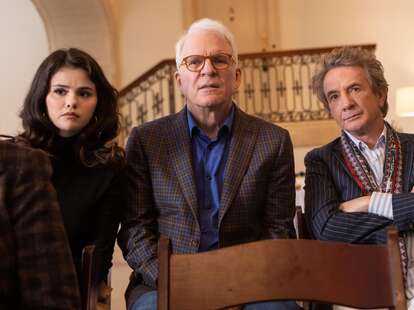 ‘Only Murders in the Building’ | Hulu

‘Only Murders in the Building’ | Hulu

There are few better ways to end a stressful day than sinking into the couch with a beer in hand and funny TV show on the tube. Hulu—and its network subsidiaries that include ABC, FX (and the FX on Hulu hub), and Freeform—has carved out a nice chunk of the comedy TV market with its slate of Hulu Originals and longstanding classics. When you need to boot up a new comedy or need to figure out where to watch an old favorite, here are some underrated and beloved titles to add to your binge list.

Sterling Malory Archer (H. Jon Benjamin), a booze-, sex-, and turtleneck sweater-loving international spy with indelible narcissism, lands himself in many-a caper he has to crawl his way out of to avoid the wrath of his spy agency, headed by his mother Malory (voiced by the ineffable Jessica Walter) and staffed by a bunch of foul-mouthed CIA rejects. Plenty of Arrested Development alums round out the voice cast of FX’s debauched Emmy-winning James Bond parody with a license to cross the line, but the VIP is Aisha Tyler as the no-bullshit agent Lana Kane. A must-watch for anyone who wishes Daniel Craig would smile once in a while.

You’ve seen the kids are brats and parents are exhausted dynamic on TV many times before, but you haven’t seen it as tender and impactful as it is in Pamela Adlon’s Better Things. The series co-created by and starring the comedian follows her character Sam’s goal of trying to survive as a middle aged actress raising three daughters and taking care of her mother on her own. As it turns out, that is no small feat—especially as a single mother—and this brutally funny, bittersweet series shows that though its close observations of family dynamics. It also provides powerful commentary on culture, feminism and the strange sexuality of plunging toilets, which makes it worth watching.

If you’re staying in, you’re gonna need some serious streaming options. With Hulu having thousands of shows and movies, you have access to a multitude of shows for every possible mood. Find new titles or revisit the classics. Plus, with the wide variety of Hulu Originals, you might even find your next fave series to binge watch with your friends. All you have to decide is what you’re watching tonight.

In this Hulu Original, Billy Eichner and Julie Klausner are mean-spirited and petty New Yorkers who live by the “no hugging, no learning” code, which makes them our favorite kind of platonic power couple. But with every exploitative adventure anchored by their best friendship, the jokes they make at the expense of others (interns, New Jerseyans, Method Man) seem downright sympathetic.

Fun fact: Mitchell Hurwitz—you know, the dude who created Arrested Development?—did a lot of his early work on here. Other fun fact: This sitcom, about four previously married women (including Betty White!) living together in Miami, is legitimately one of the best and funniest in TV history. Embrace this opportunity to watch every single episode, and, whatever you do, do not write these gals off.

Few shows make us consistently laugh-cry like It’s Always Sunny in Philadelphia, a dark cringe-comedy about a group of depraved jerks (comedy heavyweights Charlie Day, Glenn Howerton, Rob McElhenney, Kaitlin Olson, and Danny DeVito) doing horrible things to each other and the people around them. Even with 14 seasons (and counting), don’t worry about binge-watching from the start—It’s Always Sunny is the perfect show to drop in and out of. Even decade-old episodes keep the lovable dirtbags of Paddy’s Pub up to recognizable, juvenile antics.

“There are 5,000 people in Letterkenny. These are their problems,” so begins every episode of this comedy. Co-created by Jared Keeso, who stars as the small town’s resident tough guy Wayne, this web series-turned-Canadian comedy/Hulu Original focuses on best friends shooting the shit about whatever’s going on in their hometown. While both a lot and nothing at all happens in this sitcom, the series has developed its own language over the course of its eight seasons and is known for its speedy exchanges and relentlessly recurring in-jokes. The attention to detail and expertly crafted dialogue makes Letterkenny a must-watch sitcom, which isn’t something you might expect from a show set deep within the grassy farmlands of Ontario.

Steve Martin, Martin Short, and Selena Gomez play an intentionally odd throuple in this comedy-mystery, and the show is delightful for it. At its start, the three have nothing in common, aside from the fact that they all live in the same Upper West Side apartment building and are true crime podcast obsessives. It’s that shared interest that brings them together when another one of their neighbors is killed under strange circumstances, and they’re determined to put their sleuthing skills to work. With a handful of guest stars coming through the complex’s revolving door, a picturesque backdrop just off the westside of Central Park, and caper twists galore, the series couldn’t be more charming. Who knew a satire of contemporary media could be so damn adorable?

Middle school sucks. But in retrospect, it’s so cringeworthy and melodramatic that it makes for one giant playground of great comedic material. From comedians Maya Erskine and Anna Konkle comes this Hulu Original in which the adult women go back to the junior high halls that haunts every one of us, playing 13-year-old versions of themselves in the early aughts, surrounded by actual preteens. The show, which counts The Lonely Island among its executive producers, hits on many of the topics you’d expect of a coming-of-age comedy: masturbation, young love, AIM, and cigarettes, to name a few. But it’s the awkward delivery, the attention paid to the feelings and hormones coursing through the veins of the characters, that inspire some of the funniest moments. It’s uncomfortable and funny and painful and wistful, probably like your memories of middle school.

The FX on Hulu comedy about four friends living on a Native American reservation in Oklahoma—and trying every way they can to make enough money to leave—mixes irreverence and melancholy in a wonderful, revolutionary way. Created by Sterlin Harjo and Taika Waititi and centering Indigenous people, the series has been hailed as one of the best of 2021. Get on board now.

In 2014, New Zealanders Jemaine Clement of Flight of the Concords fame and funny man director Taika Waititi (Thor: Ragnarok, Jojo Rabbit) created a mockumentary about a flat full centuries old vampire roommates, and just a few years later America got the bite to make a stateside, series adaptation of the very funny cult comedy. While the original stars don’t appear, Clement and Waititi produced this FX series, found a hysterical lead cast in Matt Berry, Kayvan Novak, and Nastasia Demetriou, and gave it an update, settling the blood-suckers in an apartment in modern day Staten Island. They may be undead, but this vampire gimmick show is seriously full of life and laugh-out-loud silly.

Before Aya Cash was playing the worst (ideologically speaking) superhero on TV in Season 2 of The Boys, she was in one of the worst relationships in TV history across five seasons of You’re the Worst. The FX series, about the toxic push and pull between a stressed out music publicist (Cash) and narcissistic author whose career is in free-fall (Chris Geere), managed to be one…