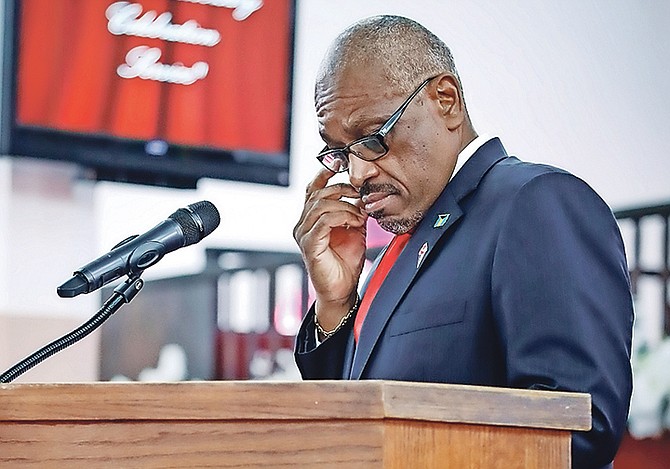 Former Prime Minister Dr Hubert Minnis wipes a tear away at a church service yesterday marking 50 years of the Free National Movement, during which he thanked supporters having ruled out any bid to continue as party leader.
Photo: Racardo Thomas/Tribune Staff

AFTER announcing on Friday that he will not let himself be nominated for leader at next month’s convention, former Prime Minister Dr Hubert Minnis cried during a church service yesterday while thanking his supporters and emphasising his commitment to the Free National Movement.

“As a former prime minister and whatever role is assigned to me, I will support the work of the opposition to advocate on behalf of the Bahamian people and to hold the government accountable. It has been an extraordinary privilege to serve our country as prime minister and as member of Parliament,” he said, fighting back tears.

Several times during his speech, Dr Minnis had to pause as he became emotional.

“We all need God’s grace. Where I have made mistakes I ask for your forgiveness. I am not perfect and I never will be,” he said, his words bringing many of the attendees in the church to their feet in applause.

He thanked his wife Patricia and his family for their support during his time as prime minister.

“To the Bahamian people, I say a warm and heartfelt thank you for my time being your prime minister. You, the Bahamian people, are a strong, hard working and resilient people. “Hurricane Dorian did not break you, the pandemic has not broken you, your trust in the God has brought us this far.”

Dr Minnis also maintained his commitment to the FNM.

“I have been an FNM from my youth. I have no other political home or affiliation. I will remain loyal and faithful to the Free National Movement and its values,” he said.

His speech came as the FNM celebrated its 50th anniversary with a service at the Church of God of Prophecy, East Street Tabernacle. At the event, Dr Minnis also touted the various things his administration achieved during its four year term.

Dr Minnis said in a statement on Friday that he will not nominate for leadership of the party when the FNM holds a one-day leadership convention on November 27, nor will he allow his name to be placed in nomination.

The statement came amid speculation that although he told FNM executive committee and Central Council members last month that he will step aside as leader, he would still vie for the post if someone nominates him.

“At the end of November, the Free National Movement will hold a one-day convention to elect the leader of the party. I will not nominate for the leadership nor will I allow my name to be placed in nomination. I wish those who will contest for the leadership the very best,” his statement on Friday noted.

“I will continue to serve in the House of Assembly as the member of Parliament for Killarney. I again thank the constituents of Killarney for their support since 2007 and during the recent general election,” his statement said.

“We remain in a deadly global pandemic. I will continue to promote measures to save and to protect the lives and livelihoods of Bahamians, utilising my experience in office and as a medical doctor. I will never tire in advocating for the needs of the poor, the disadvantaged and the more vulnerable in our society.”

Dr Minnis’ statement on Friday came hours after former Prime Minister Hubert Ingraham told reporters that it was clear the FNM would have a new leader after its convention.

“It is clear as day to me, that the current leader of the FNM will no longer be leader of the FNM after the convention on November 27,” Mr Ingraham said. “He has already told us he’s not running for the office anymore and the party has determined it will hold a one-day convention for the sole purpose of electing a leader. And that is what is going to happen.”

Only Central Grand Bahama MP Iram Lewis has confirmed publicly that he will run for the leader at the convention. Marco City MP Michael Pintard is also expected to seek the post. According to sources, East Grand Bahama MP Kwasi Thompson is leaning towards running for the post as well.

On Thursday, St Barnabas MP Shanendon Cartwright said he is considering running for a leadership role in the FNM but stressed that such a role goes beyond leader and includes deputy leader or party chairman.