Ever had one of those dreary old days when a new dress is the only thing that might cheer you up? Trust me, I’ve had plenty. And it was on just such a day — dank, autumnal, a palpable lack of anything to look forward to, with a deep craving to shop nibbling at me — that I had an unexpected conversation that was to change my life for ever.

I met my friend Lauren, and while she sipped her coffee, she dropped a bombshell.

‘I’ve been thinking. I’m so sick of having a bad day at work, wandering around Oxford Street to cheer myself up and coming home with bags of stuff I don’t really want and feeling worse. I keep reading more about how clothes are made, how most of the process is terrible for the environment — and worse for the people who make them. So I’m going to go a whole year without buying new clothes.’

‘A not-New Year!’ I said. ‘That sounds like a good idea. But I could never do it. What about underwear? What about special occasions?’ 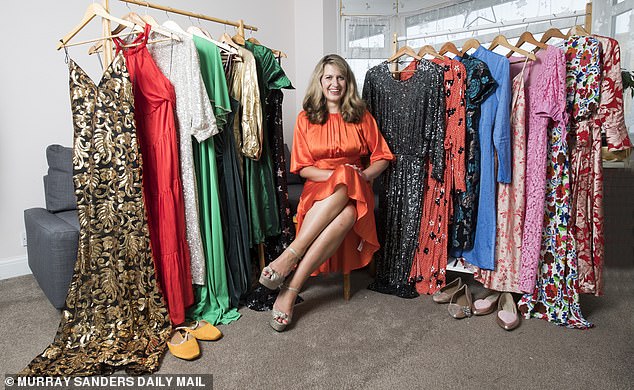 Daisy Buchanan, who lives in Kent, could spend up to £400 a month on clothes at the height of her shopping addiction. Pictured: Daisy with some of her clothes

Then panic prickled at the back of my throat as another thought arose. The suitcases and carrier bags under my bed.

The squashed, sequinned dresses within them, secreted away. Untold amounts of money spent. Clothes I had binge-bought, purchased for a woman with a different body and a different life. I had already shopped for hundreds of hypothetical special occasions that were yet to take place.

‘You’re a braver woman than I,’ I said, shaking my head.

That was almost exactly three years ago, a time when I could spend as much as £400 a month on clothes.

My money went on piles of elaborate dresses from cheap websites, such as Boohoo, and endless occasionwear. It was a real problem, not least because I rarely wore anything I bought.

Working from home, I lived in jeans and jumpers — I didn’t even go to an office where I was required to look smart.

Take, for example, the dark green backless satin cocktail dress that, yes, was far too small, but was also discounted by 70 per cent. Surely by the time I’d lost weight, I thought, the right party would present itself?

Whenever a special occasion arose, I’d use it as an excuse to buy yet more outfits, even though I already had enough to clothe every guest going. 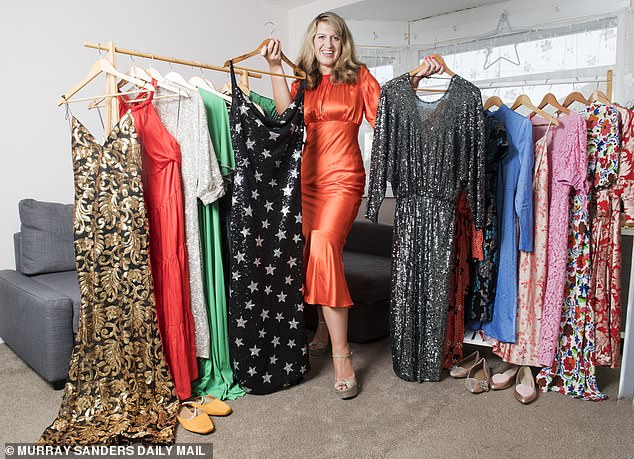 I was asked to speak at a white-tie dinner, and bought five full-length, glittering ballgowns. I promised myself I’d send back the ones I didn’t wear, but instead hoarded them all, even the ones that didn’t fit properly.

‘One day, I’ll be able to wear these,’ I told myself, hiding them under my bed.

Today, though, I no longer buy new clothes and have faced up to the fact I was a shopping addict. My endless spending was an attempt to ‘fix’ the things I didn’t like about myself, to bury my feelings under a pile of sparkly frocks, of must-have dresses that failed to heal the void I had inside.

Now, instead of Asos’s fast fashion or seductive items from Selfridges, on those occasions when I do have to buy something, I buy second-hand or ‘pre-loved’. It’s saved me money, and contributed to saving the planet — but I firmly believe it’s saved me, too.

Because in the months and weeks after my chat with Lauren, I reached something of a critical point with my shopping and myself.

Clothes failed to heal the void I had inside

It came to a head as I was opening a dress I’d bought just because I’d seen someone wearing it on Made In Chelsea — full length, imitation silk, strappy and rose-coloured, it cost about £20 from Boohoo.

I tore through the packaging, pushing away thoughts about what all this plastic was doing to the environment, swallowed hard and slipped the dress over my head. I went to admire myself in the mirror in the hall.

It looked awful on me.

But it was very cheap, I thought defensively. About as much as a bottle of wine in the pub.

Shopping is just a hobby. I wasn’t in debt. I wasn’t spending thousands of pounds on couture. This is what I do to relax. Like skiing or golf.

Yet it didn’t feel relaxing. I was in a constant state of agitation, waiting for my next outfit to come. Then the clothes arrived and let me down. I was always hoping to find the dress that fixed everything. I’d keep spending money until I liked my reflection in the mirror. 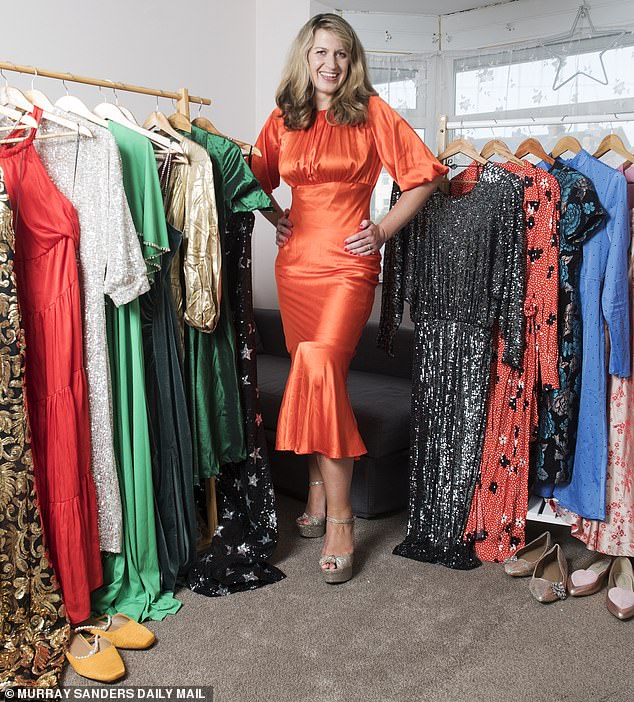 Daisy (pictured), who has stopped buying brand new clothes, said paying attention to her moods helped to break her habit

But that moment never came.

Looking back, my habit — because that’s what it was — was causing me, and the world around me, untold damage.

My very last dress was a red sequinned number from Asos, £70 in the post-Christmas sale. And in the two-and-a-half years since that day, I have stopped buying brand new clothes.

When I first quit, I believed it would just be a good test of my willpower. I hoped to find new ways to style the piles of clothes I already owned.

I certainly didn’t expect to find myself in the throes of an emotional crisis.

For the first month, the novelty of the challenge kept me going. But soon the cravings struck.

One afternoon, I was scrolling through Instagram, looking at other people’s lives and feeling bad about my own. I found myself on autopilot — and on Asos. With four dresses in my basket, I came to, and realised I needed new strategies to manage my old habits.

I was driven to shop like others are to use drugs

Deleting shopping apps was the first step, but what really helped was paying attention to my moods. If I started to feel low, I’d put my phone away and go for a long walk, or pick up a book instead.

For a long time, I couldn’t understand why I felt so low, so often. I was happily married and I’d moved beside the sea on the Kent coast. I’d just turned 33, and was at a point when I was starting to experience some success in my writing career. Yet I often felt anxious and depressed.

I started turning to authors who wrote eloquently about addiction, sobriety and vulnerability, such as Anne Lamott and Glennon Doyle, whose words on substance abuse struck an unexpected chord. Yet I still didn’t think I could be addicted to shopping. Surely addiction meant abusing a chemical substance to the point where you could no longer function in the world?

But slowly I realised I was driven to shop in the way that Lamott and Doyle had been driven to use drugs and alcohol.

They wrote about being brought up in families that had very high expectations. Just like me, they were supposed to do well in school. They never had room to share their feelings — specifically, space to express unhappiness. 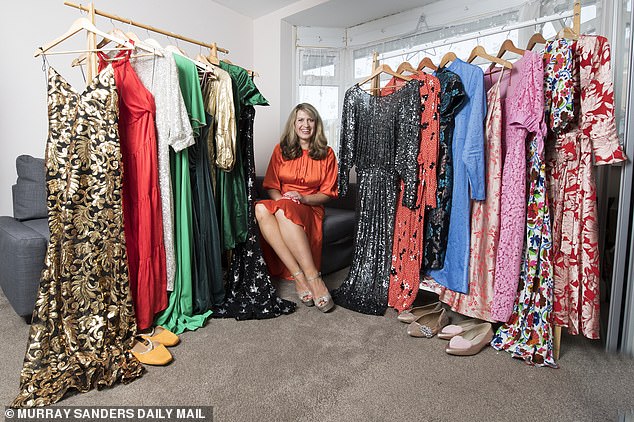 Daisy (pictured) said she had been seeking freedom from her constant, self-critical thoughts, when she bought the dresses under her bed

They did not have a chance to develop resilience, the faculty to fail. Their emotions were a problem that they had been left alone to solve.

Like them, I had grown up with a certain amount of privilege, but that came with the pressure to be perfect, all the time.

These books made me realise I had been paralysed by shame. My teenage insecurities had lingered, and I still applied them to my body and my career.

I felt like an eternal B-student in a world where everyone else had earned an A+. When I shopped, it was to distract myself from the fact that I never felt ‘good enough’. I cried when reading these women’s stories.

I’d become so good at finding ways to feel numb that I’d been keeping my sadness secret from myself. A particular phrase kept coming up, as maddeningly catchy as the chorus to a pop song: ‘Build a life you don’t want to escape from.’ Those words…