Welcome to our new Binge Report format, where instead of tracking binge sessions, we are now keeping track of the most popular movies and original TV shows that Americans have been streaming in the last week. For those interested in Australian numbers (provided to us by streaming search engine JustWatch), please have a look here

The TV Time app (iPhone and Android) helps users organise their streaming plans. The data here is tracked from American users of the app and some shows listed are not available in Australia without the use of a suitable VPN.

The weekend of October 22 – 24 was a busy one for HBO Max, mostly down to the release of “Dune” (HBO Max) in first place. It’s one of the last prestigious A-list movies to get a simultaneous theatrical/HBO Max release, but possibly one of the most controversial, as this movie is really much more suited to the big screen than say a movie like “The Many Saints of Newark”, also on HBO Max. The latter was 9th on the streaming movie chart.

Also new to the top 10 was Netflix’s vampire movie Night Teeth, in third, while the original “Scream” (AMC+) replaces “Scream 2” in this week’s chart.

“Cruella” from Disney+ gets back into the top 10 after last week’s exit.

“Scream 2”, “Tusk”, “There’s Someone Inside Your House”, and “Muppets Haunted Mansion” all left the top 10. 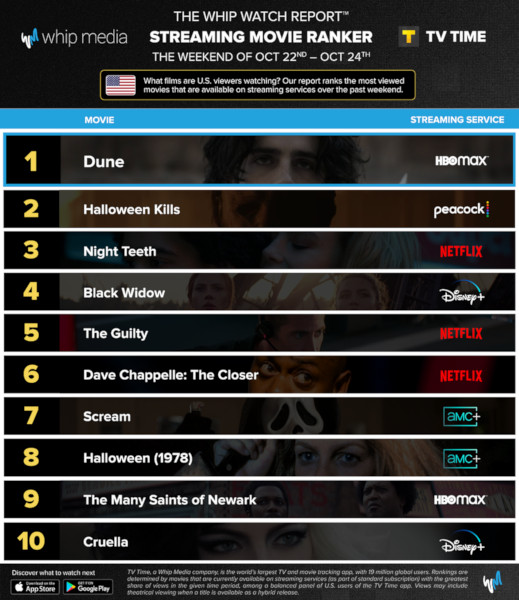 In streaming originals, a new season of Netflix’s Locke & Key helped it get to a 4th place finish in this week’s chart. The only new entry in the top 10 was “Young Justice” (HBO Max) in 8th. 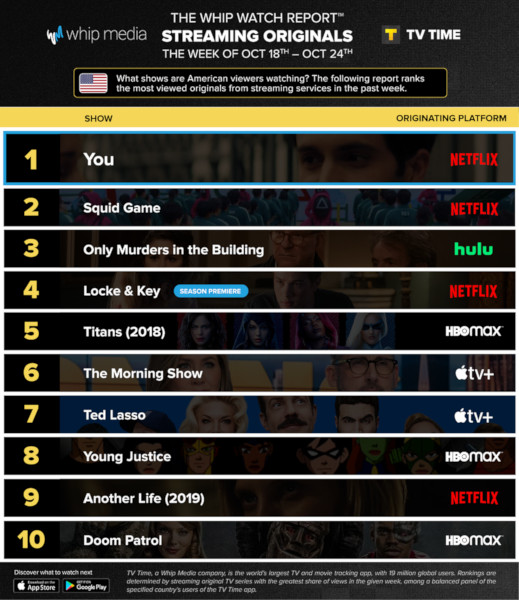