THE SHOW | Dead to Me

THE PERFORMANCE | Before we even laid eyes on the Netflix dark comedy’s series finale, Applegate had already been turning in some of her funniest and most heartfelt work in Season 3’s preceding nine episodes. But in Episode 10, aka the show’s swan song, the beloved TV vet cleared her own very high bar, delivering the best performance of her career in the process.

The prospect of Applegate’s Jen losing her partner in literal crime Judy (Linda Cardellini) to cancer infused Dead to Me‘s final season with uncharacteristic emotional weight and, in turn, allowed the Married With Children alum and comedic powerhouse to flex her considerable dramatic chops (while simultaneously nailing zinger after zinger). That was particularly true in the finale, which found Judy succumbing to her Stage 4 diagnosis.

As the episode began, Jen remained very much in denial that Judy’s time was running out. But Applegate masterfully guided her alter ego into the perilous acceptance stage in tiny, heartbreaking increments, the first of which arrived when Jen came face-to-face with the ’66 Mustang that took her husband’s life. As Jen rejected Judy’s directive to “bash the sh-t” out of the PTSD-triggering vehicle with a golf club, Applegate subtly lowered her character’s guard long enough for Jen to quietly, tearfully unload the most healing of truth bombs: “How could I hate it? It brought you to me.”

When Judy later tore the bandaid completely off, revealing to Jen that their three-week vacation would, for her, become a “permanent” one, Applegate allowed us to glimpse Jen at her most vulnerable and emotionally present. Clinging to her BFF for dear life as tears streamed down both of their faces, Jen told Judy, “You changed my life.” Applegate’s ability to ground the moment with a beautifully restrained combo platter of pain and gratitude only added to its resonance.

Applegate recently suggested to Variety that her MS diagnosis could force her into early retirement, with Dead to Me potentially being her final role. Selfishly, we hope that is not the case. As this episode — and the season as a whole — have demonstrated, she is only just beginning to tap into her considerable powers.

HONORABLE MENTION | The series finale of The Walking Dead (recapped here) was marked by fine performances, in particular from Melissa McBride, Lauren Cohan and Jeffrey Dean Morgan. But Christian Serratos still managed to stand out, by giving us a farewell to Rosita that was at turns thrillingly fierce and stunningly vulnerable. As Coco’s mother saved her from the Commonwealth’s nursery from hell, the actress went into turbo-charged action-heroine mode but added an underpinning of emotion that made Rosita’s franticness all too real. (Is anyone’s heart not still in their throat from her fall backwards into the horde?) Then, when the badass revealed to bestie Eugene that she’d been bitten, Serratos tempered the sadness of the moment with an understated dignity that made Rosita’s inevitable end that much more poignant. 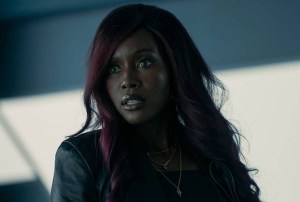 HONORABLE MENTION | With greater power comes greater responsibility. And as Titans‘ Kory came to realize that with greater responsibility comes frankly impossible decisions, Anna Diop dove into some of her best material in a while. As Kory and Rachel tried to save Sebastian Sanger’s bacon by hiding him away until the prophecy had passed, Kory was challenged by her onetime mentor Zadira to fulfill her fate and instead kill Mother Mayhem’s son. Diop, now embracing Kory’s agency like no season before, communicated both her alter ego’s resolve, but also the struggle within — especially when Kory got a peek at a future that was idyllic… then postapocalyptic. When Mayhem herself found her way into the diner to claim her kid, Diop again embodied Kory’s might, albeit in a sadly losing battle. 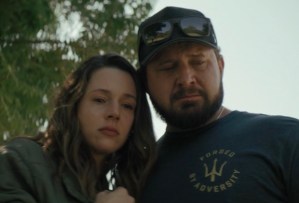 HONORABLE MENTION | AJ Buckley and Alona Tal both delivered, and then some, in SEAL Team‘s season finale, which brought Sonny and Stella together for the first time since Clay’s death. Buckley got our waterworks going when Sonny stood at Clay’s headstone and assured his late BFF that he would fulfill the promise he made to take care of Stella and wee Brian. When Tal then joined Buckley in the scene, the actors made you feel their characters’ shared heartache and near inability to speak. Tal later capped her own fine performance when Stella assured Jason that she did not begrudge him the Navy Cross he was to receive, since his heroics allowed Clay to get home and be a father — if only for a time. Both Tal and Buckley took their years on the show, and their characters’ rich histories, and turned them into something tragically beautiful.

Natalie Mordovtseva and Josh get into an argument about their relationship

Chicago P.D. fans tell NBC what they want for the holidays