Deaths directly caused by alcohol soared by 20 per cent during the first year of the Covid pandemic, Government figures revealed today.

The North East was hit hardest, with fatalities spiking by almost 80 per cent.

Drinking too much alcohol can kill by causing liver damage, as well as cancer.

Deaths caused by alcohol have been increasing for a decade but ministers called the jump during the pandemic ‘deeply concerning’.

They pledged to increase treatment options for alcohol dependence, with £3.3billion in place for public health services over the next year.

But Labour hit out at No10 for slashing addiction services and ‘doing nothing to give people who need help with addiction the support they need’.

Charities urged No10 to address mounting alcohol abuse following the pandemic to prevent a ‘liver disease epidemic’ after ‘Freedom Day’ on Monday. 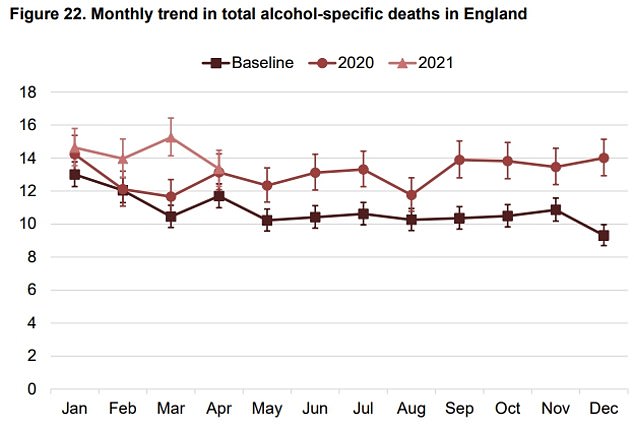 Deaths directly caused by alcohol reached record levels last year after Covid lockdowns drove binge drinking at home, a study by Public Health England has suggested. Graph shows: The number of alcohol-specific deaths per 100,000 in England each month in 2021, 2020 and the baseline average taken from 2018 and 2019 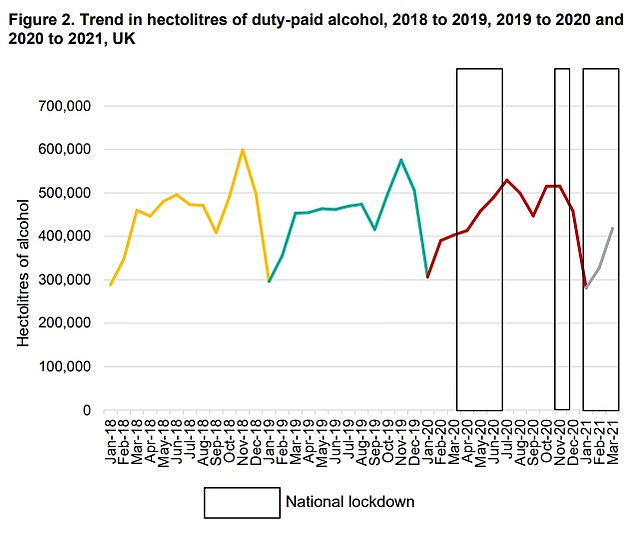 Despite pubs, clubs and restaurants during the national lockdowns, the total amount of alcohol released for sale during the pandemic was still similar to the pre-pandemic years, suggesting people were drinking more at home, PHE said 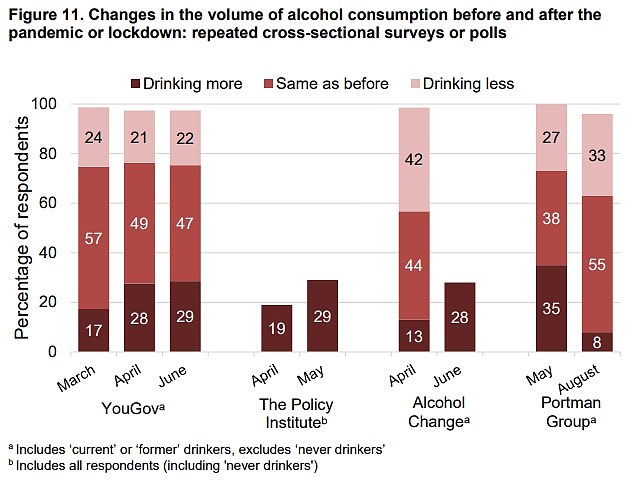 PHE data showed the number of alcoholic liver deaths — caused by a build-up of fat on the organ caused by excessive drinking — jumped 21 per cent from 2019 to 2020.

The biggest increase in drinking during lockdown was seen in the North East, which peaked at 28.4 deaths per 100,000 population in July.

Despite pubs, bars and restaurants being shut for several months during lockdowns, the total amount of alcohol sold last year was still similar to the pre-pandemic years, PHE said.

And the number of men and women drinking at a ‘high risk level’ increased by 58.6 per cent during the lockdown in March this year compared to the year before.

The amount of people drinking at high risk levels — 50 units for men, 35 for women — was also highest in March this year, having risen in the first lockdown and stayed at high levels throughout the pandemic. 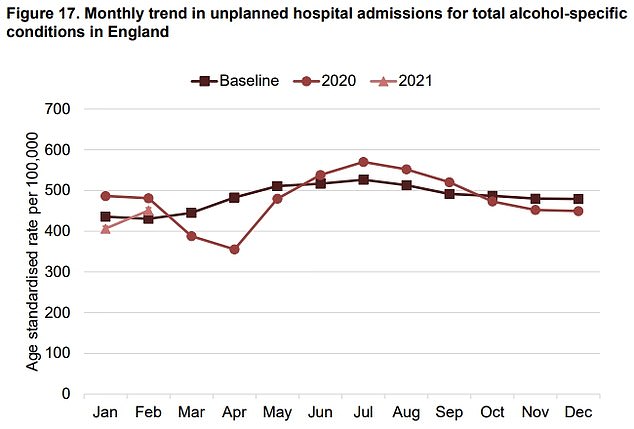 Unplanned hospital admissions for alcoholic liver disease per 100,000 increased by 3.2 per cent between 2019 and 2020 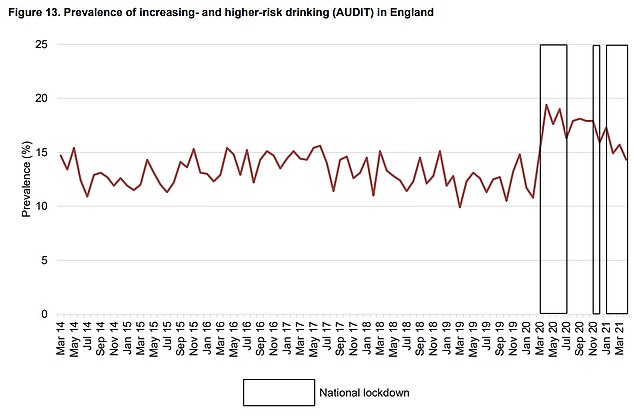 And the number of men and women drinking at a ‘high risk level’ increased by 58.6 per cent during the lockdown in March this year compared to the year before

PHE’s director of drugs, alcohol, tobacco and justice Rosanna O’ Connor said: ‘Our research suggests that lockdown has affected heavy drinkers the most and that they are drinking more.

‘Liver disease is currently the second leading cause of premature death in people of working age and this is only set to get worse if the Covid pandemic results in a long-term increase in drinking.

WHAT IS ALCOHOLIC FATTY LIVER DISEASE?

Alcoholic fatty liver disease is caused by too much fat being stored in the organ’s cells.

The disease can cause scarring and irreversible damage to the liver, and can progress to cirrhosis (scarring) and organ failure.

Fatty liver disease usually causes no signs and symptoms, but they can include an enlarged liver, fatigue and abdomen pain.

The illness is caused by obesity, insulin resistance, high blood sugar and high levels of fat in the blood.

Risk of contracting the disease is increased in people who drink excessively regularly.

It is reversible. If you stop drinking alcohol for 2 weeks, your liver should return to normal.

‘Tackling harmful drinking must be an essential part of the Covid recovery plan.

‘If you’re worried about your drinking speak with your GP or get in touch with your local alcohol services.’

Although alcohol related cirrhosis can take a decade or more to develop, most alcohol deaths occur because of liver failure due to recent heavy drinking.  Liver mortality rates in England increased 43 per cent between 2001 and 2019, and now liver disease is the second leading disease causing premature death among people of working age.

Conservative Minister for Public Health Jo Churchill said: ‘This evidence of increased alcohol-related harm during the pandemic is deeply concerning.

‘I am committed to addressing this and widening the availability of treatment services at both a local and national level.

‘The new Office for Health Promotion will spearhead our efforts to improve treatment and level up outcomes.

‘Over the last year, providers have continued to support and treat people misusing alcohol and we are backing local authorities, who know their communities best, with over £3.3billion in 2021-2022 to spend on public health services including alcohol treatment.’

He said: ‘This is yet another tragic reminder of the devastating toll of alcohol addiction.

‘Sajid Javid’s top down NHS reorganisation that he is now pursuing will sideline public health services and undermine attempts to tackle the addiction crisis, doing nothing to give people who need help with addiction the support they need.’

Some £26million worth of drug and alcohol dependence services were cut between 2013 and 2020.

Analysis by the Royal College of Psychiatrists found that eight of the nine regions in England made real terms cuts.

And the chief executive of the British Liver Trust called for ‘urgent action’ from the Government.

Pamela Healy said: ‘Covid restrictions may have eased but now we’re starting to see the long-term effects of the pandemic in other areas of public health.

‘We need urgent action to tackle the complex underlying causes of excess alcohol consumption to avoid a liver disease epidemic in the future.’

DO YOU DRINK TOO MUCH ALCOHOL? THE 10 QUESTIONS THAT REVEAL YOUR RISK

One screening tool used widely by medical professionals is the AUDIT (Alcohol Use Disorders Identification Tests). Developed in collaboration with the World Health Organisation, the 10-question test is considered to be the gold standard in helping to determine if someone has alcohol abuse problems.

The test has been reproduced here with permission from the WHO.

To complete it, answer each question and note down the corresponding score.

0-7: You are within the sensible drinking range and have a low risk of alcohol-related problems.

Over 8: Indicate harmful or hazardous drinking.

8-15: Medium level of risk. Drinking at your current level puts you at risk of developing problems with your health and life in general, such as work and relationships. Consider cutting down (see below for tips).

16-19: Higher risk of complications from alcohol. Cutting back on your own may be difficult at this level, as you may be dependent, so you may need…