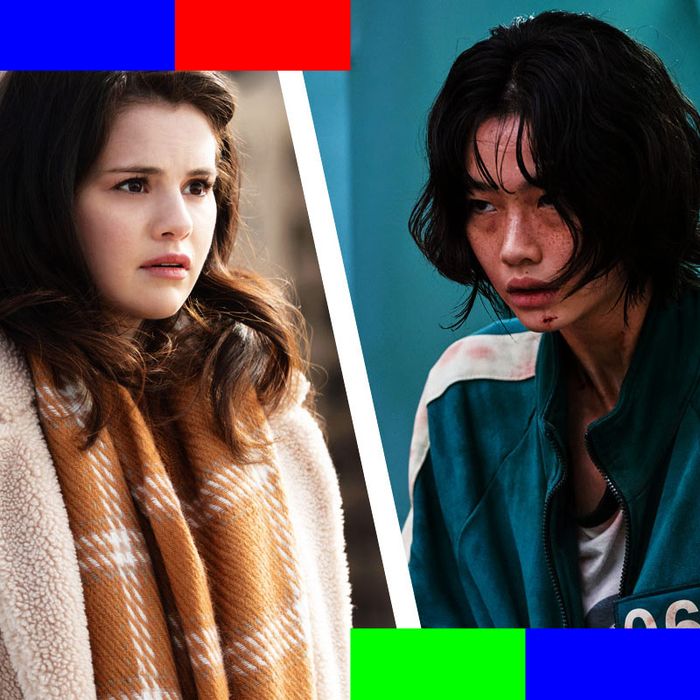 Only Murders in the Building built momentum week by week, whereas Squid Game came out of the gate all at once.
Photo-Illustration: Vulture; Photos by Hulu and Netflix

This story first ran in Buffering, Vulture’s newsletter about the streaming industry. Head to vulture.com/buffering and subscribe today!

The TV industry has been debating the wisdom of Netflix’s binge release model since that Super Bowl weekend back in 2013 when the streamer dropped the entire first season of House of Cards all at once. Netflix argues its approach is best because it prioritizes customers, and that younger audiences in particular want to feast on big batches of content all at once rather than have episodes spoonfed to them over a few months. Hollywood’s old guard makes the case that tossing out a full season in one day dramatically shortens a show’s pop-culture half-life and makes their art feel disposable. So who’s right? The smashing success of two recent releases — Netflix’s Squid Game and Hulu’s Only Murders in the Building — makes a case that maybe it really doesn’t matter.

As this column detailed last week, Squid Game took the world by storm within just a few days of its first nine episodes hitting Netflix, and three weeks later there’s no sign of the buzz surrounding the show dying down; it’s arguably still gaining momentum. The growing interest in the show is happening even though Netflix hasn’t released a single new episode since September 17. If anything, Netflix’s binge model may actually be working to Squid Game’s advantage because it allows the streamer to create a sense of urgency among its members and stoke the flames of FOMO. Folks who hear what a wild, twisty ride Squid Game offers have an incentive to watch and finish season one as quickly as possible so as to not have any part of the journey spoiled. Plus, because there’s so much content so quickly, it allows for more memes to sprout up quickly and for fandoms around various characters to almost instantly take root.

And yet over on Hulu, Only Murders, which debuted 18 days before Squid Game, has been having an impressive run of its own via a modified episodic release. Hulu dropped the first three episodes of the show on August 31, and per Nielsen, the Steve Martin–Selena Gomez–Martin Short dramedy was an instant hit. The ratings giant says the initial 97 minutes Hulu made available to stream accumulated 444 million minutes of viewing in the U.S. during its first week on the service. That put it in the top five for the week among streaming originals, and compared favorably with the average per-minute consumption a week earlier for the Netflix drama Clickbait, which debuted with eight roughly 45-minute episodes.

But here’s where Hulu’s weekly approach has paid off: Parrot Analytics, which measures audience demand for streaming content around the world, says Only Murders has gone from being the 99th most in-demand show in America a week after its debut to the 19th most in-demand show on September 29, the day after its much-lauded episode “The Boy From 6B” debuted. The show’s global performance has been even stronger, with Only Murders ranking as the 15th most in-demand show around the world at one point last week. Another third-party measurement site, Ranker, is also seeing strong numbers for the series. For the month of September, Only Murders came in at No. 4 on the company’s “watchworthy” index, which measures audience interest in shows based on how often users of Ranker’s app engage with a title through searches, trailer views, watchlist adds, and other interactions. About 88 percent of all users have favorable sentiments toward the show.

Now, by all available metrics, Squid Game and Only Murders aren’t in the same league in terms of overall cultural impact right now; the Netflix series is a juggernaut. But both are managing to get more popular every week despite being released in very different ways, and I don’t think each platform’s distribution strategy has made much of a difference one way or the other. Sure, the FOMO factor is definitely getting more eyeballs on Squid Game more quickly, but had Netflix released only the first episode of the series on September 17, I’m guessing the online reaction would have still been massive and prompted viewers to see what the fuss was all about, while the twists in subsequent episodes would have kept that buzz going.

Similarly, Only Murders is such a well-structured, endlessly surprising journey, and the star power attached to the show is so dazzling, that the raves about the series likely would have resonated for weeks or even months after a hypothetical binge release. And once awards season kicked off in December and January, the din around the series would have picked up again. A binge model might have made it harder for Hulu to pull off the clever episodic promotions it’s been doing on behalf of Only Murders — like the gaggle of Tie-Dye Guys the streamer unleashed all over New York a few weeks ago — but I don’t think the show would’ve fallen through the cracks at all.

The fact is, although the episodic and binge models both have their advantages and downsides, I have yet to see any data proving one strategy is definitely and consistently better than the other. Episodic stans point to Ted Lasso as the ultimate example of how a weekly release can build momentum for a show, but while the Apple TV+ absolutely got more popular over the course of its eight-week initial run in summer 2020, I’d be willing to bet its biggest overall audience growth came in the months following its season-one finale — you know, when people started bingeing all ten episodes. On the other hand, the episodic model for Ted has helped fuel weeks of discussion and debate around the series this season, a conversation that almost surely would’ve come and gone within two weeks had Apple done a Netflix and put them all out at once. It also probably boosted the show’s Emmy campaign, which paid off with several spectacular wins last month.

If I sound pretty indecisive about the whole binge-versus-episodic debate, well, it’s because I actually am — and I think streamers should be similarly agnostic. Netflix’s introduction of the binge model represented a fundamental shift in TV, and I think it was massively important to the streamer’s early success. It put customer satisfaction ahead of a short-term need to keep audiences engaged longer by stringing out a show’s run over a few months. And even now, I think most consumers, even ones like me who actually do like watching episodes once a week, greatly value being given a choice in the matter. For series with complicated storylines, being able to get through a serialized plot is a lot easier to do when you don’t have to wait a week in between episodes. I don’t know, for example, that Apple TV+ is doing The Morning Show’s second season, or Foundation’s first, any favors by having them unspool over three months. Same goes from FX on Hulu’s dense, multilayered sci-fi yarn Y: The Last Man.

At the same time, as Netflix moves into every form of TV imaginable, its dogmatic belief that (almost) all shows must be binged doesn’t always serve viewers well. Procedural dramas and multi-camera comedies thrive when audiences are deeply invested in relatable characters viewers want to return to again and again, in some cases almost like family. Shows such as Grey’s Anatomy or Friends are deeply enjoyable as a binge, but they thrived because Meredith and Chandler and Joey and McDreamy were weekly fixtures in folks’ lives for literally hundreds of episodes, spread out over a decade or…