Do things that scare you (like singing), walk away from anger and binge-watch decorating shows. The Oscar-winning actress tells Elizabeth Day how she makes ageing glamorously look easy 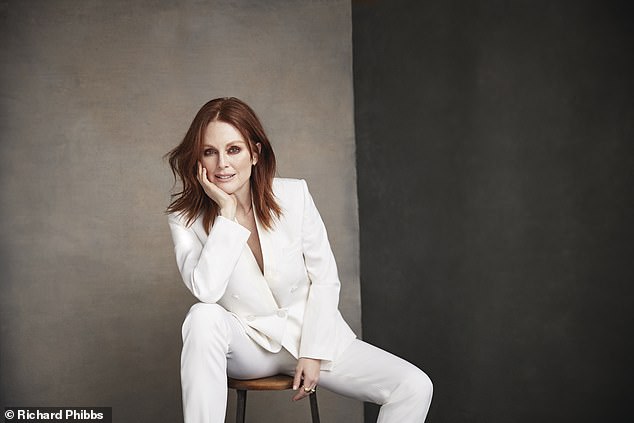 Julianne Moore, Hollywood superstar and legendary beauty, kicks off our conversation by telling me how she has spent the morning clearing up dog vomit. She and her husband, the film director Bart Freundlich, have two dogs – a ten-year-old chihuahua-mix called Milly and a labrador, Hope, whom they adopted as a puppy last November.

Usually, Julianne says, the dogs bark when they wake, but today they were suspiciously quiet. ‘Finally, I went to check on them and the little one had thrown up and pooped.’ She shakes her head, as if she can’t quite believe she’s telling me all this. ‘So I spent the whole morning taking out the dog crates, washing off the dog, cleaning up everywhere. That’s what it’s been like.’ It’s not exactly how you expect an interview with an A-lister to start, especially not one who has become a byword for a specific kind of glamour over her 36-year career. On screen, Julianne is a magnetic presence whether she’s playing a 1970s pornstar in Paul Thomas Anderson’s Boogie Nights, a struggling Alzheimer’s patient in Still Alice ‒ a part that won her a Best Actress Oscar in 2015 ‒ or, in her latest role as Heidi Hansen, the mother of a socially anxious teenager in the film adaptation of the hit musical Dear Evan Hansen.

On the red carpet, she exudes classic style. She regularly tops lists of the world’s most beautiful women and, at 60, claims to have had no work done. How does she feel about her looks? ‘I still struggle with all the freckles,’ she admits. ‘I would give anything to not have them. But you know, this is what you have. And sometimes I think that about my hair… I’m so closely identified with my red hair, it would feel weird not to have it, but then I wonder whether it might be so much easier to get dressed if I had dark or blonde hair, you know?’ 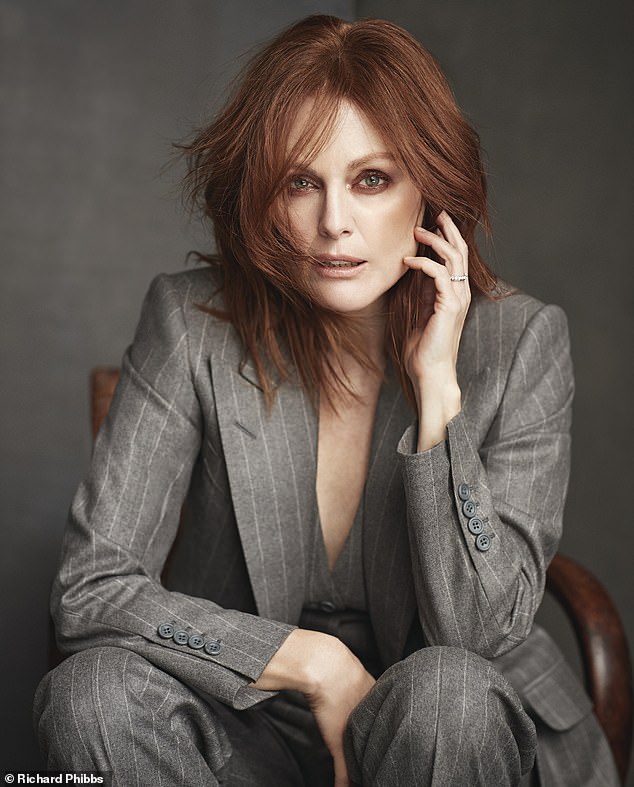 It seems anathema to me that Julianne Moore, the most famous redhead since Anne of Green Gables, should say this, but it’s also revealing that even the most beautiful people have their own insecurities.

Today she’s speaking to me from her beach home in Long Island, New York State, her famous hair tousled, her face make-up free, and it’s almost shocking how good she looks. By her own admission, she’s grateful for her colouring: her fair skin means she has always kept out of the sun, and her lack of wrinkles and seemingly magical age-defying ways have led journalists to ask her what her secret is.

To be honest, she tells me, she’s getting a bit sick of being the unofficial spokesperson for getting older. ‘It’s enough!’ Julianne says. ‘Let’s all live, not talk about dying.’

My family moved a lot. As A child I adapted to fit in by watching people and how they talk

I agree. Let’s talk about nicer things, like dog vomit. The anecdote about her beloved dogs is, I will discover, classic Julianne. Although she might look unapproachably other-worldly, what makes her compelling to watch – and, indeed, to talk to – is her abiding fascination with what makes other people tick. She is the rare celebrity who asks me almost as many questions as I ask her ‒ about everything from my marriage to my yoga studio.

Her interest in others, she says, stems from her upbringing. She was born on a military base in North Carolina, the eldest of three siblings. Her father, Peter, was a paratrooper, colonel and later a military judge, which meant the family travelled a lot when she was young. 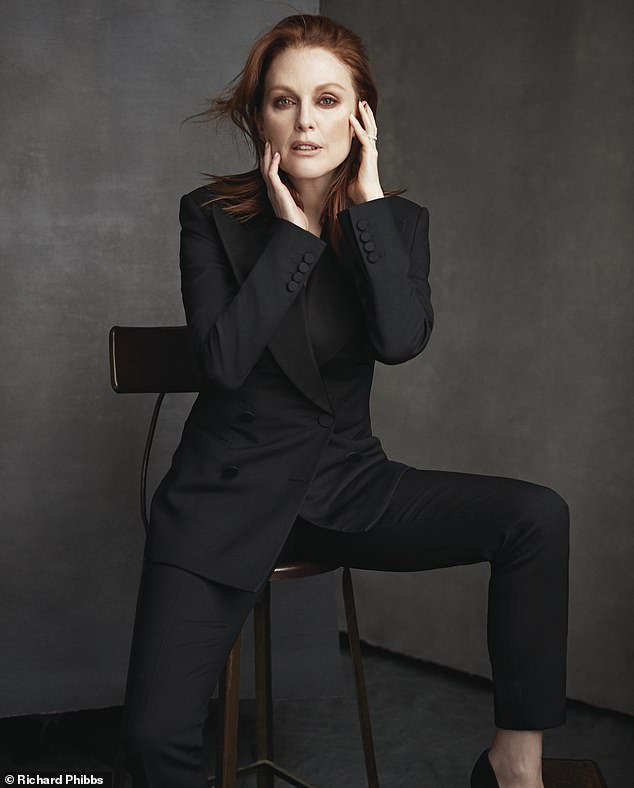 Her late mother, Anne, was a psychiatric social worker from Scotland. Over dinner, her parents would each talk about their cases, ‘so there was a lot of discussion about behaviour’ Julianne says. As the child of a military family, she changed schools frequently and learned early on how to adapt her behaviour to fit into new environments.

‘I think it teaches you to look, to watch. You always want to fit in, so you’re like, “Well, how does everybody talk here? How does everybody move? What are the cool things, what are the not-cool things?” Just trying to fit in. So you learn to adapt according to where you are and what is happening in that culture.’ She can remember ‘that real anguish of feeling like you don’t have any friends’ at school. It was a memory that served her well in her latest role.

In Dear Evan Hansen she plays the mother of the titular lead. Her son is portrayed by actor Ben Platt, who played Evan Hansen in the original stage production of the Tony-award-winning musical about a socially awkward high-school student whose classmate dies by suicide. The film tackles important issues around mental health, isolation and bullying. I tell Julianne I was sobbing within the first ten minutes. Part of what makes it so moving is that, unusually for a film musical, the actors were asked to sing live, so you hear all the raw emotion and cracking fissures of their voice. How did she find that? ‘It was terrifying!’ she laughs. ‘The last time I sang was in high-school productions. So it was a big thing for me. It was a steep learning curve to sing this song, to work with this level of musical talent and try to deliver it. Usually you have a track and you lip-synch to it. But they were insisting that we sing live; it was so scary.’ 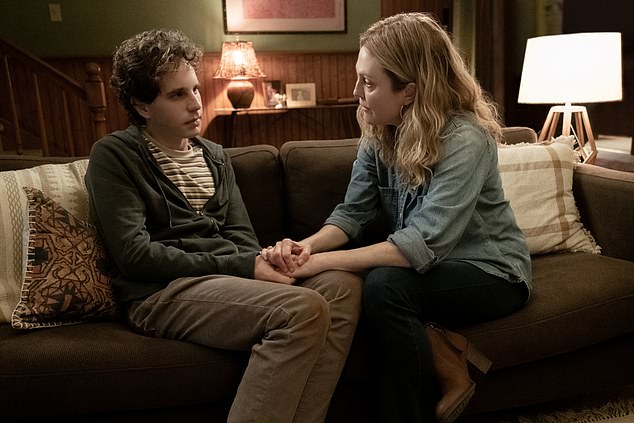 Julianne in her role as Heidi with her co-star Ben Platt as Evan, in Dear Evan Hansen

Her one song was also the last scene she filmed, ‘so I spent two months keeping my fingers crossed, hoping I’d survive’. For Julianne, filming was particularly emotional because of how it reflected her own experiences as a parent. Her children have recently moved out of the family home. Her son, Caleb, 23, is studying for a postgraduate qualification and her 19-year-old daughter Liv is starting her second year of college. It meant that Julianne’s empty nest coincided with the pandemic and led to a bigger kind of re-evaluation. She and her husband downsized from the family home in Manhattan to an apartment and bought a place on the beach in Long Island. They split their time between beach and city. She is still surrounded by boxes and hasn’t yet unpacked her Oscar statuette. ‘It’s downstairs somewhere,’ she says nonchalantly.

This new phase of life has taken some getting used to. ‘With kids, it feels like it’s the same for such a long time. Between birth until they are, I don’t know, 13 or something, it feels like it’s childhood, childhood, childhood. Adolescence is so fast because you’re talking about four years or something. And then, suddenly, they’re in college and that’s another stage. It’s like, “Wow, how did that happen?” As if on cue, Julianne’s daughter FaceTimes her and she breaks off momentarily to text her back. ‘Sorry,’ she says.

For Julianne, family life has always been a priority. She says that she found it bizarre that her generation of feminists were taught to work hard at a career with an assumption that their personal lives would just fall into place. ‘It was so very antiquated. You wait for some guy, or some romantic partner to come along. For me that happened when I was 31 or 32, I was like, “I want to be married. I want to have kids.” So I want to invest in that, too. When you say you have to work at a marriage, people always go, “Oh, it shouldn’t be that hard.” But it’s a construct, you know, everyone has to participate in it.’

In fact, she has been married once before. She tied the knot first in her early 20s to stage director John Gould Rubin but, she says now, ‘I was very young. I remember my mother said to me that I was too young and I was like, “No, I’m not!” Then, of course, yes, I was. I didn’t take the time to think about what I wanted or what I needed.’

Read More:How to be 60 by Julianne Moore