After trying to address her thoughts and feelings about money in therapy for a few weeks, my client Jasmine came into session excited to share her new revelation. “My mother’s relationship with money is making me buy ugly shoes!!”

“How?” I asked curiously, with a smile. Jasmine replied, “Mom’s always been so cheap. She drilled into me that spending more than you need to on items was wasteful and bad. So I have a closet filled with inexpensive, ugly shoes, none of which I like or feel good about myself when wearing. I experience guilt and shame for spending lots of money filling my closet with items I don’t like.”

Jasmine realized she had internalized an assumed message that somehow she wasn’t deserving of nice things, even though she worked hard and was financially responsible. She decided to own her worth and empower herself to change her relationship with spending. She changed her behaviors to buying far fewer, but nicer shoes that she felt fabulous wearing. The end result was improved self-esteem, a less cluttered closet that helped un-clutter her mind, and improved financial wellness because she actually spent less on shoes overall when she had pairs she liked. 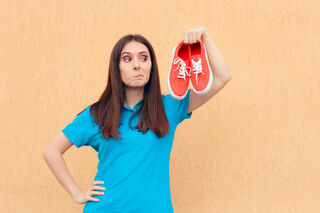 Are Your Mother’s Money Beliefs Making You Buy Ugly Shoes?

Are you frugal? An emotional spender? A binge buyer? A hoarder? A serial returner of merchandise? How you spend money is probably a lot like your parents did—or an overcorrection of their financial errors. You formed your financial habits over a lifetime.

“Money scripts” is a term coined by financial psychologists Brad Klontz and Ted Klontz in their book Mind Over Money. They write that “money scripts are underlying assumptions or beliefs about money that are typically only partially true, are often developed in childhood, and are unconsciously followed throughout adulthood.“

Money scripts are core beliefs derived from “financial flashpoints”—early life events (or series of events) associated with money. These events are powerful; they leave an imprint that lasts into adulthood. Those early childhood beliefs often drive our adult financial behaviors. Often, they are passed down from generation to generation within families and cultures and shape their financial reality.

Of these four money beliefs, money vigilance was the only behavior not linked to problematic financial behaviors; the other three were linked to potentially destructive ones. These include beliefs associated with having lower net worth, a lower income, and higher amounts of revolving credit. In contrast, money vigilant people are more likely to pay attention to their financial well-being.2

How to Address a Problematic Money Script

Is your money script holding you back? If your money belief system is causing you stress, spend some time identifying and changing what is fueling the self-defeating pattern.

To get to the heart of your money script, write down a situation or behavior you engage in around money. Then ask yourself:

The following is an example:

A research study of college students found evidence that the financial decisions of parents play a large role in their children’s financial behaviors. It’s hard to make positive changes unless we deal with emotional problems and behaviors linked with our outdated money scripts. The results provide important insight into financial education opportunities for students, parents, campus administrators, financial professionals, and educators.3

Researchers recommend that financial planners and therapists assess their client’s money scripts during the data-gathering process so they can start the conversation around the impact that money beliefs have on financial success.4 I have used this technique with my clients using cognitive behavioral therapy (CBT), thought records, and concepts from narrative therapy to help people become the author, and not merely the protagonist of their money story.

When our family’s beliefs affect our spending or saving behaviors, we are the protagonist of our own life story, but we are giving our power away to the past to determine our future. By changing our irrational beliefs and self-defeating financial behaviors, we become empowered. We are the author of our own tale of prosperity and an abundant life of holistic success and wellness.

We are in the driver’s seat and can choose whichever shoes we’d like as we put the pedal to the metal on the road to financial peace and prosperity. You are worth the work of exploring your money scripts and rewriting your narrative to cultivate mental wealth as well as emotional and financial health.

Read More:How Your Parents’ Beliefs About Money Affect You