The word “impact” means a great deal to Daniel Rothner, founder and director of Areyvut.

The Bergenfield-based organization, which was created in September 2002 to involve young people in tzedakah (charity) and tikkun olam (social justice), aims to “inspire youth to get involved within their communities in ways they have never imagined, while also helping them to realize the immense power they have to make their communities and the world at large a better place.”

The impact Mr. Rothner envisions is twofold. Certainly, the mitzvah projects Areyvut creates benefit the recipients of those efforts. But also, he believes, “getting [people] involved from a young age in doing them is a powerful experience, lifelong in nature.” And that impact, he said, is immeasurable.

Some of Areyvut’s volunteers are repeat helpers, he said. “People continue after their school years. If they connect to a cause or an agency from a young age, they will turn out to help hundreds of times throughout their lives.” Engaging in chesed, kindness, is comparable to the phenomenon of people who have been to Israel choosing to return many times, he said. “It becomes part and parcel of who they are.

“Ten years ago, someone asked if we wanted to be ‘wholesale’ or ‘retail,’ whether we wanted to create programs or be a clearing house for resources.” In response, Mr. Rothner opted for programs, such as teen philanthropy and mitzvah clowning. But nearly 20 years later, the organization can boast the development of resources as well; it’s created a series of infographics on both the Torah and Jewish holidays.

Mr. Rothner brought a wealth of experience in the field of education to Areyvut. Before launching the organization, he taught Judaic studies at the middle schools at HAFTR, on Long Island, and Heschel in Manhattan. At both schools, not surprisingly, he developed and implemented a variety of chesed and tzedakah projects. In addition to holding a BA in Jewish studies from Yeshiva University and an MA in modern Jewish history from the Bernard Revel Graduate School, he received a master’s of education in administration and supervision from Loyola University and principal certification from the Jewish Educational Leadership Institute in Chicago.

Teen philanthropy and mitzvah clowning are among Areyvut’s most successful efforts. The first program brings Jewish teens together to learn about charitable giving and philanthropy, resulting in the group’s allocation of funds to organizations in need. The second ties in clowning with the core Jewish values of chesed, tzedakah, and tikkun olam.

“One-shot programs also are important,” Mr. Rothner said. “They’re an hour and a half thinking about how to use your skills and talents to help other people, creating Jewish ‘wow’ moments.” He cited several projects, including one, at Sunshine Pottery, where participants create a sukkah decoration to bring home or give away. Another involved packing snack bags for Jewish Family and Children’s Services, providing an opportunity to discuss food insecurity. Through work with organizations such as Tomchei Shabbos, the children learn that this problem affects members of their own community as well as others.

With the onset of covid, Areyvut set out to address this new challenge. “We created Meals for Heroes, providing meals for frontline workers,” Mr. Rothner said. “We absorbed the cost at first, but the community was outstanding,” rallying to raise funds for the project. “We worked with kosher restaurants, who provided the meals,” he continued. The situation was win-win, since restaurants were then suffering a serious decline in revenue.

“We didn’t know how long covid would last,” Mr. Rothner said, but he knew the organization would have to transition away – at least temporarily – from its hands-on approach to chesed. “We were planning a curriculum for senior centers and nursing homes at the time, a kindness club offering mitzvah projects for every week of the year,” he said. “We made it available and it’s still available, and people are still seeing it.” So far, some 1,300 people have accessed the program.

While Areyvut has worked primarily through synagogues and day schools, “where we’re rock stars,” Mr. Rothner joked, “after covid we had people from other schools looking to us. And parents were looking for resources. We rocked the pandemic things.” The curriculum, published in April 2020, is still being used, he added. 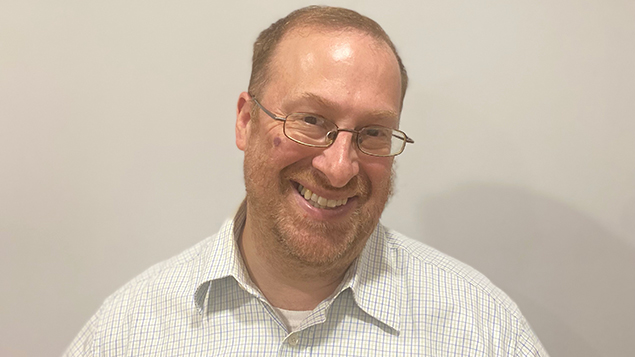 Mr. Rothner and his wife, Amy, have four children, who range in age from 20 to 13. He’s learned a great deal with and from them.

His personal experiences have helped him create easy ways for people to have an impact. He recounted the story of asking a frontline worker how he was doing, only to have that person break down in tears. “You’re the only one who’s asked,” he was told. Another of Mr. Rothner’s own practices is to leave water out for his mailman. While he used to do so only on hot days, he now does it each day. “The kids know we do this,” he said, and now have taken measures to ensure that the water remains cold.

“Covid has shown us that life is short,” he said. “If you want to make an impact, you won’t do it through binge-watching your favorite show. There are so many easy ways to make a powerful and profound difference. It’s so easy to say thanks, or how are you.” And the impact of such small gestures can be great.

Areyvut is able to reach many people through the internet, Mr. Rothner said. “We can reach anyone, anywhere. We held a program erev Yom Kippur and people in Ireland participated. Our work is national in scope, but now we can reach people even more broadly.” He also noted that social media can be used to engage people as thought leaders, to actively help others.

The erev Yom Kippur program, originally scheduled for one place, had to move to another at the last minute. Thanks to Teaneck’s Arzei Darom, he said, the program went ahead. Despite this setback, the program was oversubscribed. “We had to cut off registration,” he said.

The organization’s own impact is wide; Mr. Rothner estimates that last year the group reached “260 entities such as schools and synagogues.” When you factor in the recipients of hands-on projects, including people who receive food or clothing, and people who used Areyvut’s resources, or the hospitals and senior centers where volunteers drop off magazines, the number of those touched by Areyvut’s work climbs into the thousands — especially when you include its special events, such as the fair produced for Yeshivat Noam.

“It’s normally in person,” Mr. Rothner said. But this year it was virtual. “People from an organization in Tanzania got up at 3 in the morning and participated.”

Still, he said, nothing beats face to face interactions. He recalled that during its first year, Areyvut ran a day school program on hunger and poverty. “If you collect $500 for a food pantry, that’s awesome,” he said. “But when you do an interdisciplinary program at a Jewish day school and sensitize children to the issue of poverty,” the results are even more amazing.

Areyvut began with a vision. “I put together a board and started it,” Mr. Rothner said. Since that time, “I’ve learned a tremendous amount about how to run an agency.” So much, in fact, that he now mentors younger nonprofits. “I try to help organizations increase their capacity,” he said. “I read a lot and I curate resources. Every agency wants money. I teach them something they can implement, trying to share best practices.”

When he started, he said, “someone said it would be easy. People would flock to us. It’s a nice thought,” but it…

Read More:‘It’s not hard to be kind’