Netflix’s Kaleidoscope took a colorful crew of thieves and gave a fun spin to the typical heist drama, by detailing past motivations as well as chronicling the aftermath. Did the eight-episode series successfully steal your attention?

Following an intro asset titled “Black,” the eight episodes — served by Netflix in a semi-random order — were titled: 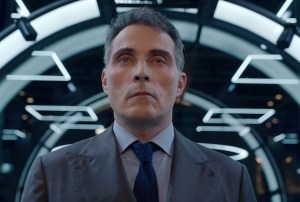 If we go with the easy Ocean’s Eleven comp… Salas was Ray’s Terry Benedict, a man against whom he sought revenge by away of a devastating financial setback. The difference with Kaleidoscope is that we got a whole episode (“Violet”) that established the men’s previous friendship/criminal alliance… followed by the tragic event that forked their paths, when Roger chose to flee the scene of a bungled burglary rather than possibly save Ray’s wife from a fire. (Knowing he’d be arrested soon after, Ray turned a wee Hannah over to Ava, who would find the parent-less lass a new home.)

Back in the present day, “Leo” assembled a crew of thieves both known (Ava, Stan, Judy, Hannah) and new (Bob, RJ), with “love triangle” tensions between Stan, Judy and blowhard Bob often disrupting the team’s flow. Following a diamond district robbery designed to get the crew some fast seed money, Ava drew the attention of Abassi, a disgraced FBI agent with whom she’d crossed paths years prior. Abassi soon threatened to deport Ava’s longtime nanny unless she tipped her off to the crew’s movements.

The episodes “Pink” and “Red,” both set after the heist, offered hints about things that had gone wrong and lives possibly lost, yet stopped short of spelling everything out. “Pink” in particular revealed that immediately after the heist, Judy choked out Bob and left him for dead, after he led her to kill RJ and almost killed Stan. Bob, though, actually survived, albeit without a working voice box. He then struck a deal with an imprisoned Salas and recruited two goofball henchmen to hunt down Leo/Ray, and ideally also Stan. Ray, though, set a trap in which Abassi & Co. cornered and gunned down Bob. As for Ray himself, he was last seen quite afflicted by his Parkinson’s. And after giving new mom Hannah a promised FaceTime call, he was ambling through Central Park when a man came up behind him, pulled out a gun and…. A gunshot rang out, after the screen faded to pink.

Is Ray now dead? Portrayer Giancarlo Esposito told TechRadar, “I want Ray to walk through that tunnel and see Hannah again. I want him to have that final hug. Parkinson’s is a devastating, uncontrollable disease, but you can fight it and Ray has that fight in him again. [Y]ou don’t know if he makes it but, at this point of his journey, he doesn’t want any more loss. He just really wants to live.” 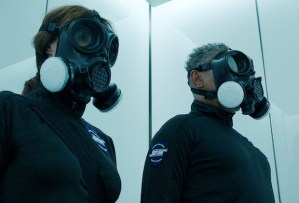 On, and the heist itself? The “White” finale filled in many blanks about how the vault’s umpteen safeguards were bypassed — using a swarm of bees (!) to foil the gait sensor, office plants distributed by Liz to spritz knockout gas, a plastic mask to dupe a facial scan. There was some drama when Judy was slow to plant the explosive that would rush in hurricane rainwater to short out the temperature sensor, and Ava had to blindly detonate it, but Judy made it out fine. Bob and Stan then got to safecracking, while the others loaded the waterproof bins of bonds into a dolly, which Judy sent up in the elevator to RJ.

But along the way, Hannah secretly intercepted the cab and, working with Liz, quickly swapped in bins loaded with colored paper, then sent the dolly up to RJ. It was only after, in “Red,” that the crew realized the bonds were missing.

And as the “White” finale revealed, only Ray ever knew that Hannah had made the switch. She revealed it, and her reasoning, to her father shortly before he dove back down into the flooded vault to plant inside Salas’ personal safe the valuable gem from their bungled, decades-ago heist — to eventually tip off the Feds that he was not who he says he is!