I suppose I should almost feel guilty about my life bobbing along merrily.

People I know have suffered with COVID. Some have died. Many have had their lives and livelihoods disrupted.

I’ve been healthy. My children live in town. I’ve met a marvelous friend. Although colleagues on a computer screen weren’t as much fun, we were still there for each other. And my home basement office did have a window.

Nevertheless, emerging into the sunlight has been wondrous. Seeing people face to face (at least part of their faces) is welcome.

Seeing people face to face (at least part of their faces) is welcome.

But the stress that the last couple of years has had on people remains. Cultural divisiveness increasingly festers. I wouldn’t have thought that a time would come that businesses would feel the need to post signs asking customers to be nice to stressed-out and stretched-thin employees.

Having been at UD for more than half a century, I appreciate it as, for the most part, an oasis of civility. Once, when I was talking to a world-class scholar from my alma mater who was serving as a visiting professor here, he said the two schools were alike. I thought he might be referring to excellence in teaching, scholarship and research. But what he said was, “They are both places where people hold doors open for each other.”

The pandemic has given us time to remember and reflect. I remember something I learned as a young child, well before I encountered it in the theological and philosophical complexities of the likes of Aquinas and Aristotle. I learned that virtues and vices are habits.

Holding a door open once is nice. When it becomes a habit, it becomes part of who we are. Vice works likewise. If we become antagonistic each time we disagree with someone, we lessen who we are. But holding a door open on campus, speaking a kind word to a store clerk or being patient with a restaurant server (and perhaps leaving a little bigger tip) can make us (and the world) better.

If life was going to give me lemons — um, I mean a pandemic — I was going to make lemonade with cocktail umbrellas and a side of zucchini bread.

I added those activities to my life in March 2020, when our routine was upended and our three girls were left disoriented by the sudden close of school. The least I could do was cook them breakfast, something we never could have squeezed into life pre-pandemic with a 7 a.m. bus call.

We went through a lot of scrambled eggs — so many that my husband and I acquiesced in April 2020 and bought six baby chicks for the kids to raise. By the time the hens started laying, the girls were sick of eggs and I had ceased making breakfasts.

In the beginning, every Thursday was art day. At lunch, I’d walk down from my bedroom office and join them on the driveway. We drew. We made tie-dye T-shirts. We splatter painted. I, not being a crafty or artsy person, ran out of ideas before the summer’s end, and Thursdays instead became days for PB&J sandwiches at the kitchen table.

Full disclosure: I also rarely bake, my lemonade comes frozen in a can, and I have never purchased cocktail umbrellas. 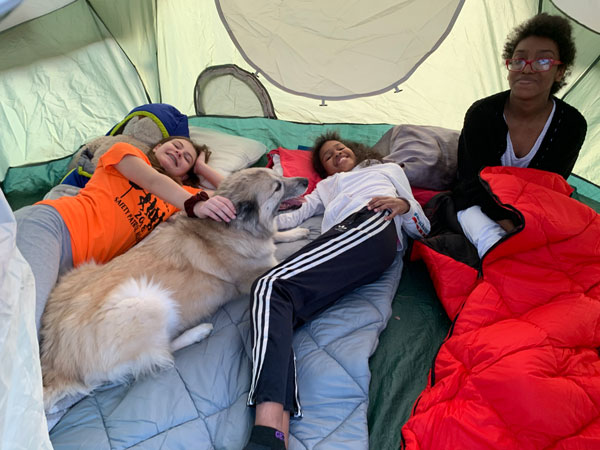 Those goals were good, and I’m glad we started the pandemic with a list of things the whole family could look forward to. The girls needed distraction from the nightly news — which I watched way too much — and the reality that I wasn’t going to allow playdates, sleepovers or mall outings. It helped. It brought us closer together. It allowed us to sleep at night.

In the end, though, those new routines were unsustainable. First off, no one wants that much family time, especially three mostly-teen girls who prefer to entertain one another. Even though I plied them with post-hike ice cream, the kids eventually refused to take another step.

But we were all together. In our bubble, we all stayed physically well, even if our mental health still needed the occasional Oreo Blizzard.

When we are all past this danger and life around the world truly returns to normal, I will still see, when I look out the kitchen window, the fort we built together in the woods. That’s what I hope to remember about our COVID lockdown. The fear, death and loss can take a hike.

I wasn’t yet working for the University of Dayton when the pandemic struck, but instead was employed by the university across town. On our very first day of quarantine, the VP of my division thought it would be fun if every employee took selfies of their home offices and emailed them around.

One colleague shared a photo of her cute home office and her two French bulldogs snoozing on the couch beside her. Her hair was washed and straightened, and her makeup was on.

My boss shared a photo of his setup in his guest bedroom; the bed perfectly made and not a book out of place on the shelf behind him. I think he was even wearing a collared shirt.

Then there was my photo: 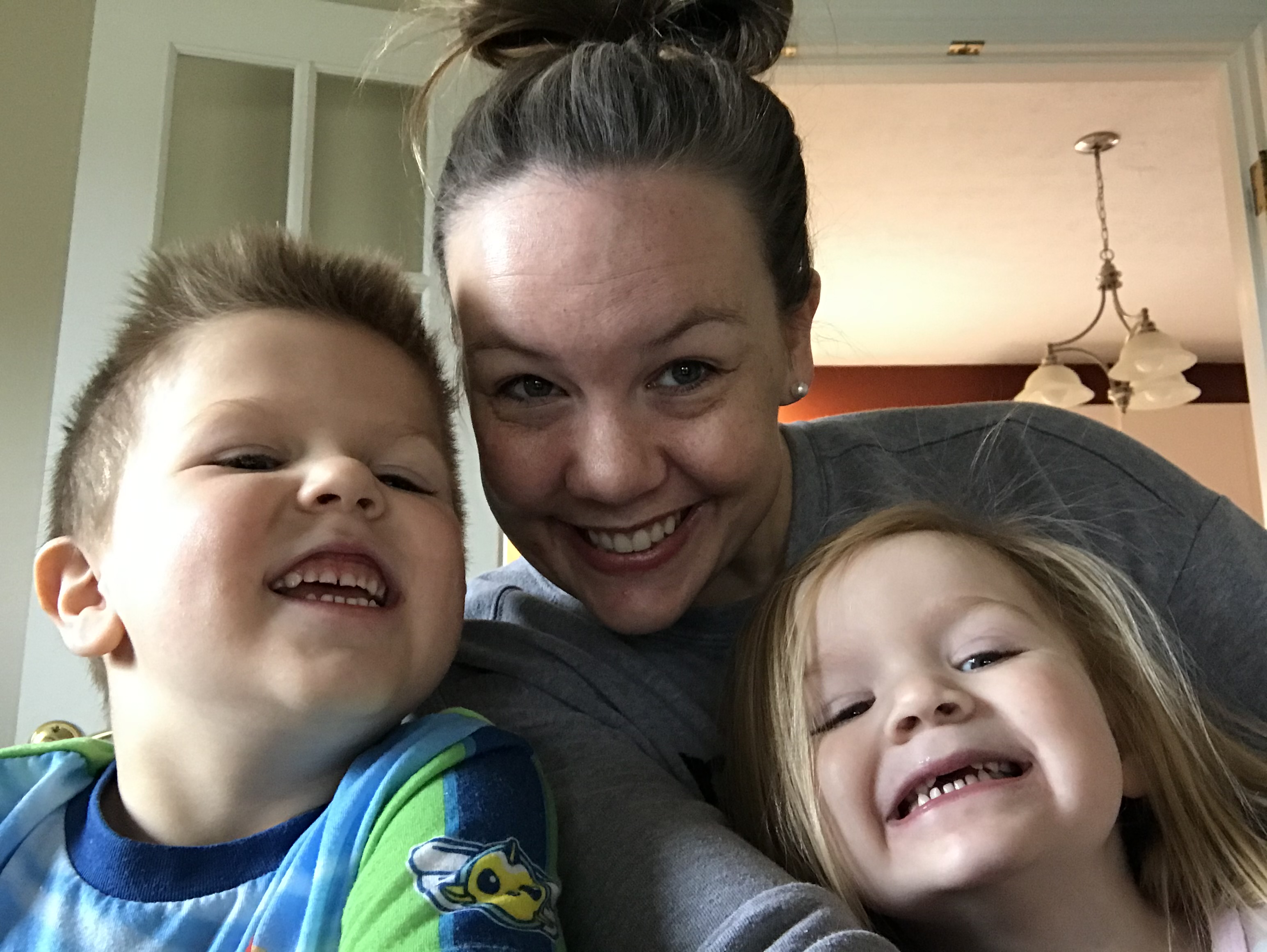 I’d been up since 6 a.m. I hadn’t showered. My hair was stacked on top of my head in a messy bun. I still had on my pajamas, as did my two kids — Cooper, 4, and Margot, 2. I don’t even think I had washed my face. Under my eyes I had bags the size of Texas, weary from sleep deprivation after endless nights spent awake worrying about the virus. It was my new COVID look and I rocked it.

It was very clear early on that I was in an entirely different situation than most of my coworkers. This was only the beginning.

A week before Ohio’s stay-at-home order was issued, my husband was labeled an essential worker on his program at Wright-Patterson Air Force Base, and was still going into the office each day. I was home alone with two small kids and a full-time job. To say I was losing my mind is an understatement.

I love my kids, but they are a lot to handle, even when they are normally in daycare five days a week. For two little ones each with the energy of a Labrador retriever to be stuck inside with near freezing temperatures outside for the first several weeks of quarantine was a recipe for disaster.

Pre-pandemic, my kids’ iPad time was limited to 30 minutes per day, but after one week, I didn’t care if their brains were fried, I just wanted silence. The top of every hour was greeted with the question, “Mommy, can I have a snack?” Whoever invented applesauce pouches should be knighted. Playing with slime became a regular afternoon activity, until it took the finish off my antique dining table — never again.

I remember after three days in, I wrote an appreciative Facebook post and tagged all of my kids’ daycare teachers. They are saints on Earth to deal with 10-15 toddlers at one time. Each one of them needs a raise.

Over the next several weeks, our Zoom calls included my coworkers’ tales…

Read More:Perspectives on the pandemic