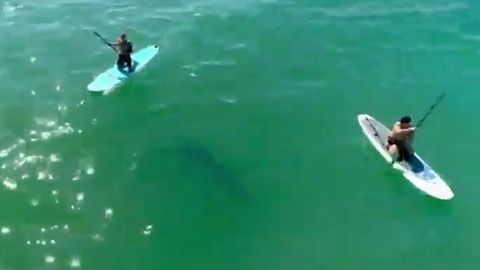 In his years of playing Will Turner in the Pirates of the Caribbean franchise, Orlando Bloom has faced his fair share of on-screen danger. From undead pirates to being held prisoner on the Flying Dutchman, and having his heart cut out, Will Turner has faced it all and then some. However, Bloom does not just play a brave buccaneer in movies, he is one brave guy in real life.

Bloom recently shared a video of himself paddleboarding in, what seems like, the middle of nowhere. However, he is not the only thing in the water. Underneath his paddleboard is a large shadow, which, Bloom informed his followers, was actually a Great White shark. What’s more, he knew it was there and paddle boarded with a shark on purpose!

When fear becomes your friend and @themalibuartist captures the moment. 🦈🦈🦈😳

A number of followers commended his bravery and commented that paddleboarding with sharks is something they would never do. However, Bloom’s partner, superstar Katy Perry, whom he became engaged to in 2019, didn’t seem as freaked out as everyone else. She even commented:

next time go out and put some peanut butter on babe

Bloom is quite active on social media and often shows his followers the fun activities he likes to engage in, including hiking, snowboarding, archery, and now, paddleboarding with Great White sharks.

Would you ever paddleboard with Great White Sharks? What’s the most adventurous thing you’ve ever done? Let us know in the comments!

Read More:‘Pirates of the Caribbean’ Star Just Paddle Boarded With Sharks! – Inside the Magic