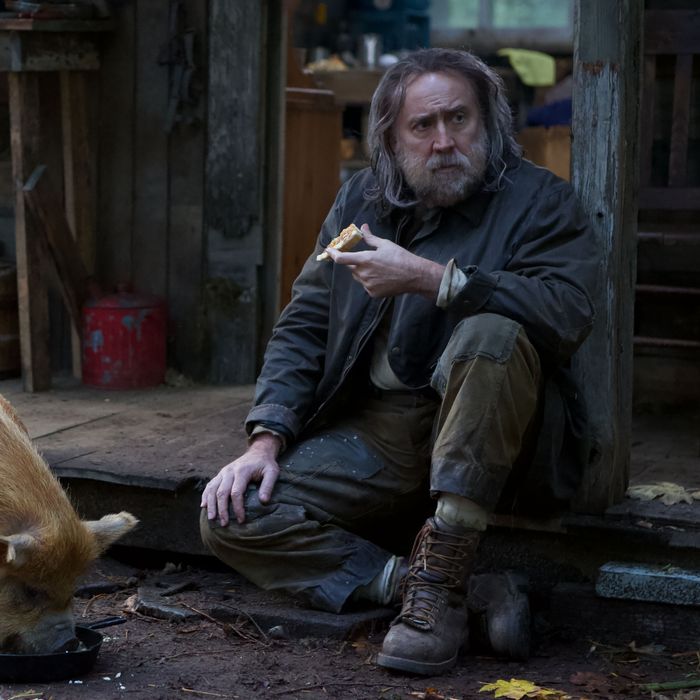 More Zen fable than genre picture, Michael Sarnoski’s Pig delights in defying expectations. After its opening 20 or so minutes, you could easily mistake it for a revenge movie, or at least some kind of hillbilly-noir quest narrative. But those expecting a sillier variation on John Wick or Taken or even previous idiosyncratic Nicolas Cage outings like Mandy may be in for some disappointment. Pig (now in theaters via Neon Releasing) is in no way that kind of movie. As it proceeds, it expands its vision and compassion, even as it de-escalates the tension. It’s not about the thing it’s about, except that it ultimately is totally about the thing it’s about.

Okay, let me explain what I mean. Nicolas Cage plays a grizzled, mournful hermit named Rob who lives in the woods of the Pacific Northwest and spends his days hunting truffles with his pig, Apple, and then trading them to big-city buyer Amir (Alex Wolff). One night, a couple of intruders beat Rob up and steal Apple. Truffles are big business in the growing high-end Portland restaurant scene, and a well-trained truffle pig is obviously very valuable. The distraught, vengeful Rob calls up Amir, and the two head into the city on a journey that takes them to posh restaurants and underground fight clubs in their efforts to locate Apple.

That sounds like a goofy idea for a story, but as played out onscreen, it’s even goofier. Leaving aside the slightly surreal notion that all this hullaballoo is happening over a truffle pig, Sarnoski drops a number of visual hints as to the metaphorical nature of this quest. For starters, the grizzled, grimy Rob is increasingly wounded and covered in blood as the evening proceeds. He doesn’t even wash the blood off his face after he’s pummeled in a late-night beatdown, and he’s already covered in scars from the initial, quite violent theft of his pig. And Cage — still one of our bravest actors — plays Rob with a ghostly rigidity that regularly slips from coiled aggression to stone-faced deadpan. He feels true, but he doesn’t feel real.

As the duo travel through the city, Amir discovers that Rob’s full name — Robin Feld — can still open lots of doors. He was, 15 years earlier, Portland’s most respected, beloved chef. We also find out — gradually, in dribs and drabs — what made Robin turn away from his profession. But Amir also has a backstory, one that increasingly connects with Robin’s. Back when he was a kid, his parents had a memorable dinner at Robin’s restaurant, and he recalls that it was the only time they didn’t come back from their date night fighting. The power of food to heal, to release emotions long suppressed, runs throughout Pig. But that has little to do with food and more to do with connection, a sense of being present and alive that food in its purest form represents.

Most movies that try to explore characters’ backstories would go out of their way to give us heavy details about the past — either via flashbacks or long, anguished dialogue scenes. Pig treads lightly, letting us absorb information through tossed-off lines and moments of silence. Sarnoski is often content to focus his camera on a small detail or glance, or to cut away right in the middle of a dramatic moment, as if trying to represent cinematically the mindfulness that Robin seeks, and that maybe he lost with the theft of his pig.

Pig’s funniest, most powerful moment comes when Robin and Amir visit the city’s hottest restaurant, a kind of super-fancy locavore haute-cuisine outlet where the ornate, minuscule dishes come with a poetic lecture about the Earth that takes longer than it would to eat the actual food. Calling the chef (David Knell), a former employee of his, to the table, Robin tells him that everything around them is meaningless: “The critics aren’t real, the customers aren’t real, because this isn’t real. You aren’t real. Why do you care about these people? … They don’t even know you, because you haven’t shown them. Every day you wake up and there’ll be less of you.” Cage’s haunted delivery, contrasting powerfully with Knell’s anxious, terrified giggling, gives the scene a metaphysical kick. His speech starts off feeling like a stinging humiliation of a stuck-up foodie chef, until we gradually realize that Robin is talking about himself. “We don’t get a lot of things to really care about,” he finally sighs. “Derek, who has my pig?”

That pig is the only thing that matters to Robin, because it’s the only thing he’s got left that he cares about, and once the pig is gone, he too may be gone. Each step that brings Robin and Amir closer to Apple seems to bring them closer to their own past. These scenes also play out like individual stations in a series of abasement rituals, in which Robin is beaten both physically and spiritually — as if, after years of hiding in the woods, he’s finally coming face-to-face with his own mortality and meaninglessness, his own impermanence. During an earlier monologue, Robin talks about the great earthquake that will one day level the Pacific Northwest, and at times his words sound not like a prophecy or a warning, but an oblique recollection of the emotional earthquake that devastated him. There’s one more fold to that, however — something more cosmic that reflects on the nature of life itself. Every day we wake up, there’s less of us, too. We all lose the things we care about, until we also are finally gone.

Read More:See Pig and Tremble Before Your Own Mortality