The following contains spoilers from the Sept. 8 episode of Disney+’s She-Hulk: Attorney at Law.

Titania took a big swing at She-Hulk this Thursday, and it arrived in the form of an 11×14 legal document — a lawsuit filed to claim misuse of the “She-Hulk” name, which apparently Mary MacPherran (the superpowered influencer’s real name) had trademarked.

How will Jen Walters and her paralegal/BFF Nikki Ramos respond to this litigious threat? TVLine invited Ginger Gonzaga, who plays Nikki, to tease what’s ahead….

It’s funny, it’s definitely been an adjustment, but I will say that I’ve been 5′ 3″ all my life, so I’m not that unfamiliar with people who are taller than me. But yeah, getting used to the technology is this whole other learning curve. When I watch it now, it’s so funny to me and I love it. I love seeing Nikki have to scurry after someone. I love when dynamic duos have someone who is small and scrappy, and in this situation I am normal-sized and she is just an elevated height.

TVLINE | What was the trick to maintaining the correct eyeline when Tatiana is She-Hulk?
Oh my goodness, I keep joking that if I don’t look at the eyeline and I look at Tatiana’s face, that means that in post-production Nikki is just constantly staring at She-Hulk’s boobs. Now, I’m not mad at She-Hulk’s boobs, but we can’t do that.

But it’s hard, you have to get used to it. Sometimes you have to force yourself to commit. The thing that helped me was Tatiana’s physicality. I want to rely on being able to look at her face, though I can’t do that all the time, so she at least always gives me some shoulder movement where in my peripheral vision I know, “OK, she’s She-Hulk.” But we do it with these other monsters, too! I joke every once in a while, “And don’t forget, the green dot on a stick is Abomination!” 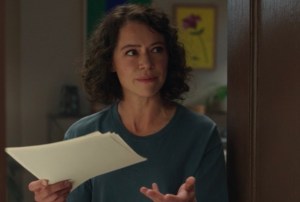 TVLINE | Episode 4 ended with superpowered influencer Titania filing a lawsuit against Jen for using the She-Hulk name. Is there some juicy legal action ahead?
Yes, that hot legal action with pens and highlighters that you’ve all been asking for! [Laughs] The show is now definitely switching into what it looks like when you have petty, idiot supervillains and superheroes who are either antagonizing you or need to be represented by you. The thing about working in a superhuman law division is we can represent anyone, so we get comic book characters that haven’t entered the Marvel Universe yet, that you haven’t seen in any of the trailers. And you get to see the idiocy of the ridiculously fun superheroes who have legal trouble and may or may not listen to their attorneys. I’m really excited for people to see these guest stars that are in the comic books. 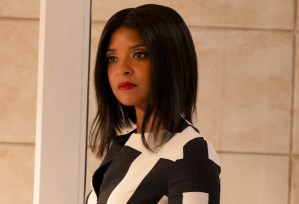 TVLINE | There was a passing allusion to Nikki being a part of the LGBTQ community. Will this season find any time to dig into that?
I wish that we got to more. Nikki is definitely queer, she’s free, she’ll love anyone. i thought of her initially as being bi, because I’m kind of projecting myself onto this character. But in truth I think Nikki will love anyone — and she can hang with anyone, which is fun. She can hang with villains, and she can all of a sudden convince them to get on her side. She can charm herself out of any situation. There are no rules for Nikki, which is a nice balance with Jen Walters.

I wish we got to see her dating more, but I will say she has a bit of a secret crush on Mallory (played by Renée Elise Goldsberry), which we’ll see. Nikki doesn’t have any problems dating, so were trying to focus on what needs to happen, which is getting Jen to love herself in both forms and finally go on some decent dates — without getting monkeypox, I hope!

Want scoop on She-Hulk, or for any other show? Email InsideLine@tvline.com and your question may be answered via Matt’s Inside Line.

A letter from my body

How Long Does Fluid Retention Last in Anorexia Recovery