LA-based, globally known drag queen Sherry Vine is always on the move, and often on the make, except when an entire country orders her to stand down. It’s happened twice now.

“I had a few months of eating whatever I wanted, drinking plenty of wine, and binge watching TV,” she recalled, of life in the early days of COVID-19 lockdown.

By June of 2020, Vine took stock of her new routine and decided, “to create a silver lining and really focus on health and exercise, instead of just watching TV. I actually am in better shape and sleeping better than I have been, ever. I also managed to read more books in a year than probably the last two decades. Instead of always texting, I would call people. Another silver lining was reconnecting with Coco Peru. We talk every other day and just laugh and laugh.”

That was back in July, when Vine was anticipating an August East Coast tour that would see her play sold-out shows at Blue Moon (Rehoboth Beach) and at two new venues in Washington, D.C. and New York City (Crazy Aunt Helen’s and Coby Club, respectively).

A second show was added to her time at Hudson, New York’s Poured Candle Bar, but a prior obligation forced her to cancel August shows at Provincetown’s Red Room. 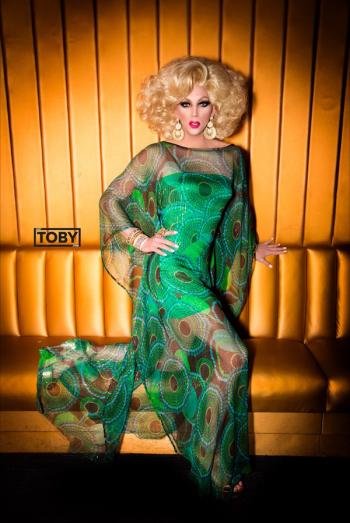 “I felt terrible,” said Vine, of the tour’s abrupt end, “but it was the only way I could go.”

And go she did, penning a recent email to the Bay Area Reporter.

“I’m in Tel Aviv now opening for Bianca del Rio’s two shows,” she wrote. “We had to quarantine for a week; all tourists do. At first we were working on projects and then it got a little frustrating. We are in a hotel on the beach but can’t leave the room! But as I write this, it’s our last day and then we are free to sample the food, beach, culture, and men!”

Flash forward one more week and, assuming the steam Sherry blew off on that Israeli beach didn’t mushroom into an open-ended stint in an Israeli prison, Sherry will bring her current solo show to Oasis on September 9. An inspiring example of truth in advertising, Sherry notes the audience for I Love Being a Whore will see a few classic pop song parodies culled from bulging back catalog, which numbers in the hundreds. (“Gloria,” for example, becomes “Glory Hole.”)

Asked how the booking came about, Sherry notes she’s no newbie to Oasis, having performed there “since they first opened. I have a long history with D’Arcy Drollinger and former co-owner, Heklina. I’ve done numerous solo shows, Battle of The Bitches with Jackie Beat, and as a guest for events. What I most appreciate about Oasis is that it was designed and opened by queens! There’s a great stage with curtains, etc., and a proper theatrical dressing room. This is a treat! I performed at Heklina’s T-Shack many, many times. I think I was one of the first imported queens to perform there—a century ago. And I’ve known D’Arcy for over 20 years. San Fran is always a great crowd and they love the filth.”

Sherry’s show queens
Those who can’t make it to the show, or will be there with bells on only to hunger for more, can dine out on Vine and some of contemporary drag’s biggest names by binging Season I of The Sherry Vine Variety Show again and again. Now available on OUTtv and other platforms, the six episodes were shot in just eight days in late October 2020, under COVID restrictions that limited cast and crew to 10 people at any given time.

That’s no accident, said Sherry, noting, “Carol is my #1 inspiration, always! We definitely felt the spirit of The Carol Burnett Show on the set. I wish we had more time to cut up and make each other laugh more, like they did. I mean, we had fun. It wasn’t tense at all, but we didn’t have time for multiple takes, so everyone stuck to the script. More bloopers for Season 2!”

Asked about the possibility of more to come, Sherry said she hopes for a decision by the end of the year, and is “already writing just in case.” For Season I, Sherry spent the summer of 2020 writing the scripts, working on the songs, casting the show, and making a budget.

But the greatest gift of The Sherry Vine Variety Show is how closely it adheres to her stage act, with a tone and language that audiences weaned on RuPaul’s Drag Race might find, to be frank, frankly shocking. For those who’ve ever wondered how many words rhyme with ‘dick’ or ‘cock,’ your long search is over.

“Well, I will never have a show in NBC,” said Sherry, “I’m not interested in being ‘family-friendly’ at all. OUTtv never once censored me or even asked what I was doing. I would ask Jacob [Slane (PEG)], ‘Can we do this?’ and he always replied, ‘Do whatever you want.’ When we decided, kinda last minute, to do original lyrics and not pop parodies, I still stayed true to my demented mind. I called my friend, Joel Waggoner. ‘Can you compose a love ballad to the lyrics ‘I Wanna Suck You Now?” She’s sick.”