Shonda Rhimes has launched TV superstars before — such as the entire cast of “Grey’s Anatomy,” led by Ellen Pompeo. But even she was caught off guard by the uproar earlier this year when Netflix and her company Shondaland announced that Regé-Jean Page, everyone’s favorite duke, was leaving “Bridgerton” behind, and wouldn’t be appearing in the show’s second season.

“What I loved was we were going to create this powerful, exciting, amazing romance,” Rhimes says of the relationship between Simon Basset, the Duke of Hastings (Page) and Daphne Bridgerton (Phoebe Dynevor). “And then for once in television, they were going to get to have their happily ever after versus — well, you know! In network television, you have to come up with 15 years of why a couple has to be apart.” 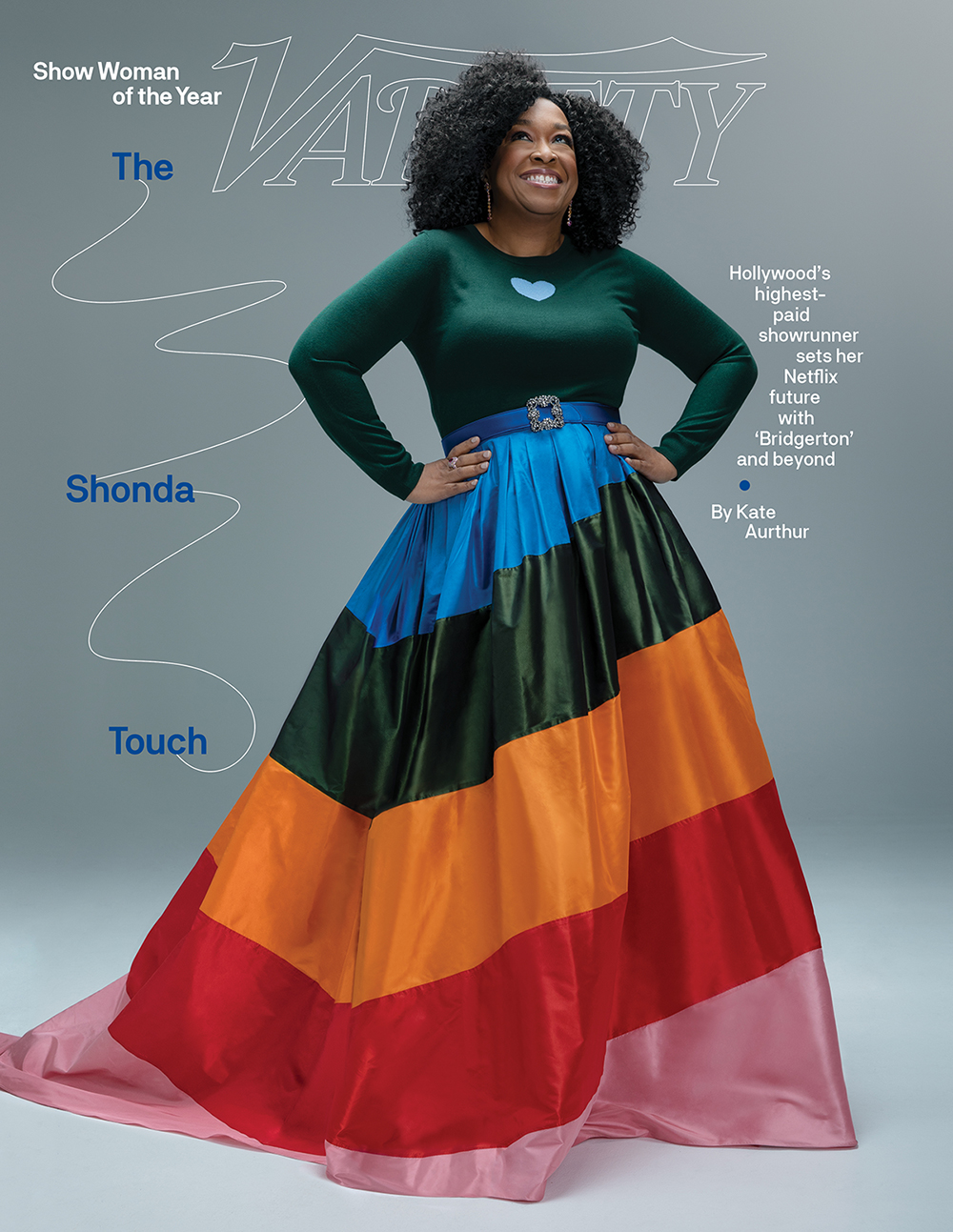 Upon learning of Page’s departure, the internet erupted in mourning. “I don’t think I expected everybody to have such a reaction to it,” Rhimes says. “My assumption of what people knew of romance novels was … I overestimated a great deal.”

But she gets it. “People’s attachment to couples is real — I mean, I know that better than anybody,” Rhimes says. “And I think that means success. But I do understand their despair.”

Then again, maybe Rhimes, 51, shouldn’t have been surprised at all. “Bridgerton,” her long-awaited series debut for Netflix, exploded onto the streamer on Christmas Day 2020, and became a worldwide phenomenon — a cozy, carnal holiday binge. Ted Sarandos, Netflix’s co-CEO, revealed this fall that the Regency-period romance had topped Netflix’s charts as its most-watched original series of all time (before “Squid Game” came along), in both households and in time spent viewing.

Netflix head of global TV Bela Bajaria tells Variety that the streamer’s deal with Shondaland is successful based on what it calls the “‘Bridgerton’-verse” alone. “With ‘Bridgerton,’ 82 million member households around the world watched it in the first 28 days,” Bajaria says. “It didn’t have to be the biggest — but it’s amazing that it was.”

Rhimes has made a home for herself at Netflix, having succeeded there where some of her high-powered peers have flailed. With a newly renewed four-year deal, in which she’ll make $150 million with a bonus that could be worth an additional $200 million, she is the highest-paid showrunner on television, and she’s one of the most influential creators ever to work in the medium. “Inventing Anna,” her limited series about the grifter Anna Delvey, and the first show she herself has written for the streamer, will premiere in February, Variety can reveal exclusively. And “Bridgerton” will return for Season 2 in 2022. These are among the many reasons Rhimes has been selected as Variety’s Show Woman of the Year.

When asked what she sees as her next frontier, Rhimes casually mentions that she’s learning to play the cello. The cello?

“It’s a whole long Yo-Yo Ma story,” Rhimes says with a smile, “and I’m not going to tell it.” The point is, she says, she’s trying something different.

“I’m building the company,” she says, sounding instructive and clear, like one of her fictional creations — perhaps Olivia Pope from “Scandal” or Cristina Yang of “Grey’s Anatomy.” “Netflix has been a really happy place for me. Creatively, I feel very fulfilled in a way that I haven’t felt fulfilled in a long time.”

In August 2017, when the announcement was imminent that Rhimes was leaving ABC for a $100 million deal at Netflix, she left town. Rhimes knew “that it was going to be a thing,” and she had no desire to experience the aftershocks. By bringing Rhimes to the streamer, Netflix was signaling — no, hollering — to Hollywood that the company was no longer a mere licenser: It intended to produce its own content, and distribute it throughout the world.

And who better to kick off this new arms race for talent? Rhimes had created “Grey’s Anatomy,” which premiered on ABC in 2005, and has been licensed to more than 200 territories internationally and translated into more than 60 languages. That show alone — which began its 18th season this fall — has been a multibillion-dollar global business for ABC Studios, all having sprung from Rhimes’ imagination. “Grey’s Anatomy” has also been a tremendously popular title on Netflix: Sarandos has said the medical drama has drawn more viewing hours than any other licensed show on the streamer. Rhimes is prolific too. As of 2014, and for several seasons after, ABC’s Thursday lineup, the most valuable night of the week to advertisers, was branded as #TGIT (“Thank God It’s Thursday”), and consisted of Shondaland shows such as “Grey’s,” “Scandal” and “How to Get Away With Murder.”

“It sounds arrogant to say it, but to me it makes me sad to have to say it,” she says. “We changed the faces that you see on television.”

Rhimes’ inclusive impulses weren’t merely reflected on-screen. More than a decade before the #MeToo resurgence drew attention to the stark inequities at every level of the entertainment business, Shondaland productions gave behind-the-scenes opportunities to those from underrepresented groups — especially women directors and directors of color.

Rhimes has always been a visionary. “I’m never going to be satisfied with anything,” she says. “Because frankly, if I was satisfied with something, I should probably retire.” And her farsighted concept for popular entertainment — coupled with how the industry should produce that entertainment — is an ethos the rest of Hollywood is still catching up to today.

In an interview, Rhimes’ longtime producing partner, Betsy Beers, speaks of the “stress” of that period. “We’re both perfectionists, so there’s that,” she says. “But when it’s a new deal and when there are a lot of eyeballs on your new deal, I think there is an added pressure to produce. It takes a while, and you just hope that going out of the gate, you do something which is worth the wait.” 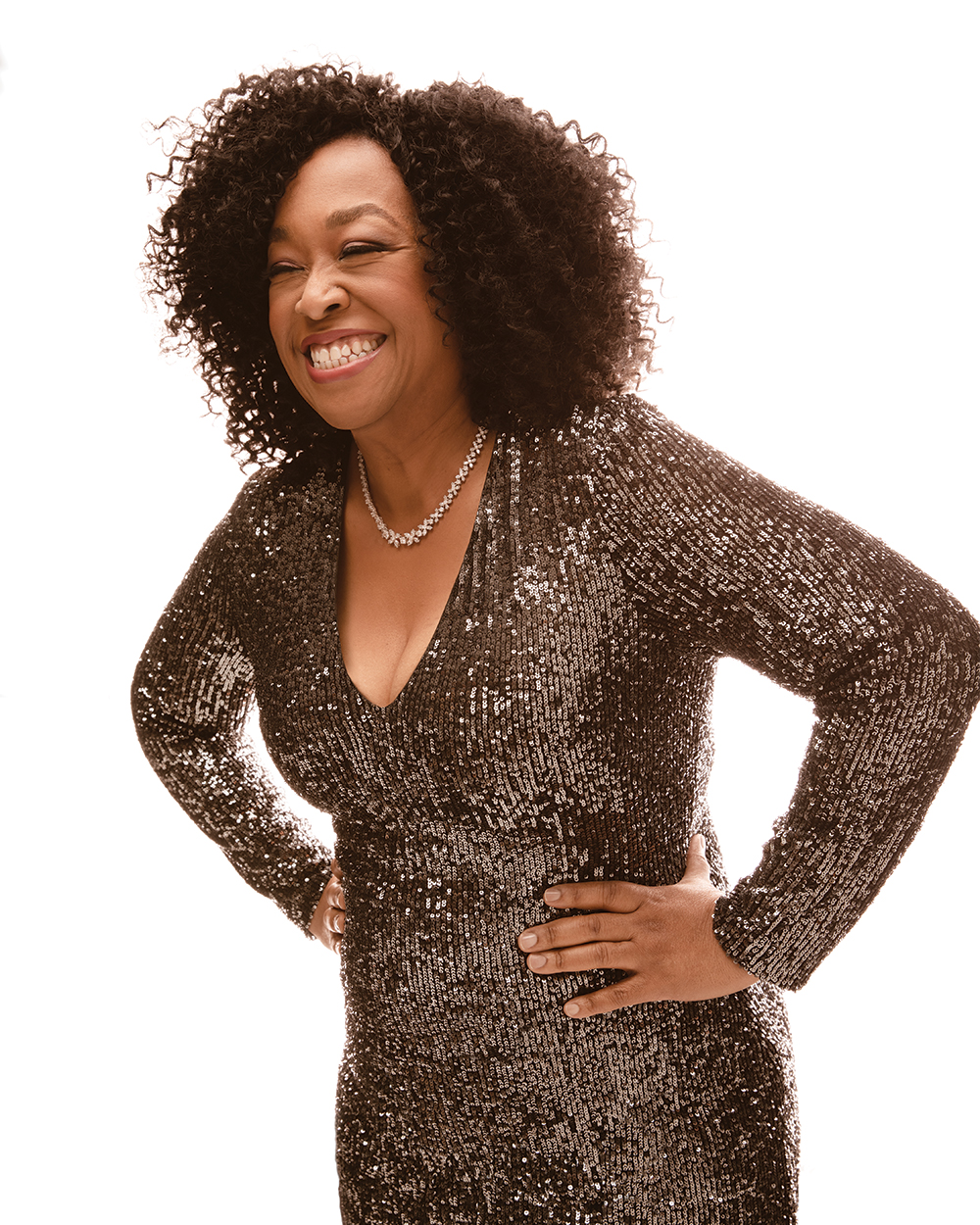 Beers pauses, and then says with a laugh: “So it was wonderful that ‘Bridgerton’ was the first one out of the gate.”

For Beers, who has certainly experienced success on a grand scale with “Grey’s Anatomy” and “Scandal,” Netflix’s global reach made the “Bridgerton” debut feel different. “I’ve never had a show launch internationally at the same minute in my life,” she says.

And the triumph of “Bridgerton” made renewing Rhimes’ deal this year “a very natural, organic thing,” according to Netflix’s Bajaria.

“It pierced culture globally — there was just so much conversation around it,” Bajaria says. “We make deals with writers in an exclusive relationship to build that relationship and trust, and hope that they get to do amazing work here.”

And, she adds, “I was never worried about her productivity.”

Netflix’s new deal with Shondaland, announced in July, has even expanded the relationship to include movies, gaming and virtual reality content. Rhimes has no solid plans for the…