A wrap of winners at the recent Emmy Awards… 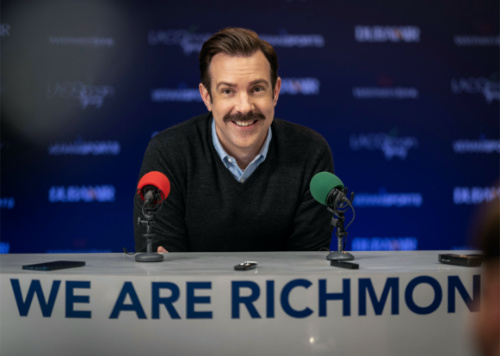 Ted Lasso
In A Word: Heartwarming
What it Won: Seven Emmys including ‘Outstanding Comedy Series’
Where to watch: Apple TV+
What it is: Jason Sudeikis stars as Ted Lasso, a bumbling American football coach who his hired to lead the English soccer team, Richmond. Little does he know he is being set up for failure by vengeful club owner, Rebecca Welton, who seeks to destroy the soccer team to spite her ex-husband. Lasso is a fish-out-of-water as his culture, poor soccer skills, and optimism clash sharply with the players, the fans and his boss. This charming series is a breath of fresh air in a television landscape dominated by gritty, dark content. Lasso’s persistent optimism, goodwill and belief in the best of human nature ultimately wins over all his opponents, whether it be the foul-mouthed football stars or his scheming bosses. The series does have a language warning almost exclusively for Emmy winner Brett Goldstein’s portrayal of Roy Kent, the veteran football star who swears profusely. Ted Lasso has a script loaded with witty one-liners and hilarious situations, but its true power lies in creating genuinely heartwarming moments with it likable ensemble of quirky characters.

The Queen’s Gambit
In A Word: Empowering
What it won: 11 Emmys including ‘Outstanding Limited Series’
Where to watch: Netflix
What it is: Orphan Elizabeth Harmon rises to international fame as a female chess prodigy in the 1950’s-60’s. The juxtaposition of placing a smart, determined, brilliant woman in a time period and culture that is completely dominated by men makes a powerful statement of social commentary. Harmon not only has to overcome the establishment, but also a battle with substance abuse, emotional issues and the ability to trust others. The series has become a cultural phenomenon that has launched a renaissance of chess playing in this generation. 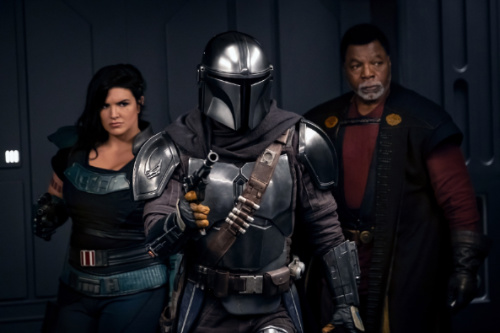 The Mandalorian
In A Word: Spectacular
What it Won: Seven Emmys including ‘Outstanding Visual Effects and Stunts’
Where to watch: Disney+
What it is: The Mandalorian is the ultimate fan service for lovers of Star Wars. Featuring a huge roster of characters, locations and starships, this series feels like a toy box of fan favourites mashed into an action series. After the disappointment of the latest Star Wars movies, The Mandalorian delivers big screen action and an authentic Star Wars universe onto the small screen. The simple set up of the show is that the Mandalorian is a lone gunslinger protecting the seemingly defenceless “Baby Yoda” from bounty hunters, Imperial operatives and monstrous beasts. The Mandalorian is a sci-fi reinterpretation of classic westerns of old. The formula works by combining the extraordinarily cute “Baby Yoda” with the hardened Mandalorian fighter as they visit strange places and encounter classic characters from throughout the Star Wars deep lore. The series pioneers new “live” special effects processes that can create fantastic environments in real time on the set. This technical achievement promises to usher in a new age of television that will push the boundaries of visual spectacle.

The Crown
In a Word: Revealing
What it won: 11 Emmys including ‘Outstanding Drama Series’
Where to watch: Netflix
What it is: An inside look into the Royal family that begins with Queen Elizabeth’s inauguration in the 1950’s and season four reaches the 1980s where Prince Charles and Princess Diana dominated the headlines. This ambitious series covers the interpersonal drama of the royal family as it intersects with national and global events throughout history. The latest season introduces Gillian Anderson as Margaret Thatcher opposite Elizabeth Colman’s Queen Elizabeth, both winning ‘Outstanding Actress’ awards for their vastly contrasting performances. This compelling series reveals the sordid affairs and scandals that have plagued the royal family over the years, yet it remains surprisingly insightful as it examines the psychological forces that drive the characters. Insecurities, jealousies, favoritism, fame, pride and faith are the powers that shape their lives and they are all explored skillfully shedding light on the human condition. At its heart, the series revolves around the premise: what must be sacrificed in order to protect the all important Crown? Tragically, it seems that the answer is everything.

WandaVision
In A Word: Interwoven
What it Won: Three Emmys (Production design, Costumes and Music and Lyrics)
Where to Watch: Disney+
What it is: The first of Disney’s big budget Marvel TV shows, WandaVision seamlessly integrates the characters and plots from the blockbuster film franchise into the TV format. The episodic structure allows a deeper dive into the psyche of loss and grief following the events of The Avengers movies. Considered one of the biggest snubs of the 2021 Emmys, having being nominated for 23 awards and only winning three minor categories, it is still notable for earning Marvel its first Emmy recognition for the bold new direction they are taking the franchise. WandaVision probably deserved more for its fierce creativity, stunning special effects and deeply emotional performances by Elizabeth Olsen’s Wanda and Paul Bettany’s Vision. The slow build of the first few episodes leads to some stunning twists and a magical, climatic finale.

Mare of Easttown
In a Word: Raw
What it Won: Four Emmys including three ‘Outstanding Actor/Actress’ awards
Where to Watch: HBO Max (USA), Binge (Australia)
What it is: Easttown detective Mare, played superbly by Kate Winslet, investigates the murder of a pregnant teenager, Erin. As Mare follows the string of leads, she discovers the deepest secrets of friends and family in this small town. Mare must juggle the murder investigation with her own personal drama that involves dealing with a custody battle for her grandchild, conflict with her ex-husband and accusations of incompetency by a grieving friend. There is no doubt the themes are depressing in this gritty, twisty crime drama as it peers into the dark side of human nature in suburban America. Ultimately, the series is held up by a career redefining performance by Winslet who embraces her age, her body image and a remarkably authentic accent to delivery a powerhouse performance.

Read More:Sight Magazine – On the Screen Special: Best of the Emmy winners