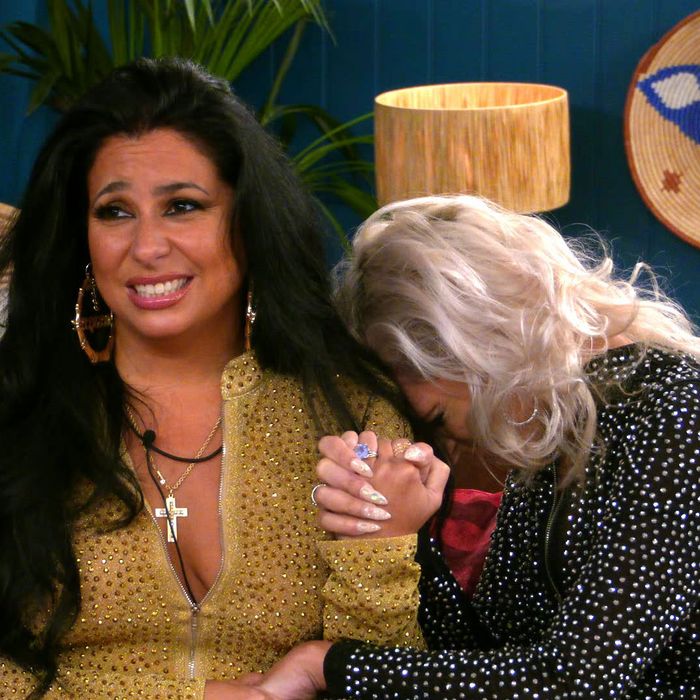 Netflix’s social-media-inspired reality show The Circle is back with its third season today, just four months after crowning DeLeesa St. Agathe, a.k.a. Trevor, the victor of season two. With four episodes released in a week, The Circle invites a binge, and this season, we’ll be delivering weekly power rankings as the wannabe-influencers determine who’s deserving of that $100,000 payday.

Before we jump into the rankings, let’s do a quick recap. Meant to be a simple way to get to know one another, the first game this season asks the eight players a series of icebreaker questions. Most offensively to some, 52-year-old Michelle reveals that she refuses to let her dogs kiss her mouth — but can you blame her? The drama instantly starts bubbling, and before anyone’s really had a chance to get to know one another, the Circle demands its first sacrifice. The players rate each other, awarding southern-belle Kai the top spot and making her the Circle’s first sole influencer of the season. Forced to make a quick decision and convinced that she’s exposing a catfish, Kai blocks Ava, sending the singer-songwriter — and her sister, Chanel, who is playing with her — out of the game.

But obviously, things can’t be that simple; after all, this is The Circle. In a shocking series first, Ava and Chanel are given a second chance in the game — by cloning a player and stealing their identity. Michelle is similarly low in the first ratings, so the sisters choose to clone the Mama Bear, and for 24 hours, there are two Michelles in the Circle Chat, enraging and confusing the Real Michelle (now known as “Orange Michelle”). Unfortunately, after being unable to convince the other players she’s real, all six other players unanimously block her. Because she needs to know who just ruined her game, Michelle visits Ava and Chanel, and the conversation between the three women is tense and hard to watch. Ultimately, Real Michelle is a good sport (if someone pulled that stunt on me and cost me $100,000, I don’t think a cussing emoji would have been the harshest words I shared with my imposter). After Michelle is blocked, Ava and Chanel officially earn the right to stay in the game. Now, instead of playing as the 25-year-old singer Ava, we’ll see them attempt to embody Michelle’s southern charm.

Before the second rating, two new catfish are introduced to the game: Sophia, a.k.a. Isabella, and Rachel, a.k.a. Jackson. It’s always an uphill battle for the latecomers in The Circle, but Isabella and Jackson instantly shimmy their way into the game by picking two players each to join them for a Flashback Party. Although they can’t be rated, they have the opportunity to rate the other players. At the end of episode four, the rating has Ruksana in first place, Kai in second, Nick third, Daniel fourth, Ashley and Calvin tied for fifth, and Michelle last, again. For the second time, Kai is an influencer, this time joined by Ruksana.

While we wait patiently for next week’s batch of episodes to see who Ruksana and Kai decide to block, here’s our first power ranking for season three of The Circle.

Four episodes in, Ruksana has already formed a bond with almost everyone in the Circle, earning her the top spot in this week’s rankings. Her bubbly personality and genuine positivity are drawing in the other players, and I’ve been rooting for her since the first time she appeared onscreen. It’s always lovely when The Circle rewards good behavior. Ruksana has certainly played a strong game so far, even successfully using the opportunity to be excluded from the Flashback Party to bond with Daniel and Calvin. She ranked first place in episode four’s ratings, giving her the chance to block a player along with Kai, who pulled off becoming an influencer in both ratings. We may have to wait to see who the influencers blocked, but I couldn’t be happier to see Ruksana wield some power.

So far, Kai is two for two, earning that coveted blue check mark twice in the first two ratings. Flirting with Calvin and Jackson, cultivating a friendship with Ruksana, and trying to suss out if Michelle’s motherly intentions are true have been Kai’s most significant moves. She solidified her trust with Ruksana by agreeing to break the news about whom they had blocked to the other players, keeping blood off her ally’s hands. On the surface, Kai seems to have a good relationship with nearly everyone, but a harsh anonymous review left her worried that people might be seeing through that big smile. Although her catfish radar was a little off when she gave Ava the boot, we’ll see if she can figure out the sisters’ newest ruse. Will she make the right choice in the next block?

Although she’s one of two latecomers and couldn’t be officially ranked without an asterisk, I’m here to show some love to Isabella — well, Sophia. An adorable gay woman who strongly believes that being stereotypically beautiful makes social media easier, Sophia is taking on the role of her older sister, blonde-bombshell Isabella, and will shamelessly flirt with any man who stands in her way to $100,000. Sophia is an endearing character from the moment she’s introduced. She says she hates the drama but really loves it — the perfect combination for The Circle. “I am straight. I am straight,” she tries to convince herself while working up the courage to flirt with Nick. Been there, girl!

Daniel is such a sweetheart; I can see him becoming a player everyone eventually wants to align with. Self-deprecating and witty, he makes everyone laugh but still lets the truth come out easily. He confided in Calvin and Ruksana that he hasn’t had his first kiss yet and was open about his attraction to newbie Jackson. After his feelings were hurt in the anonymous review challenge, I loved that he felt safe enough to confide in Ruksana about being homesick.

Matthew came into this game with a promise to his BFF and soul mate Ashley: He would NOT flirt with guys and would play authentically as Ashley, a lesbian outside of the Circle. It didn’t take long for Matthew to rework that story to make her bisexual, leaving the door open to flirt with “Daddy Nick.” He was instantly drawn to Nick, and while I can’t say I agree with his assessment, we stan a bi-con! Additionally, his heart-to-heart with Isabella about coming out was super-moving and definitely set the two up for a strong connection.

Calvin started off doing very well but got a few scathing reviews. It seems like some people just simply aren’t buying his smooth demeanor and believe it’s covering up malicious intentions. At times, his flirtation with Kai is a little over the top, but it’s too fun to watch a relationship develop over those awkward voice-to-text messages. He’s a part of the all-male Wolf Pack alliance, and Calvin went out of his way to compliment Ruksana when her newest photo revealed that she’s a little person. Ruksana isn’t ashamed and wasn’t concerned about filling her competitors in on this fact, but Calvin’s comments made her feel more comfortable anyway.

Kai and Ruksana are dead on the money by saying Nick is playing this as if he’s on The Bachelor. Wrong show, honey! This routine will only go so far, and now that he has his sights set on Isabella, it’ll be exciting to see if he ever realizes he’s flirting with a gay woman. Regardless of his true personality, so far he’s just coming across as extremely arrogant. We’ll see if the Circle rewards this brazen…