But then the pandemic happened. The live portion of the Season 40 finale had to be done remotely as the winner was announced which definitely sucked. And even worse, Survivor couldn’t film any new seasons. They were supposed film 41 and 42 in Fiji from last March-June, but the pandemic obviously made that impossible. Eventually, things got better COVID-wise, but filming was still a logistical nightmare. Fiji had completely contained the virus, and they understandably didn’t want hundreds of people (cast and crew) from one of the worst COVID countries in the world to come over and film a show. Other ideas were thrown out about possibly filming in America, but nothing ever came to fruition. Instead, Survivor was stuck in limbo. They couldn’t film a season for the fall nor spring cycles last season. For a show that is 40 seasons deep and gets a lot of “That show is still on?!?!?!” remarks, missing that much time could’ve really been enough to end the show forever.

But something funny happened over quarantine. Survivor had a resurgence. Instead of all that missed time stalling momentum for the show and making people forget it exists, the opposite happened. People had nothing to do, so they binged a LOT of TV. And Survivor is one of the most bingeable shows there is. In a weird way, quarantine ended up being the best thing that could’ve happened to the show. If this was like a sports free agency article ranking the winners and losers of quarantine, Survivor might top the list of winners.

Two of the show’s best seasons, Cagayan and Heroes vs. Villains, got onto Netflix which was absolutely HUGE in reaching a new audience. People that assumed Survivor was just some dumb reality show about eating bugs got to see the show for what it really is, the greatest social experiment in the world and incredibly compelling television. Last March, I wrote a Survivor binge guide on the best seasons to watch. I was stunned at the number of people who reached out after that. I got a ton of DMs and tweets from people saying they tried the show for the first time, followed the guide, and loved it. People were flying through a season a day. While only two seasons are on Netflix, Hulu has the first 34 seasons and Paramount Plus has them all, so people had options. People who I never thought would watch Survivor reached out and said they loved it. Lil Sasquatch became a fan for God’s sakes.

It genuinely made me so happy when someone reached out to say they loved the show and thanked me for turning them on to it. It’s abundantly obvious by now, but I LOVE SURVIVOR. It’s my favorite show of all time. I’ve watched every episode with my dad since I was 4 years old. Eventually, it became an obsession. I’m not at Barstool today if not for the Survivor: Barstool fanfiction I wrote five years ago. Winning Surviving Barstool is one of the biggest personal accomplishments of my life (albeit that might sound pathetic). One day, I hope to get cast on the actual show. (If anyone from casting is reading this, my tape has already been submitted so please pick me. Thanks).

If you still have not tried Survivor, I am pleading with you to give it a shot. I can’t speak for exactly how great of a season 41 will be. Survivor has had some down seasons, and there are a LOT of changes for this season (more on that in a bit). But even the worst of Survivor is great television. If you have time to binge a season, I’ll suggest what I always do – Cagayan (Season 28) on Netflix. That will hook you on Survivor. I have truly never heard of someone disliking it. The hardest part is convincing people to give the show a shot, but once they do, they always love it. Always. There’s something for everyone. There’s mental warfare. Awesome physical challenges. Funny moments. High drama. Some T and A. The occasional showmance. Unexpected twists. You’ll have your favorites you cheer on. You’ll have the people you hate and wish death upon. It has everything.

And this year, we will be doing more Survivor content than ever. I really think and hope that Surviving Barstool got a lot of Stoolies who have never seen Survivor before into the show. Season 2 of that will probably come sometime in the winter, but in the meantime, we’ll have plenty of real Survivor content to hold us over. Each week, I’ll write a recap blog of every episode like I always do. But this year for the first time, we’re doing a Survivor podcast. I present to you…..Snuffing Torches 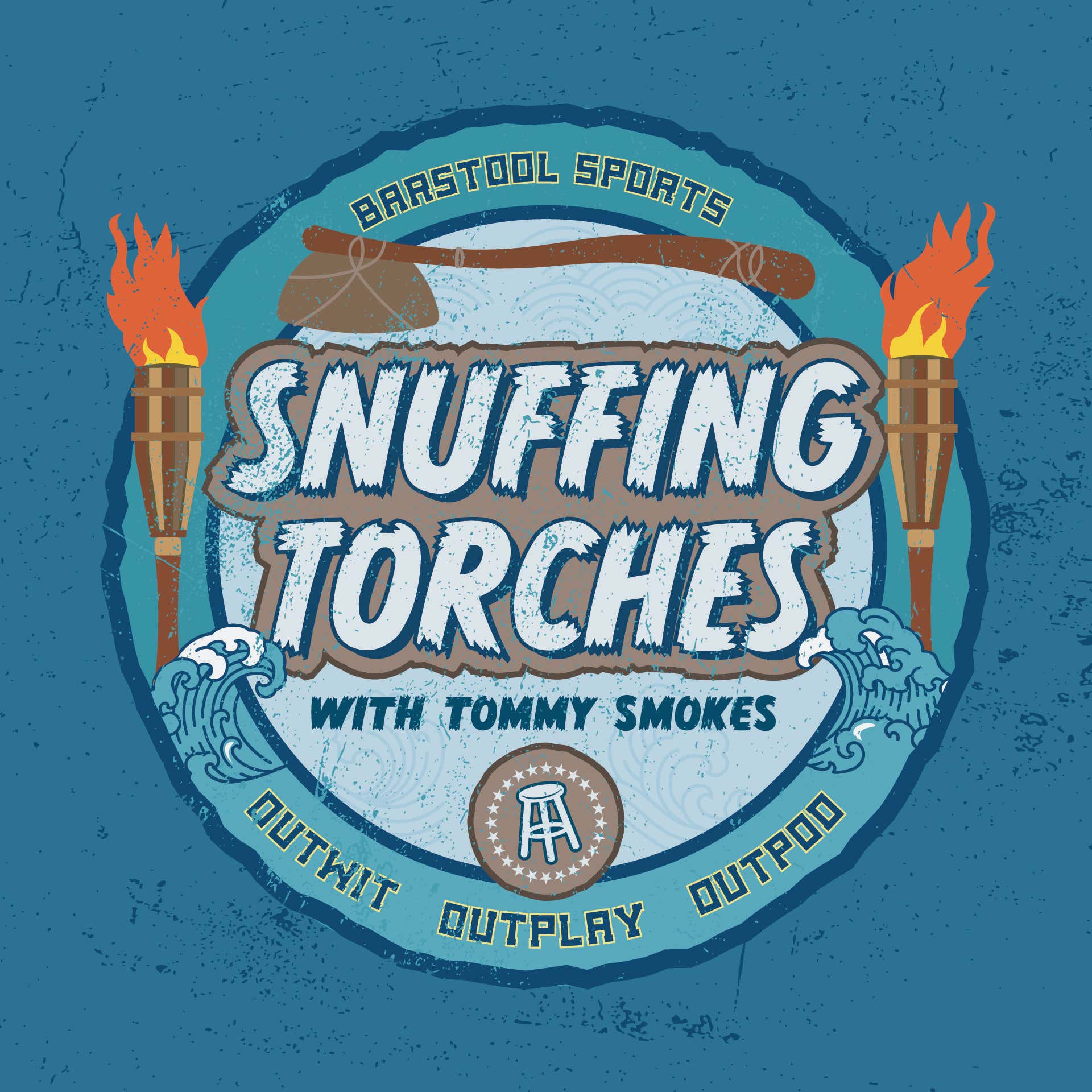 We’re going to record one episode a week right after the show airs and give our reactions and takes with some reoccurring segments. I’ll be hosting alongside the other big Survivor fans in the office – Nate, Glenny Balls, Jake Marsh, and Jeff D Lowe. It’ll likely be a rotating cast, and we’ll get former players involved too for recaps or one-off interviews. We have to prove ourselves before being officially Barstool sanctioned (a fair ask considering Survivor isn’t exactly Game Of Thrones). But I do genuinely believe that there’s been a huge renaissance for Survivor and I hope that carries through this season. Give both Survivor and Snuffing Torches a shot, and I promise you won’t be disappointed.

You can subscribe on Apple and Spotify and leave a nice, 5-star review. The intro episode is already up. Tell your friends. Tell your family. Tell random people you don’t know that well. If you know what a great show Survivor is, then convince them to give it a watch. And also give us a listen. If you love this show as much as I do, let’s revive Survivor together.

Alright now onto the Season 41 preview.

First, let’s talk about some of the changes. I blogged all the changes more in depth here if you want to read up. But I’ll also give a brief summary in this blog too.

26 Days: For the first time ever, Survivor is shortening its season. 39 days always seemed like the perfect number and it became part of the show’s fabric. “39 days. __ people. ONE Survivor.” It’s not totally clear why they’re shortening it, but we can assume it’s a COVID thing where they might want to wrap filming up quicker? This is a pretty significant change. But to make up for the shortened season, we have another change.

Harsher Conditions aka “The Monster:” In every promo, we keep hearing Jeff talk about how “the monster is coming” and the players better be ready for it. And nobody really knows what the fuck that means exactly. But in an interview, he did say that conditions will be harsher. “The tribes are not given any daily food staple, and reward challenges are scarce.” The challenges are also supposed to be way more physically intensive. All these changes will try to offset the season being 13 less days.

No theme: For years, Survivor has always had a theme to every new season, either in how the tribes are divided or revolving around a specific twist. Eventually, they started to feel really forced. “Heroes Vs. Healers Vs. Hustlers” was the most egregious example of that. Now, they’re just going with the basic “Survivor 41” and I like that a lot. The castaways will be divided into three tribes of six, but not based on anything specific. This is good.

“Faster, more dangerous and much more intense game:” More cliches that we don’t really understand. But I assume it relates to this “monster” we keep hearing about. It also makes sense that the game does literally have to move faster since there’s the same amount of people but 13 less days.

Smaller tribes and votes being “often at risk:” This comes from another Jeff quote. “Tribes are very small throughout the season, which makes Tribal Council even scarier because there is nowhere to hide. And votes are often at risk, which means you can’t ever rely on how many votes your alliance will have at any Tribal Council.” Tribes staying small is very interesting. I guess no tribe swap into like two tribes of 7 at 14. But how does this impact the merge? There’s usually at…