Gundam Reconguista in G, or G-Reco, sees the mega-franchise’s founder Yoshiyuki Tomino return to the director’s seat and boy is that a loaded statement. Jean-Karlo and Nicholas attempt to figure out what the hell is going on in a show that features a religion centered around elevators.

Disclaimer: The views and opinions expressed by the participants in this chatlog are not the views of Anime News Network.
Spoiler Warning for discussion of the series ahead.

What’s this!!! This thing has more power and more armor than a mecha, it’s completely different! This is no Zaku, this can only mean… IT’S A GUNDA—! 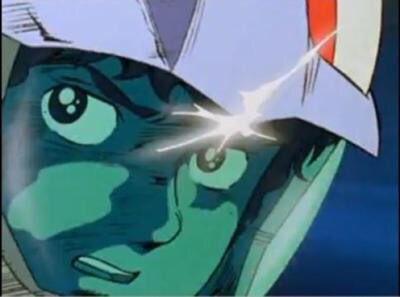 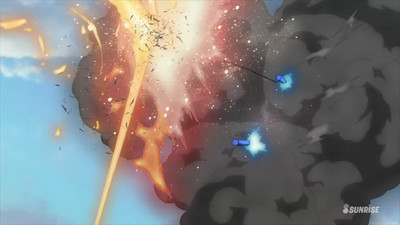 By god, we’re doing it. Eight years later we’re somehow, inexplicably, covering G-Reco. May God have mercy on our souls. 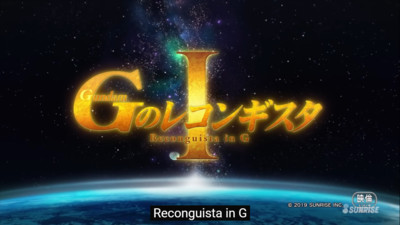 Specifically we’re talking about the first 2 (of 5) recap movies, which were very suddenly released into the wild on Gundam.info’s YouTube page this week. And lemme tell ya, getting surprised with G-Reco out of the blue is truly the only way to experience it.

Gundam creator Yoshiyuki Tomino has set himself apart as being a very opinionated storyteller. Much like Captain Jack Sparrow, even if you don’t like his works you probably have heard of them, at least. The likes of Aura Battler Dunbine, Space Runaway Ideon, and Overman King Gainer are nevertheless influential even if they don’t always hit their mark. And, y’know, Mobile Suit Gundam has been the anime equivalent of Star Trek since the ’70s. It may lack much of the flashy flair of modern Alternate Universe Gundam like SEED, 00 or G Gundam, but make no mistake—this new G-Reco isn’t just for show.

I have a…complex relationship with Tomino. For one, the first thing by him I ever saw was Garzey’s Wing, at once the best and worst possible introduction to the man’s signature style. Worst because it sucks unholy ass, and best because it partially inoculated me to the bizarre way this dude directs anime. 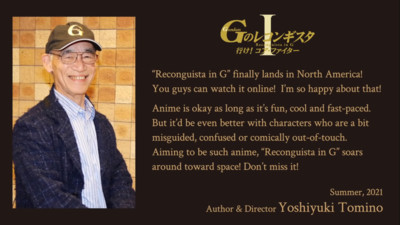 Tomino cares very little for traditional sensibilities in storytelling. This is a guy who thinks killing off the entire cast at the very end of the show is perfectly reasonable and will not hesitate to do it as a matter of fact. He’s also very unafraid of very bizarre turns of phrase. 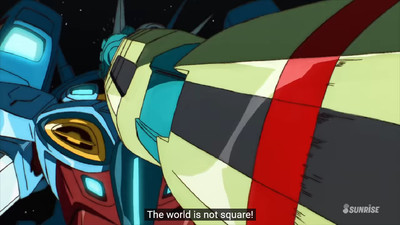 Boy is he! About half my G-Reco experience is keeping a running list of the proper nouns and/or names in these two films. I sincerely think somebody needs to publish a Tomino-to-Human dictionary some day. 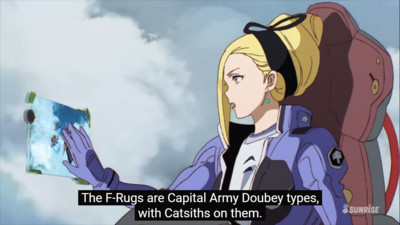 But it’s not just the Proper Noun soup, it’s Tomino’s entire approach to directing and writing dialogue. Characters will hurl non-sequiturs at each other in place of conversation. People will break in and out of tears at the drop of a hat. We’ll see characters react to and comment on things off screen and never see them. The first five minutes introduces an important piece of in-universe terminology and then doesn’t explain until half-way into Movie 2. 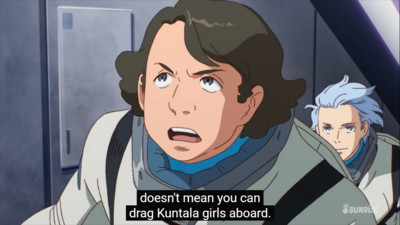 His naming schemes are also pretty out-there, he of the infamous names “Bright Noa” and “Char Aznable”. 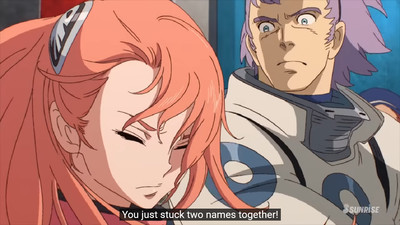 I could not tell you if this is a name, a curse word, both, or neither. 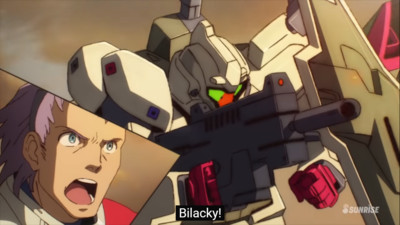 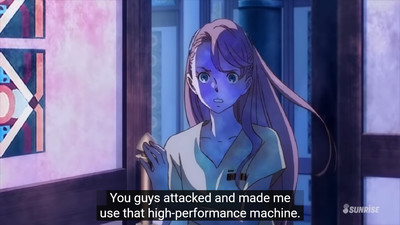 That’s one thing that struck me about G-Reco, right out of the gate. The robots may look particularly toyetic this time around, and the characters are pleasantly colorful and memorable, but so much of the aesthetic and visual language behind the G-Reco movies is taken straight out of the original Mobile Suit Gundam. Dramatic moments are punctuated with bizarre color filters, there are constant cut-ins to demonstrate pilot reactions, robots are almost intentionally weird, and all throughout there is politicking that shouldn’t make sense and yet… does. 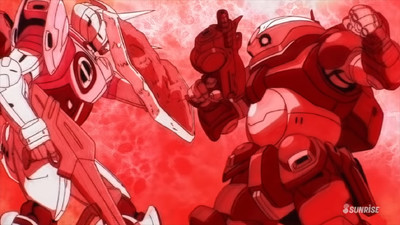 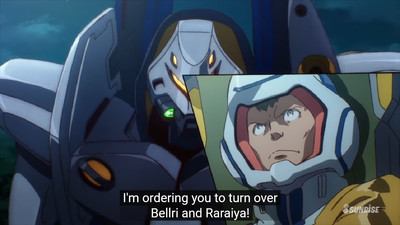 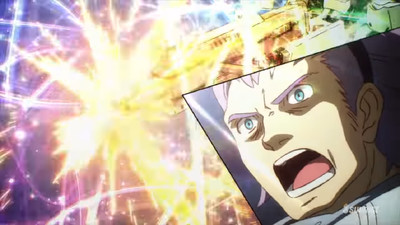 I will say, for all my issues with these films, the design and animation work are not among them. Kenichi Yoshida is now 2 for 2 on great character designs in unconventional mech anime, and while the action can be inconsistent, the fights look fantastic when they want to. 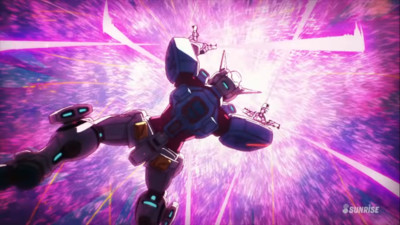 With all this preamble, we ought to fill folks in on the story. Taking place long after the Universal Century (the mainline Gundam timeline), the Earth has kinda-sorta-not-really settled into a peaceful-ish situation. SU-Cordism, a religion that worships the Capital Tower space elevators, reigns supreme and has banned all technological progress. Meanwhile, a war rages between Ameria and Gondowan for photon batteries, the main power source in this universe. And the only place these can be recharged is the Capital Tower. 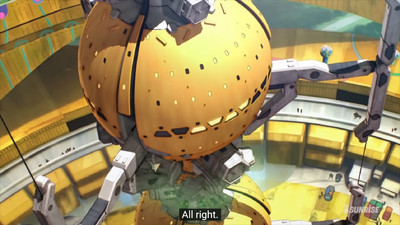 That’s a lot of vital information, which is fittingly communicated piecemeal across these two movies + some additional wiki surfing. Anyway, into this precarious situation drops the G-Self, a shockingly high tech mobile suit none of the countries have seen before, piloted by Raraiya Monday, who would be very important if her brain didn’t get turned into scrambled eggs 30 seconds into this movie. 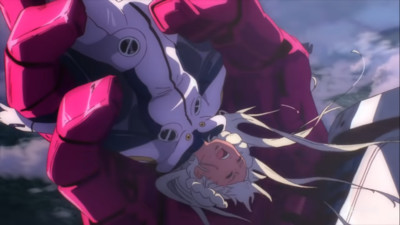 Smash cut to a bunch of teenaged pilot candidates, featuring this ball of sunshine: Bellri Zenam, or Bell for short. He’s a prodigious pilot, having been skipped up two grades. He and his fellows are candidates for the Capital Army, a peacekeeping group that helps protect the Capital Tower from space pirates looking to plunder photon batteries. 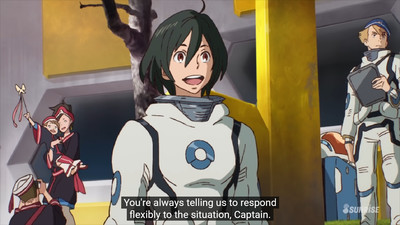 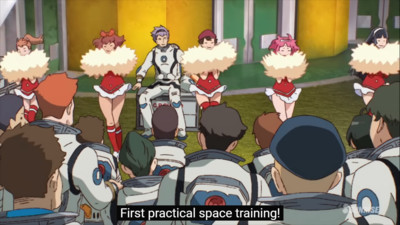 Specifically one cheerleader, Noreda Nug, a girl with a dank name whose main job is to get jealous over Bell talking to other girls, and eventually babysit Raraiya while she recovers from oxygen deprivation. 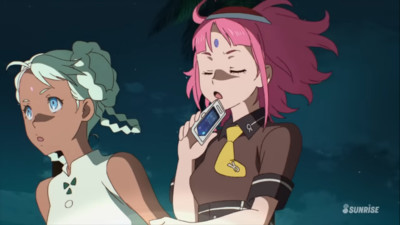 Between Raraiya and the other cheerleaders, I wanna take a moment to applaud G-Reco for its wide diversity in character design. There are more people of color in these two movies than I’ve seen in several months of working for this column. A lot of this feels like Tomino’s attempt at portraying Americans, and I appreciate that he has put effort into ensuring that people of color are part of the story as villains, heroes, and people in-between. 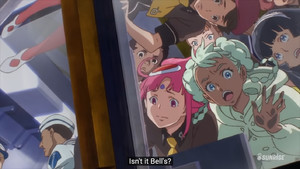 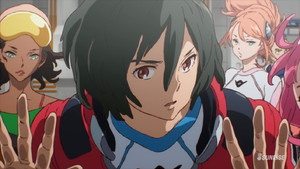 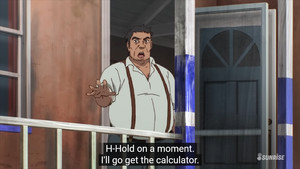 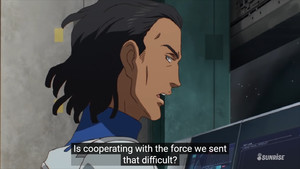 In a genre that has a very bad habit of forgetting to place people of color in the future, I appreciate the effort. Claudia LaSalle would be proud.
On the topic of details, some of my favorite stuff in these movies is actually the tiny extra details spared to the mechs. They’re of course outfitted with a ton of different weapons, but there’s also neat inclusions, like how they all come equipped with retractable, omnidirectional airbags because pilots don’t believe in seatbelts. 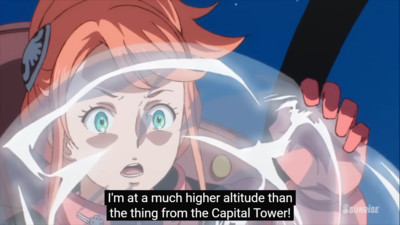 It was a nice touch! Definitely some well-thought-out engineering that helps make these bipedal mechs more believable.

Though it’s not all practical. Like these fucking ostrich walkers everyone uses instead of cars for some reason. It reminds me of the mobile, AI-controlled rotary payphones in the original Macross as just some wonderfully absurd retro-futuristic design. 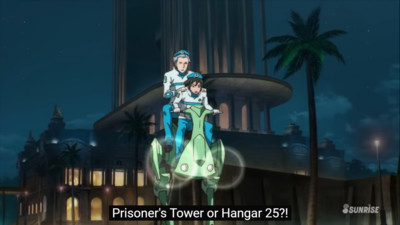 We even see later on that they have Segway technology, but everyone just hops aboard the Birdmobiles, seemingly just for the fun of it.

I appreciate that they’re called “Shanks”. I know it’s weird, but it feels like such a fitting, well-worn name for these things. What else would you call them? What else would people call them after having used them for so long? Again, Tomino’s writing is weird, but you can’t fault him for his worldbuilding, hare-brained as it might be.

It’s unique, I cannot deny. I just wish the actual nuts and bolts plot points (not to be confused with Nuts, which are an important plot point) were communicated in a way that doesn’t require a Tomino Decoder Ring to figure out. Like when our actual female lead arrives, inexplicably in the G-self, for reasons that get explained half off screen. 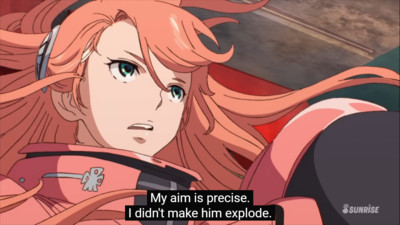