THE PERFORMERS | Tom Selleck and Will Hochman

THE PERFORMANCE | The introduction of Joe Hill, three years ago this May, was one of the well-watched Blue Bloods’ smartest moves. The offspring of a late Reagan son viewers never knew, his arrival added a curious new branch to the family tree, and the character’s every, intermittent appearance speaks to how he is a Reagan but without all the trappings. (And oh, how they have trappings.)

This week’s episode, in which Joe and his grandfather, Frank, clash over how best to investigate the vandalizing of Joe Reagan’s headstone, not only gave Hochman his meatiest material yet, it invited Selleck to play some new notes with the regularly infallible Frank.

When Frank — upon learning that Joe flagrantly disobeyed his “ask” to let him handle the investigation — called his grandson on the carpet in his innately intimidating 1PP office, the performances and crackling dialogue had you rapt. See, Joe Hill doesn’t stick to the Reagan family script. He, perhaps to a fault, isn’t inclined to respectfully acquiesce to grandpa. When Joe contended that he didn’t see his own grandfather’s temperature rising over the act of vandalism, Frank shot back, “Look harder,” and those two, little words hit like a ton of bricks.

Selleck and Hochman excelled in a pair of other scenes — first, in what was one of the most awkward moments in Reagan family dinner history, when Joe brought up the broken headstone… and instantly realized that no other family members had been told of the incident. It is here (under the direction of cast member Bridget Moynahan, it should be noted) that Selleck’s Frank was, in an extremely rare instance, at a loss for words. He had no eloquent speech to explain his actions, other than to save the others from feeling pain/outrage. No, this was a Frank that was borderline mortified, one who as Joe stormed out could only up a meek, “I’m sorry.”

Closing things out was Frank and Joe meeting back up at Joe Reagan’s grave, where Frank invited his grandson to uncover the new headstone — which had been updated to read, “Beloved Son, Brother and Father.” Touched, Joe noted, “It’s perfect.” As was so much about Hochman and Selleck’s work throughout the hour.

HONORABLE MENTION | There are two big reasons why The Rookie‘s “Chenford” works: Melissa O’Neil and Eric Winter. From Day 1, even when “boot” Lucy was getting chided on the regular by TO Tim, the actors exhibited an easy chemistry that the writers clearly saw and could not ignore. Years and multiple cop-blocks later, this Tuesday we arrived at Lucy and Tim’s first date, and while one might have initially groaned at the “Look at How Awkward This Is, Friends Being Romantic!” trope, O’Neill and Winter elevated it with sweetness and warmth. But O’Neil and Winter bring more than heat. A big draw with #Chenford is the rom-com moments they share, whether brainstorming, perfectly in synch, a cover story for their rendezvous, or mentally jabbing at each other in the hallway. Add in a food truck do-over date, where the menu included a perfect first kiss, and you had one of O’Neil and Winter’s finest showcases. 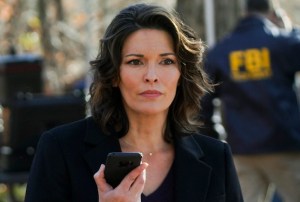 HONORABLE MENTION | As FBI this week turned its attention to Special Agent in Charge Isobel Castille, Alana De La Garza nicely explored the complexities of an extremely bittersweet discovery. To recap: An abducted woman turned out to be the grown-up tyke who years ago was declared dead after Isobel and her partner Jack Reed investigated a kidnapping. But whereas Jack saw Annabelle’s existence as a huge win, Isobel was all too attuned to the darker implications, that they bungled that old case and in doing so left a mother to needlessly mourn a child. Every step of the way, De La Garza made clear Isobel’s resolve to make things (as) right (as they can possibly be) — perhaps no more so than when she demonstrated a certain disgust at Jack’s heel of a take on the matter. It’s not often that Castille gets the spotlight; De La Garza proved that it should happen a bit more.

What to Watch: The Watchful Eye; Pamela, A Love Story; The Ark

The Walking Dead EP: Potential in Spinoff About Variations of Walkers?

The fallout of the truth begins