Welcome again to our weekly feature where we look at the most popular streaming movies and TV shows in Australia based on data collected by streaming search engine JustWatch. Data includes subscription streaming as well as transactional streaming titles. Click here to read last week’s roundup.

It was all about Premium VOD this week, as Aussies splurged on movies that they are not getting (for free) with their streaming subscriptions. While “The Suicide Squad” was still at the top of the chart, newcomer premium VOD movie “No Sudden Move” was in second place. Other premium VOD movies include “Escape Room: Tournament of Champions” in 4th (the original movie, Escape Room, is also in the top 10 at 5th, but this was is available on Netflix), “Carriers” in 7th and “In the Heights” coming back to the top 10 at 8th.

Netflix’s much-maligned The Starling did get into the top 10, at 9th. 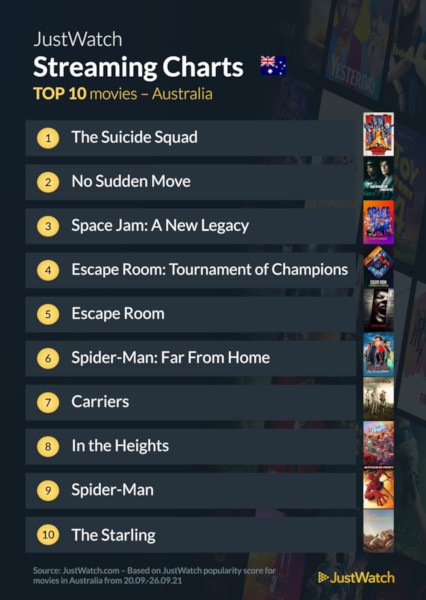 Korean action thriller (horror?) Squid Game has been getting some attention in the press lately with its social commentary-laden, Hunger Games/Battle Royale type storyline and has become one of the biggest foreign streaming hits in recent times. They had me at Battle Royale. “Squid Games” was 5th.

BritBox series Manhunt came in at 6th, while there was a return to the top 10 for the excellent “Mare of Easttown” (Binge/Foxtel Now). Apple TV+’s big-budget sci-fi epic “Foundation” enters the top 10 at the relatively low 9th place – not helped by average critical reviews and anti-SJW bombing of its IMDb rating due to (and I quote) “excessive diversity” (too many non white people compared to what they thought would be from the books) and “gender swaps” (changed the gender of one of the main characters from the book). I’m still going to watch it though because they had me at “sci-fi epic”.

Out of the top 10 were “The Morning Show”, “The White Lotus” (after a really good run), “American Crime Story”, and “Dexter”. 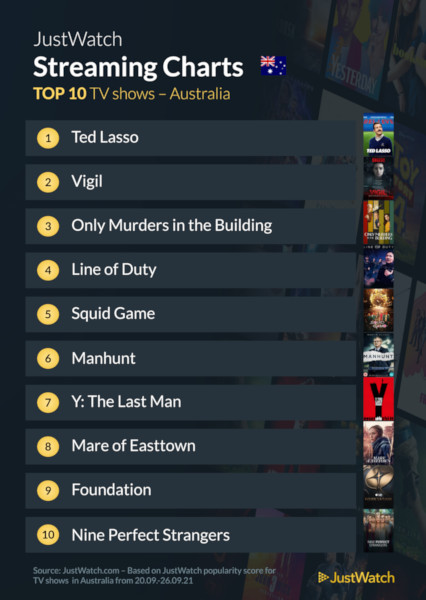 Looking for more content to watch, or looking to see where you can stream that TV or movie you want to watch? JustWatch allows you to easily search for a piece of content and find out how to stream it legally in Australia.