(This article contains major spoilers about Season 3 of You. Episode 4 also contains a suicide trigger warning.)

As far as season cliffhangers go, Season 2 of You left viewers feeling like they’re suspended over a 100-metre drop into a swamp of man-eating crocodiles.

So to say we’ve been eagerly awaiting its return is a bloody massive understatement (pardon the pun).

Netflix dropped Season 3 of the chilling series on October 15 and finally, we get to find out what happens to our favourite stalker Joe Goldberg (Penn Badgley) and his obsession-turned-girlfriend, Love Quinn (Victoria Pedretti).

Want more TV news? Sign up to Kidspot’s Talking TV newsletter for all the up-to-date news sent straight to your inbox. 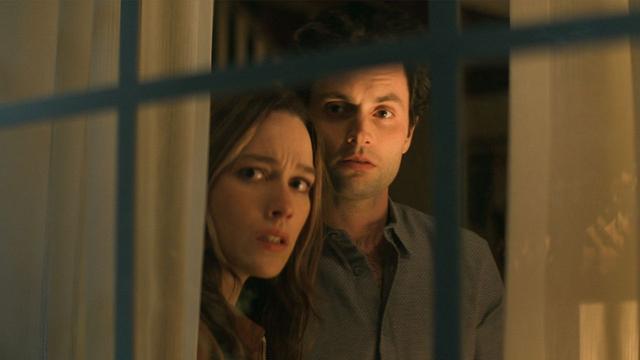 Love and Joe in Season 3 of You. Source: Netflix.

To recap, the end of Season 2 ended with Joe about to murder Love after he discovers that shock, horror, she’s not the angelic woman he fell in love with but in fact killed his investigative journalist neighbour, Delilah, and his ex-girlfriend, Candace.

Joe spares Love a grizzly end in his glass murder chamber after she reveals that she’s carrying his baby, and they move to a picture-perfect, yuppy Californian neighbourhood in an attempt to be a monogamous husband and wife and model parents to their baby boy, Henry.

There are no prizes for guessing that’s the opposite of what happens in Season 3 because let’s face it, the whole reason to watch You is because it’s a completely unpredictable psychological thriller that we binge to find out not if the main leads will be bad, but just how bad they’ll really be.

This time, our villains are even more grown up, and the issues You delves into – marital conflict, addiction, parenting and childhood trauma – are equally age appropriate. Without giving the major plot away, here’s what we’ve unpacked from Season 3… 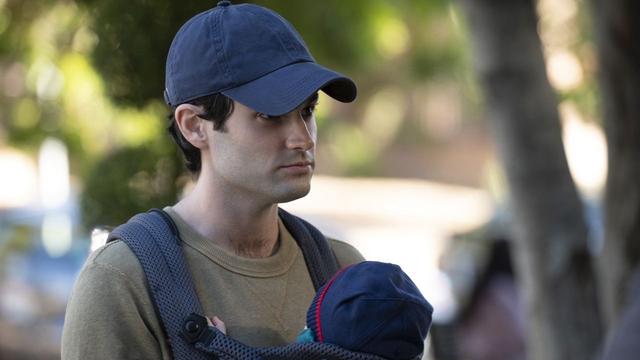 Joe in his infamous stalker get-up with his newborn son. Source: Netflix.

It’s all about the new neighbour – or is it?

One of the great things that You does well is make you think that the roller coaster is going in one direction, when it suddenly takes a dive and you’re thrown into a dark tunnel, only to come out at a completely different place than you imagined.

The show’s writers have done this more times than we can count, and the thrilling ride begins in the first episode when we meet Joe’s new object of lust, his beautiful and flirty neighbour, Natalie (Michaela McManus).

While we don’t assume he and Natalie will have an affair that ends without any casualties, it’s pretty shocking to witness what happens to her so early in the series, when we assumed there may be a longer build-up of cat-and-mouse as was the case with his previous obsessions.

That plot twist sets the pace for the entire season, and the investigation into what actually happened to Natalie is what ends up entwining Joe, Love and their new circle of secret-hiding friends into a complicated web of sex, lies and lots of spattered blood. If it sounds like an episode of Desperate Housewives, then you’re not mistaken. Even Marcia Cross makes a guest appearance! Michaela McManus as Joe and Love’s neighbour in You. Source: Netflix.

RELATED: Nine Perfect Strangers: Is it better than the book?

Joe and Love are so messed up, they deserve each other

Could there be a more dysfunctional set of new parents in TV history than Joe and Love? Once you see Season 3, it’s hard to argue otherwise.

Yes, they’re hot for each other and love their baby boy more than life itself. But the theme throughout these 10 episodes asks the question, ‘Is love really enough?’

When they’re not covering up their own malicious crimes against perfectly innocent people, this murderous couple seem to spend a lot of time keeping the skeletons in their closet from one another and going to great lengths to pretend they’re happy living the white-picket-fence lifestyle while they work out how to dump yet another body in a bag, or lock someone in their new glass cage.

Sure, they have some beautiful tender moments where they lay their emotions on the table and dig deep in marriage counselling to heal old wounds to make a better life, but it’s hard to root for their happily-ever-after when they are just as unhinged as each other.

The neighbours we love to hate

Initially dished up as two-dimensional showpony parents who only care about what’s on their Instagram feed and dishing out unwanted advice, each episode reveals a completely unexpected side to this couple who may live to regret the interest they show in Joe and Love’s private life.

RELATED: Should you watch Scenes from a Marriage if you’re married? 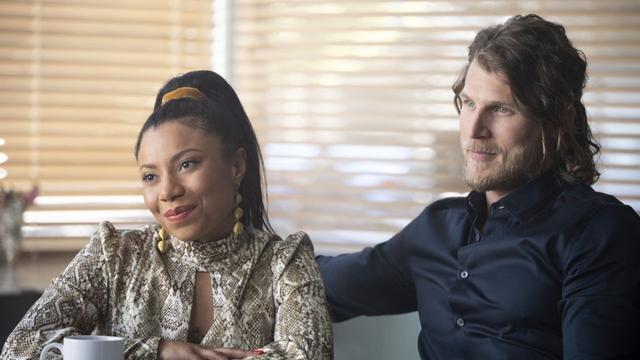 Shalita Grant and Travis Van Winkle as Sherry and Cary Conrad in You Season 3. Source: Netflix.

The baby gives us hope

When Joe discovers his baby is a boy – not a girl as he thought – and says, “I’m f*cked and so is he,” it’s an ominous sign that things aren’t going to go as he planned.

But dotted throughout the series, there are touching scenes of Joe and Love being perfectly normal humans as sleep-deprived first-time parents, trying to settle their crying newborn, being spewed on and sneaking in a quickie before the next feeding session.

A refreshing change from the previous seasons is that we see Joe’s fiercely protective side that’s desperate to protect his son from the suffering that he experienced as a child in the orphanage. When he sheds a tear in response to his baby smiling at him, suddenly we forget all the crazy behaviour from Seasons 1 and 2 …but only for a minute of course.

After all, Joe Goldberg isn’t the world’s most famous stalker for nothing. Bring on Season 4 (which has just been announced will go ahead)!

You Season 3 is currently screening on Netflix.

Read More:Two killers and a baby? The new season of ‘You’ is seriously messed up