If there’s one thing all thru-hikers take seriously, it’s their food. Thru-hikers are known for their ferocious appetites, devouring virtually everything in sight. For good reason too—a typical thru-hiker can burn upwards of ~5,000 calories per day. No matter how much or what type of food we consume, we are bound to shed some weight during our journeys.

Our diets typically consist of processed, sugar-filled meals along with tons of candy and desserts. We walk all day, up and over mountains, so we deserve to binge on sugary sweets to reward ourselves. Right?

Most hikers accept that their diets on-trail aren’t considered “healthy.” Still, some are determined to eat right while thru-hiking, such as by following a vegan diet.

I was one of them. 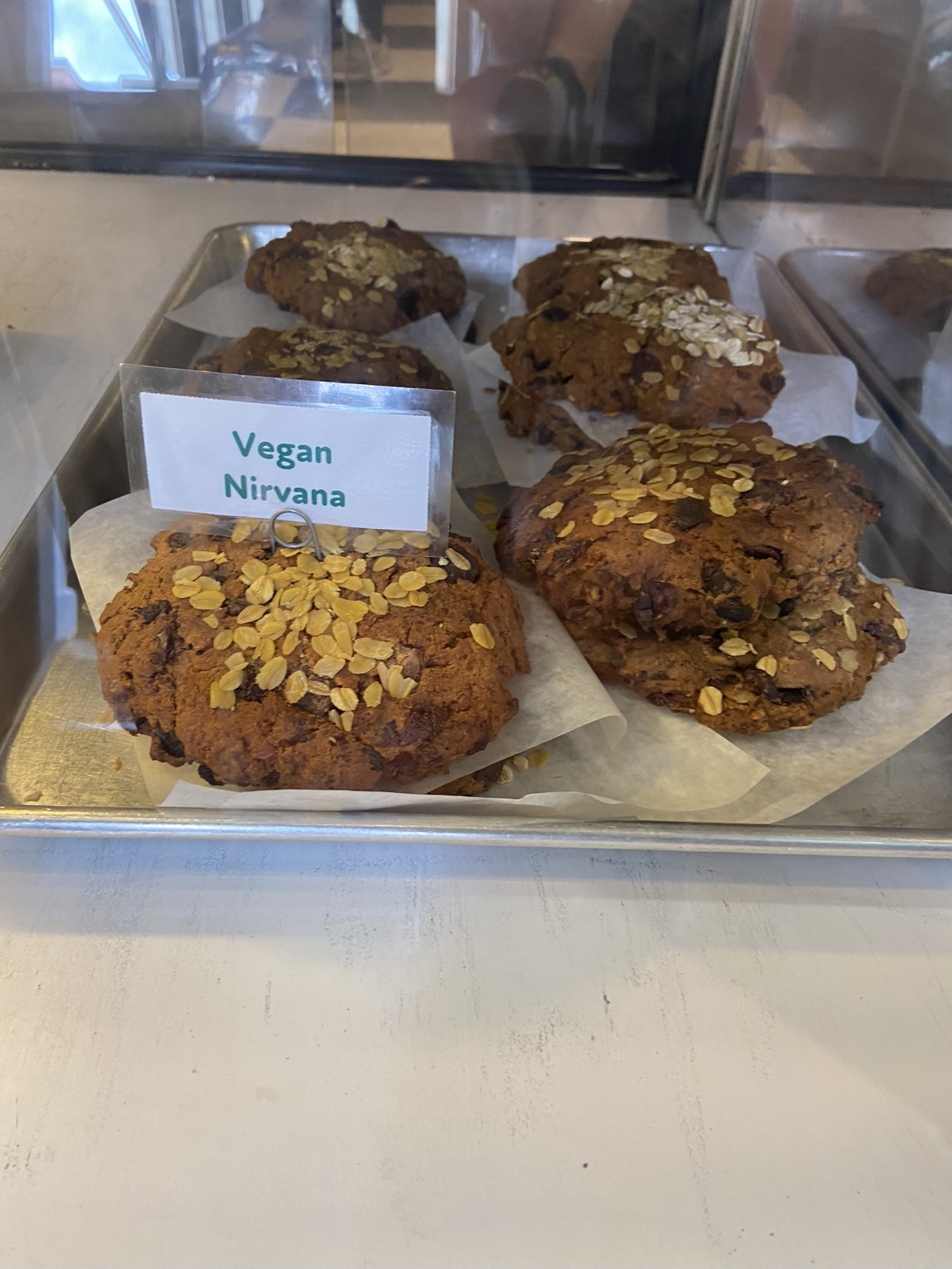 Prior to my thru-hike of the Appalachian Trail, I followed a strict vegan diet for about two years. I believed I would be able to maintain my vegan ways while making my way from Georgia to Maine. As my hike progressed and my hiker hunger came into full swing, I opted to become more flexible with my diet, relying on some vegetarian meals in order to get by. I met plenty of other vegetarian thru-hikers on the AT, but I only met one vegan thru-hiker.

READ NEXT – Weighing the Potential Health Risks of Thru-Hiking.

As much as I wanted to remain vegan on trail, I soon learned that this commitment might not be as feasible as I had imagined. Anyone who has hiked the AT in recent years knows how abundant trail magic can be.

For the first month or so of my thru-hike, it felt like I was coming upon some sort of trail magic almost every day. No exaggeration. While these trail angels will often have a few vegan-friendly options such as fruit or chips, many times their goodies consist of cookies, brownies, and even the occasional burgers and hot dogs.

Remaining completely vegan was doable for the first couple of weeks, but it took serious willpower. I looked on as all my friends replenished their bodies with calorie-rich baked goods while I ate a banana. I knew that as I got further north, my body’s cravings would only get more intense. 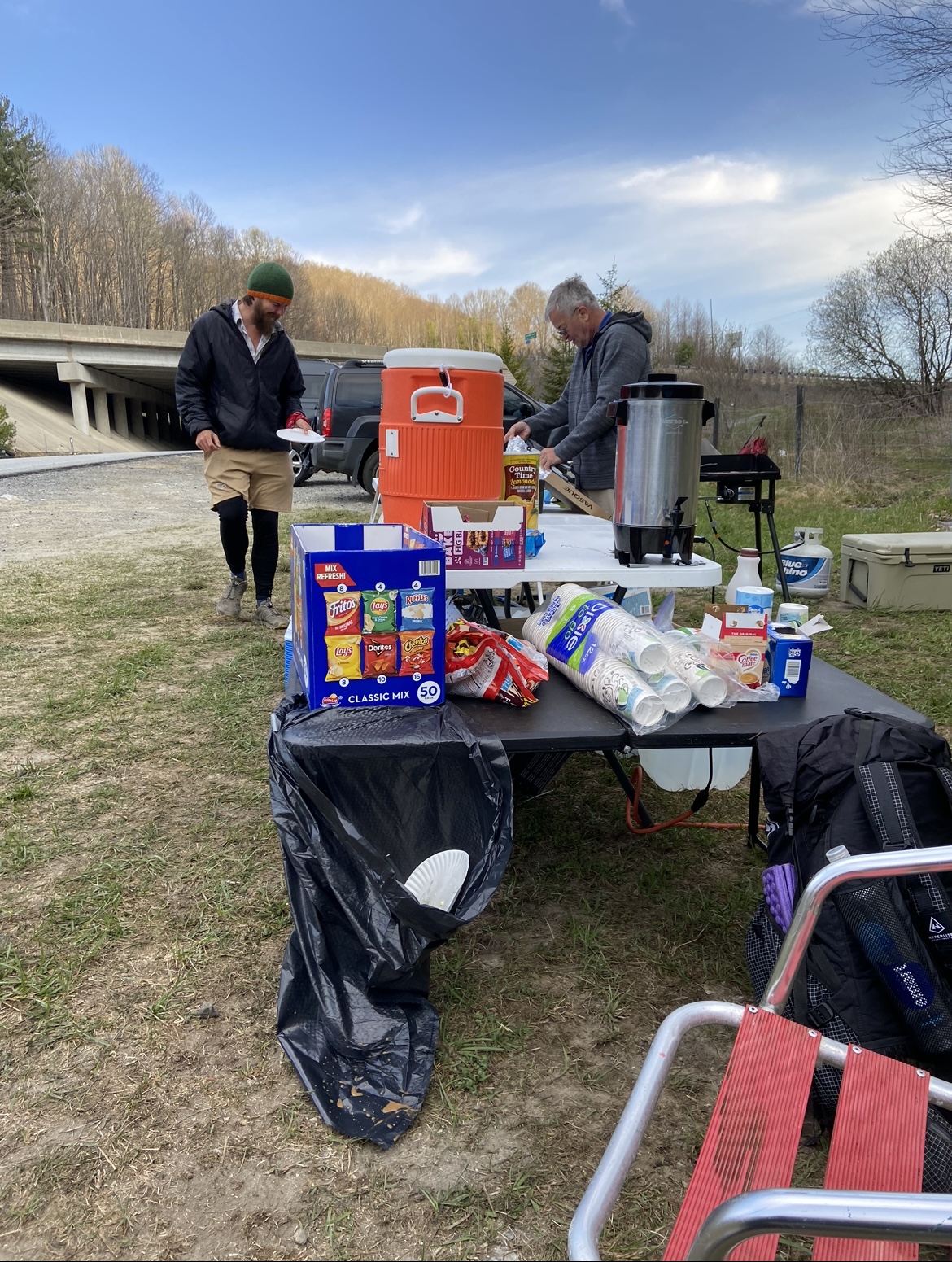 My breaking point came at a shelter in North Carolina, three weeks into my hike. Trail magic almost always occurs at a road crossing on the AT, and sometimes even right on the trail. I was camping at a shelter on top of a mountain at 4,000 feet in North Carolina when the unexpected happened.

My fellow hikers and I were hanging out at a picnic table, talking about what most hikers typically talk about: food. Later on in the evening, one hiker arrived carrying a massive backpack and introduced himself as Bloodhound.

Bloodhound emphatically dropped his pack on the picnic table and asked, “Who’s hungry?” Our eyes lit up as if we had just won the lottery. Bloodhound pulled out a massive tub of vanilla ice cream and two liters of root beer. I was blown away by his gesture, as was everyone else at the shelter. I simply couldn’t say no. Not only was I starving and craving something fattening and sugary, but I would’ve felt a bit rude turning down his trail magic. 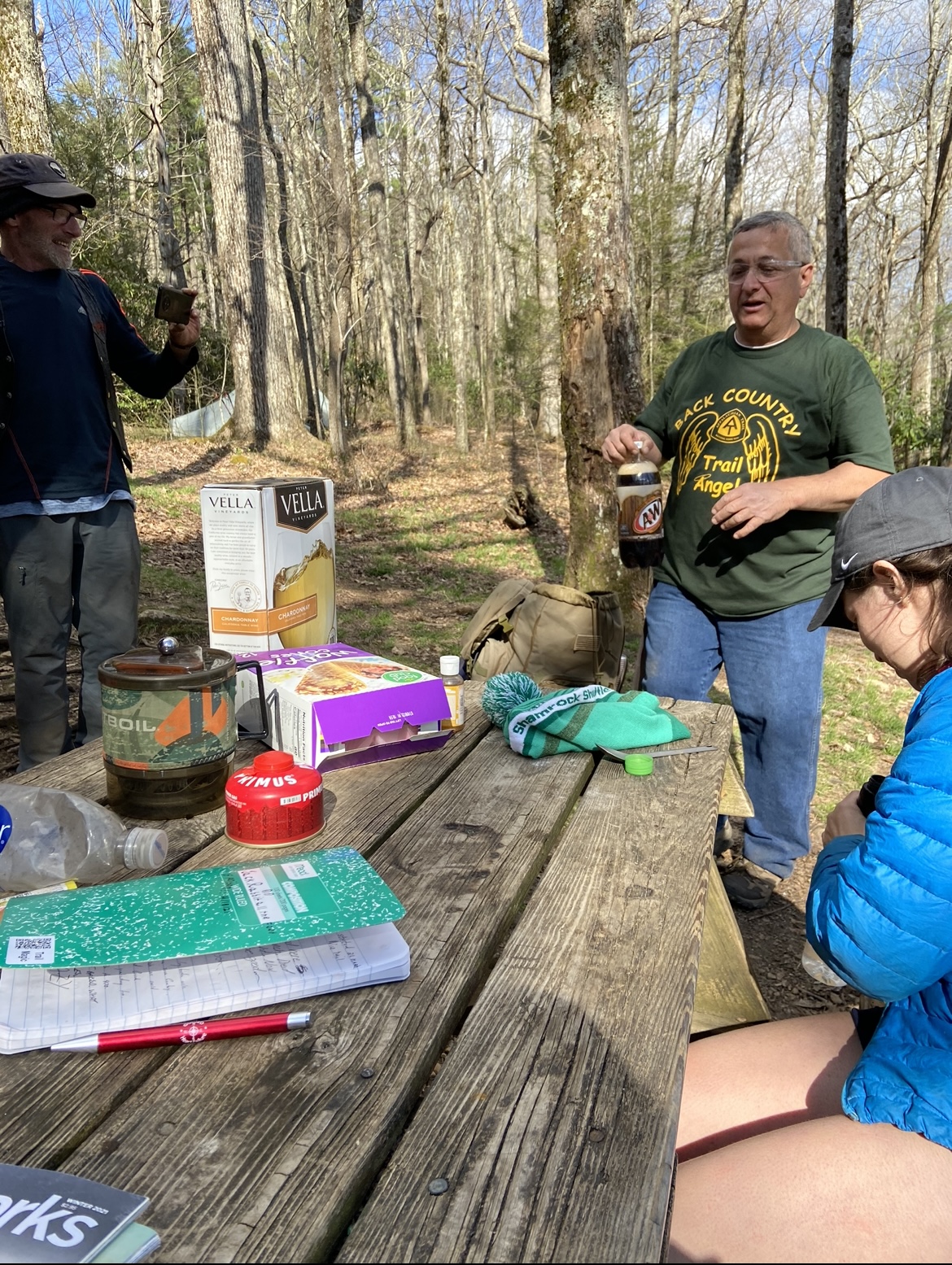 I mean, this man literally climbed several miles up a steep mountain carrying a heavy load of ice cream and soda just to satisfy us hungry hikers. How could I resist? For the first time on my hike, I broke my commitment and enjoyed a root beer float.

Throughout the remainder of my hike, I enjoyed any and all desserts that were offered to me as trail magic. What can I say? I’m a sucker for desserts.

I knew that I needed to listen to my body in order to successfully make it to Maine. My body’s craving for substantial calories could only be satisfied by being more flexible with my diet.

The moral of this story is that trail angels will go above and beyond to make sure hikers are well fed. It can be very tough turning down their gestures when your body is craving something fattening and sweet.

Eating Vegan on the Trail

Many people mail themselves food resupply packages throughout their thru-hikes if they have dietary restrictions. While this strategy may work, I can tell you that there is absolutely no need to go through the hassle of preparing and shipping packages all over the trail if you are planning on eating vegan on trail.

I can’t speak for other dietary restrictions, but I was always able to find vegan resupply options with ease, whether I was shopping at a supermarket, Walmart, Dollar General, or even a gas station (gas stations for only 1-2 days of resupply).

I only had one food resupply package sent to me, which was for the 100 Mile Wilderness. This was out of desire rather than necessity. I wanted to eat “luxurious” meals during my final stretch on trail, so I had my parents ship out a package containing Backpacker’s Pantry Pad Thai and Pro Meal bars, among other things.

It took quite some time for me to find vegan dinners that worked for me on-trail, but preparing healthier, vegan meals in the backcountry soon became second nature once I found foods that were both satisfying and tasty. The following were my three go-to dinner recipes that are quick-and-easy to make, very affordable, and have a good balance of carbs, protein, and fats. 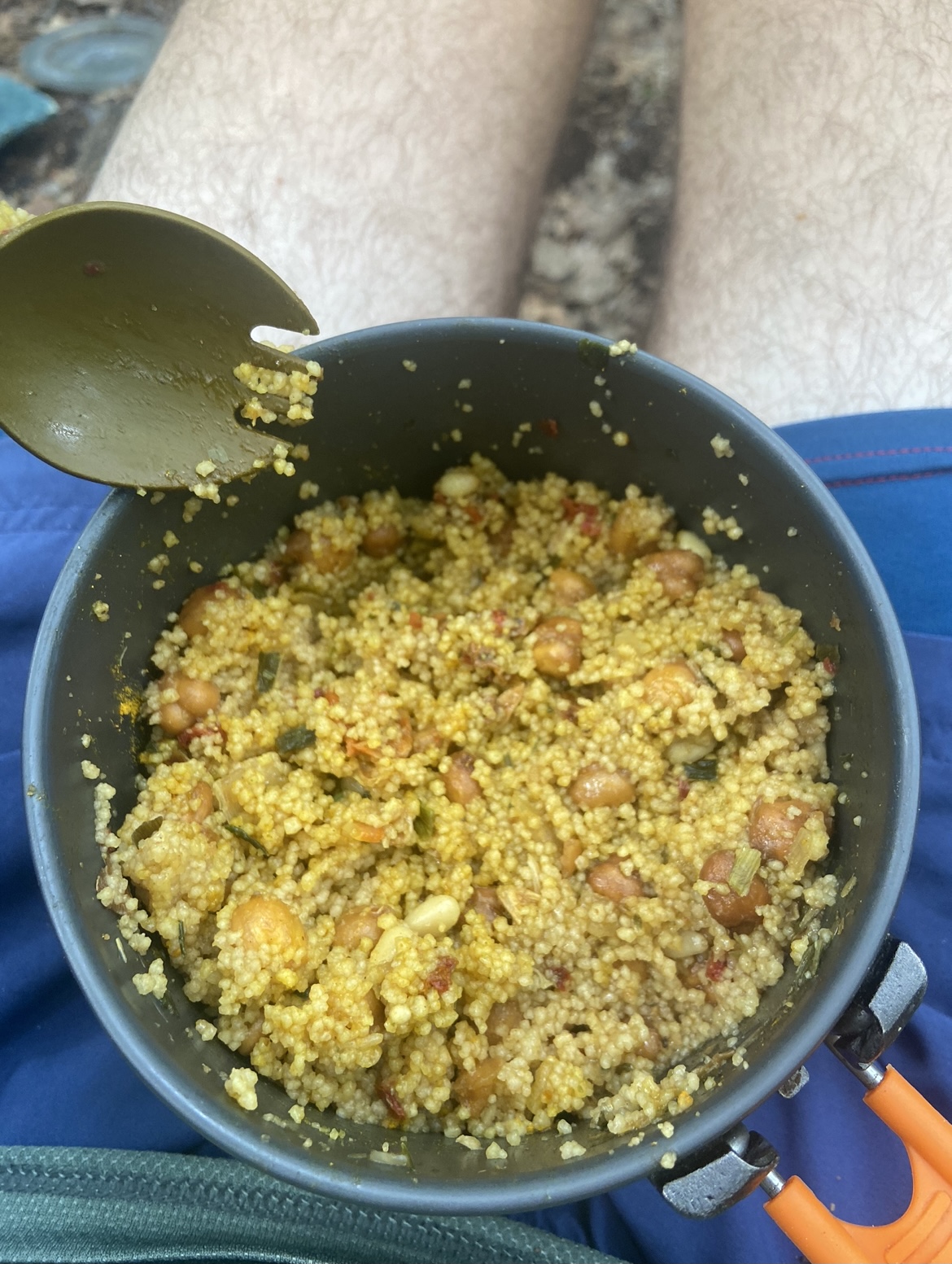 One of my go-to vegan meals on the trail: the loaded couscous bowl.

READ NEXT – 6 Trail Foods That Never Bore Me (No Matter How Much I Eat).

One of the first thing hikers look to do when arriving in town is to consume a hearty restaurant meal. Starting out, I was extremely worried that most small towns wouldn’t have any vegan options. I didn’t want to be stuck eating salads or french fries while my friends consumed burgers and pizza.

Several of the towns in close proximity to the trail are tiny and don’t have many dining options. Still, it turned out eating vegan meals in these towns wasn’t as difficult as I had imagined. 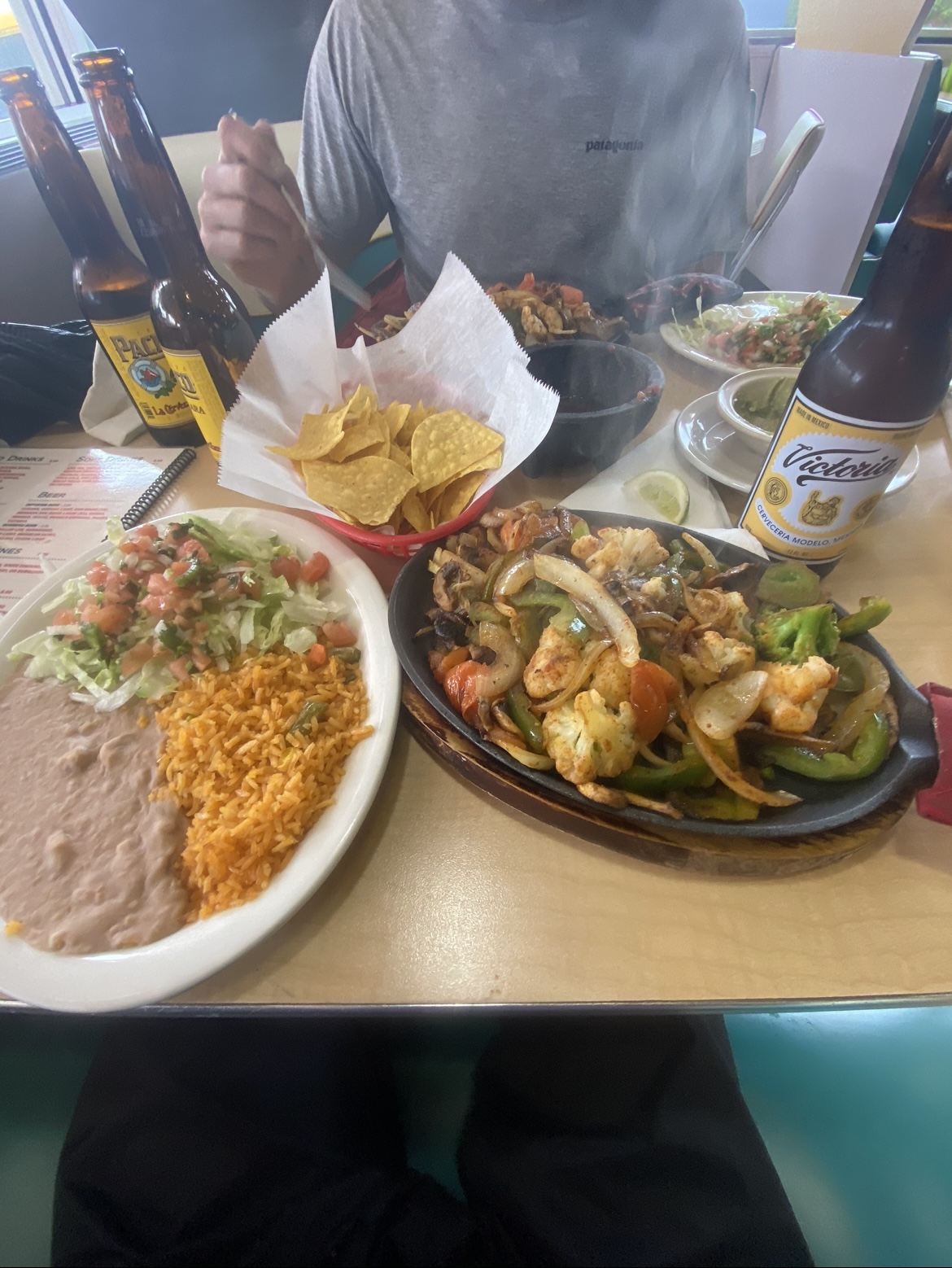 Mexican and Chinese restaurants are your best friend as a vegan hiker. These places almost always have some sort of plant-based meal options on their menu. Most breweries in these trail towns, such as the popular Lazy Hiker Brewery in Franklin, North Carolina, also have vegan options on their menu.

I was able to eat almost entirely vegan in several towns. However,  there were times when I had to be flexible with my diet and consume vegetarian meals because there were simply no other options.

If I were at a diner with my friends, and the only non-meat options were pancakes/waffles/eggs, I wasn’t going to allow myself to starve. I wound up eating whatever vegetarian options were readily available. Losing too much weight on trail is a legit concern for anyone, especially someone with a restricted diet. 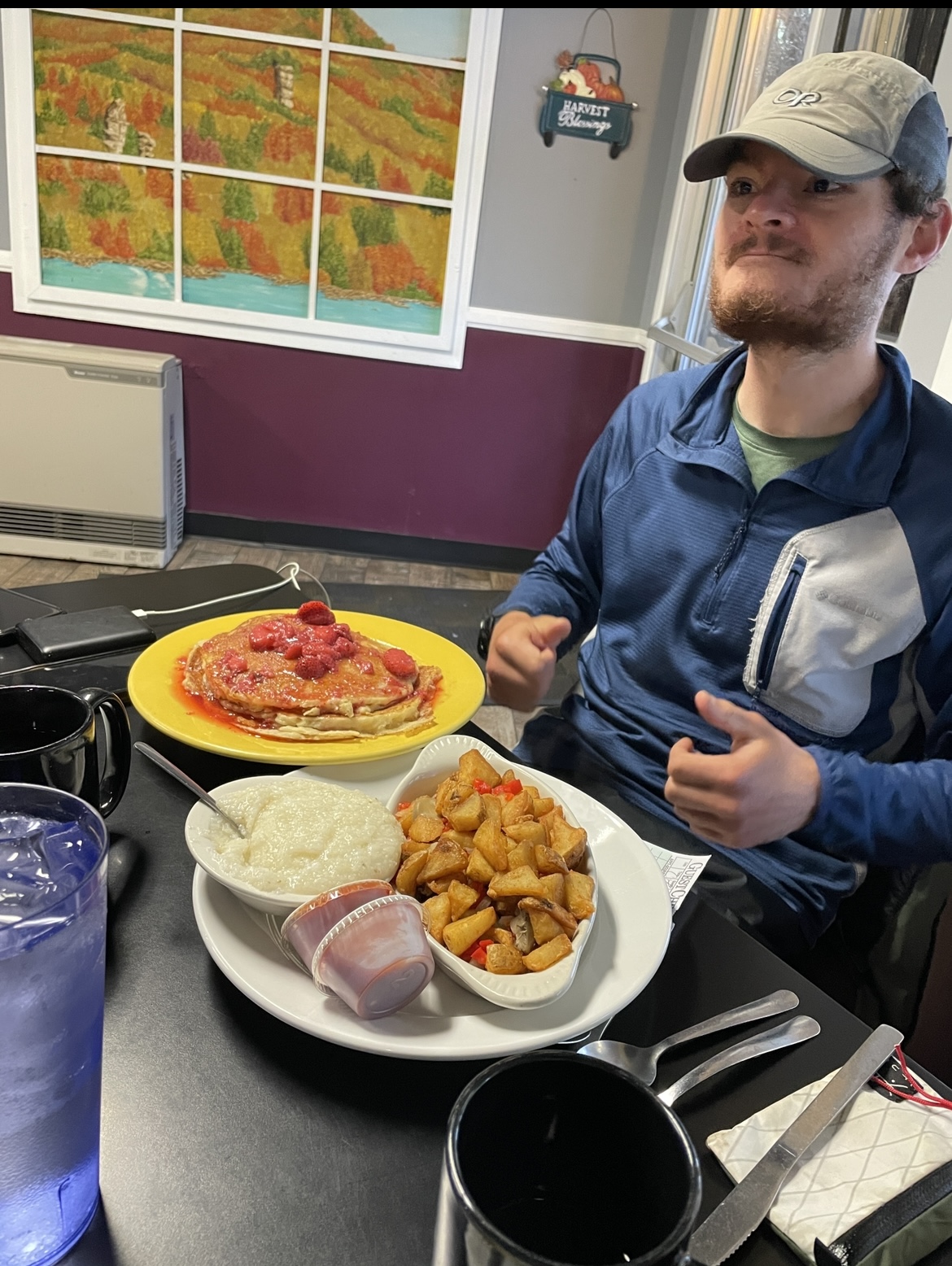 Most hiker hostels feature kitchens that hikers can use to cook their own meals. If your goal is remaining entirely vegan on trail, cooking your own meals will go a long way in towns without many restaurant options. Some hostels even prepare meals for their guests and will almost always go out of their way to make sure there are vegetarian/vegan-friendly options. Following a vegan diet in town isn’t as challenging as one might think, but it can be tricky at times.

So, is it actually realistic to maintain your vegan diet while thru-hiking the Appalachian Trail? The answer is yes—with a lot of willpower and logistical planning (such as making sure you are consuming enough calories and getting enough protein), it is certainly possible. It won’t be easy, but…

Read More:Vegan on the Appalachian Trail: Is It Feasible? – The Trek