It seems as though everybody is talking about Squid Game – the Korean drama that is becoming Netflix’s biggest series ever after millions began binge-watching the nine-parter back in September.

With fans scouring the internet for Squid Game costumes ahead of Halloween and recipes for the Squid Game cookies (those who’ve seen episode three will know what we’re talking about), many of Netflix’s younger subscribers may be tempted to check the Hwang Dong-hyuk series that seems to be everywhere at the moment – but how suitable is it for teens?

If you’ve read the summary plot for Squid Game or any of the recent Squid Game theories, you’ll know that it deals with a number of adult themes, from gambling and violence to drug use and sex – and while it is centered around a competition where contestants must take part in a series of children’s games, trust us when we say this show really isn’t for kids.

Read on for everything you need to know about Squid Game’s age rating and just how scary and gory the thriller is. 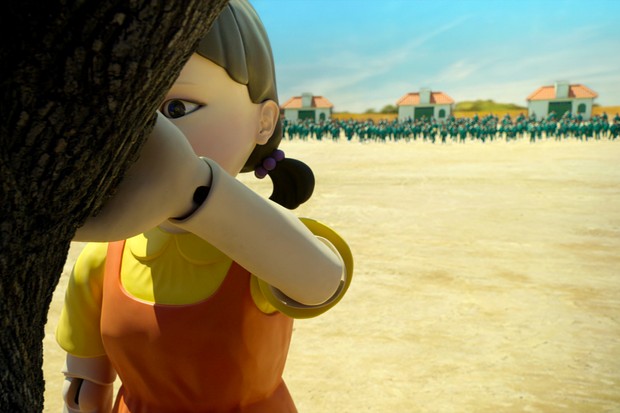 Don’t be deceived by the large smiling doll that often adorns the Squid Game poster on Netflix’s interface – Squid Game is certainly not suitable for anyone still young enough to be playing hopscotch, marbles or any of the other games featured in the show.

Unlike the 12a rating which allows younger viewers provided they are with a parent or other guardian, the 15 rating states that the material is “suitable only for 15 years and over” with no concession for accompanying adults.

This is hardly surprising considering the high number of deaths that occur during the series, usually during twisted takes on playground games that feature high levels of violence and even torture.

The series has drawn many comparisons to similar fight-to-the-death films such as The Hunger Games, however Squid Game is far more violent and adult-focused than the popular Jennifer Lawrence films.

There are also several uses of profanity, alcohol and cigarettes as well as a sex scene – so that 15 rating is well deserved, despite the moral lessons that occasionally rear their head amongst the bloodshed.

To protect your child from mature content on Netflix, see our guide to Netflix parental controls.

If you’re a bit squeamish and tend to shy away from violent TV shows, then perhaps Squid Game isn’t for you.

The hit Netflix show is rated 15 in the UK and contains a fair amount of blood since the tournament’s contestants are immediately killed once they lose one of the children’s games they are forced to take part in.

However, most of the deaths tend to be by gunshot, avoiding any view of human innards or sickening injuries and the camera doesn’t linger on any of them for any great length of time.

While the series isn’t as gory as films like Saw and The Suicide Squad, or dramas like The Walking Dead and American Horror Story, it certainly has its gruesome moments – particularly in the final episode.

For those less concerned with violence and more terrified of the classic jump scare, you’ll be pleased to know that Squid Game isn’t frightening in that sense.

More of a psychological drama than an all-out horror show, Squid Game maintains a steady sense of dread throughout, allowing viewers to become emotionally invested in its characters before killing them off throughout the nine-part series.

While a number of the deaths in Squid Game are sudden and can take you by surprise (especially in the first episode’s Red Light, Green Light game), the scariness behind the series is mainly in its dystopian Battle Royale-esque concept and the social commentary around class and wealth that is woven throughout.

Squid Game is currently streaming on Netflix. Looking for something else to watch? Check out our guide to the best TV series on Netflix and best movies on Netflix, or visit our TV Guide