The highly-anticipated release of the new Batman movie, The Batman is finally happening after multiple delays. The latest rendition of the DC Comics superhero is set to arrive on HBO Max from anywhere March 4 next year.

This fresh take on the eternal Dark Knight saga thrills fans for two more exciting reasons. First, Warner Bros. gets on board the blockbuster Dawn of the Planet of the Apes filmmaker Matt Reeves as director. Second, the much-loved and talented Twilight trilogy actor Robert Pattinson suits up for the iconic titular character.

Warner Bros. has newly released the incredibly stunning and action-packed trailer of The Batman lasting 2 minutes and 38 seconds. Since its release last week, the sneak peek has garnered almost 31 million views at the time of this writing. The official teaser has received positive reviews and succeeded in building a lot of hype among the viewers.

There’s still a luxury of time to spare between now and March, however. So, what’s there to do before The Batman finally hits the cinemas? Perhaps it’s the perfect time to catch up on the franchise, from 1966 to the Extended DC Universe timeline.

If you want to binge it now and wonder where to start, we’re here to save the day. We round up all the Batman movies in the best order to watch.

Before we do that, let’s tarry a little.  First, turn your nerd mode on as we first explore some interesting fun facts about the Dark Knight’s beginning.

The Creation of Batman

For more than 82 years, the Caped Crusader continues to amaze fans with his dark yet appealing character. From comic books to movies, the superhero never ceases to keep the audience on the edge of their seats.

Unlike other DC superheroes, Batman doesn’t possess superhuman powers. He is a man who solely depends on his high-tech batmobile, martial arts skills, and high intelligence quotient of 192.

He fights criminals in his city using some special gear that he often keeps in his utility belt. That pretty much explains why fans ask for more from Gotham’s super crimebuster without signs of getting old for many, many years.

Now, let’s get to business. Here, we list down the best viewing order to the Batman movies before watching The Batman in March.

The Best Order to Watch the Batman Movies

As opposed to Marvel Cinematic Universe movies, the Batman film series does not have a single chronological order to follow. That’s because the franchise has seen multiple reboots, from the original Batman movie up to the 2022 rendition.

For example, the DC Extended Cinematic Universe features Batman in a pivotal or sometimes, a background role. In the 2017 Gal Gadot-led Wonder Woman, Batman didn’t appear, however, he set the film’s plot in motion. Aside from that, Wayne Enterprises was mentioned in the first Man of Steel movie starring Henry Cavill as Superman.

In this regard, there’s not one definite viewing order to watch every live-action Batman movie. We rather suggest that you watch them in multiple orders, which all feature the Dark Knight.

Please note that you may encounter spoilers as you read on. But we include a bulleted spoiler-free list of the multiple viewing orders at the bottom. So, here we go. 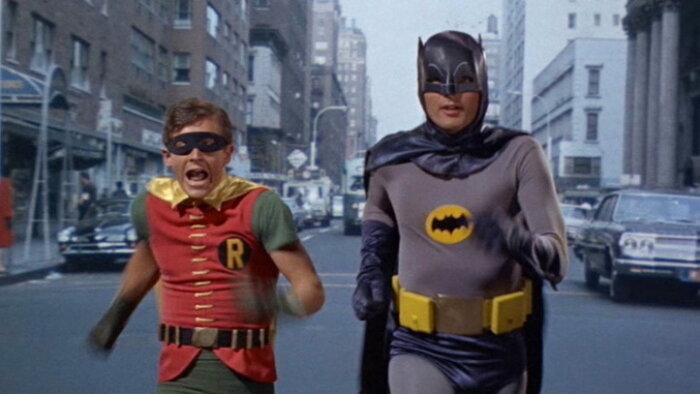 Batman: The Movie or simply Batman makes a perfect starting point to jump off your binge of all Batman movies. This entry is a standalone 1966 motion picture based on the Batman TV series.

It is the first-ever full-length film adaptation of the DC Comics superhero. 20th Century Fox originally planned to release the first-ever Batman movie before the airing of the 1966 TV series on ABC. However, it hit the theaters a couple of months after the premiere of the final episode of season 1.

In the film, Batman and Robin unravel the villains’ sinister plan to use a secret contraption that will dehydrate the entire humanity. As the baddies hold the lives of people in their hands, they demand ransom in exchange.

The superhero tandem now must come to the rescue and save the world. Both Batman and Robin fight against The Joker, The Penguin, The Riddler, and Catwoman all at once in the movie.

Directed by Leslie H. Martinson, Batman starred Adam West as Batman and Burt Ward as Robin. Most of the cast members of the original TV series reprise their roles in the film except Julie Newmar. She played Catwoman in two seasons while Lee Meriwether filled the role in the movie.

The ’90s live-action Batman movies paved the way to the box office successes of superhero films for the next three decades. Warner Bros. brought to the silver screen Tim Burton’s Batman, the first instalment of the original Batman film series.

The original cinematic universe spawned three more Batman movies in eight years. However, each of the films has its unique motif, tone, and depth. Three different actors intriguingly took on the mantle of the Caped Crusader in the ‘90s. These include Michael Keaton, Val Kilmer, and George Clooney.

Now, let’s have a closer look at all four Batman movies to watch in this first viewing order.

Tim Burton’s gothic approach to the 1989 version is the first modern film of the titular DC Comics character. Michael Keaton takes on the mantle of the Caped Crusader while the great Jack Nicholson plays the superhero’s nemesis, Joker.

The 1989 Batman transpires in the superhero’s early war on crime and highlights the clash between the Dark Night and the Joker.

In the film, the Caped Crusader must save the people of Gotham from the deadly Smylex gas unleashed by the madman. The poisonous gas causes victims to laugh hysterically and eventually die with the same Joker grin on their faces.

The Keaton-led Batman movie has set the trend of dark superhero movies hence. It received critical acclaim from film critics and fans. It also saw commercial success, raking in more than $400 million in the box office against a $48 million budget. 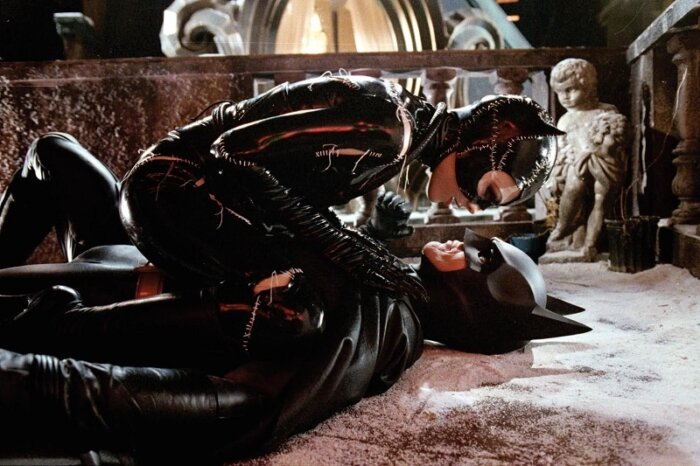 In the sequel, a more powerful Batman faces off with a new nemesis after defeating the Joker. The Penguin, brilliantly played by Danny DeVito, plots to kidnap and kill the firstborn sons of the citizens of Gotham. The villain teams up with sordid millionaire, Max Shreck (Christopher Walken).

Batman, however, finds an ally in Selina Kyle a.k.a. Cat Woman, a fitting role for the seductive Michelle Pfeiffer….