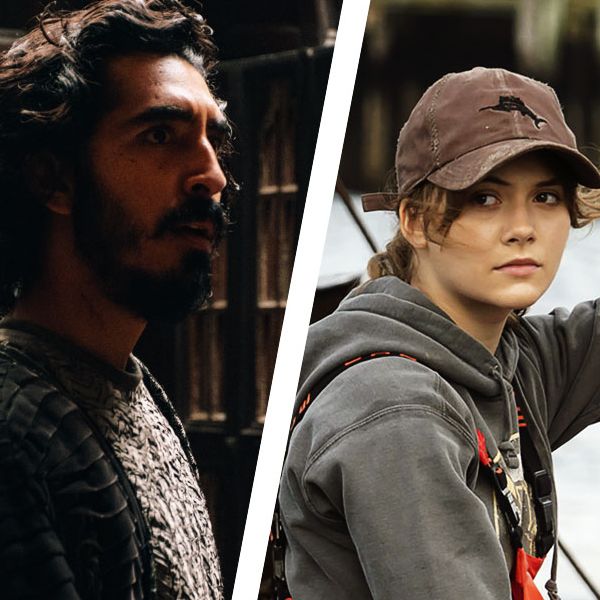 School’s back in session, Starbucks is rolling out the Pumpkin Spice, and like Taylor Swift said, August really has “sipped away like a bottle of wine.” But while summer may be coming to a bittersweet close, at least there’s plenty of things to watch over the long weekend to soften the blow. Read on for a sampling of what’s new and noteworthy to tune on as you unwind this holiday.

We’ll start with the obvious: Marvel has a brand-new theatrical-release-only movie, so we suppose nature is healing. Simu Liu stars as the eponymous MCU hero as he’s drawn back into his father’s (played by the incredible Tony Leung) world of the Ten Rings organization.

Nia DaCosta is making headlines as her Candyman remake hits No. 1 at the box office. The film stars Yahya Abdul-Mateen II and Teyonah Parris as Anthony and Brianna, an artist and an agent, who move into a new apartment only to learn about the area’s terrifying past. You can only watch DaCosta’s Candyman in theaters for now, but with the original 1992 Candyman available to stream, you can do a DIY double feature.

There was a long time where this movie felt like it was only a trailer. But after getting swept up in a number of COVID-related delays, Free Guy finally hit theaters last month, and it’s been doing fairly well. And in true Ryan Reynolds fashion, he tweeted that a sequel has already being green-lit. So, if Reynolds’s humor and the video-game setting appeals to you, then have at it.

If you didn’t have the time to catch David Lowery’s beguiling retelling of the fabled Arthurian tale, have no fear. A24’s slow burn of a film is available to rent and watch at home, but watch closely because this dizzying story really demands your attention.

Sometimes a little brain rot is fine. Press play and clean your house, organize your room, or lie down in your bed and let it roll. And what better way to turn off your brain than by watching Camila Cabello girlbossing her way into selling a dress or with Billy Porter as a fairy godmother called “Fab G” saying, “Yass, future queen, yass.” It’s definitely not the greatest pick on the list, but, hey, we’re giving you options here! (This one is coming out in theaters as well, but why not just watch at home.)

Available in theaters and on Amazon Prime Video.

James Gunn’s not-really-a-sequel sequel to the infamous first Suicide Squad teeters the line between wildly too much and wildly just right, which to be honest feels quite appropriate for a movie that has a person who shoots deadly polka dots, another one who can control rats, and a talking shark. The Suicide Squad really swings for the fences and has an all-star cast to boot, making it one of the most entertaining comic-book movies in a while. If you’ve been waiting for a good time to watch it, this weekend is the best time, as it leaves HBO Max on September 5.

Available to watch on HBO Max.

A perfect family-night pick, CODA tells the story of a teenage CODA — child of Deaf adults — named Ruby (Emilia Jones), who struggles between staying with her family or leaving to study music at the Berklee College of Music. Anchored by some great Rossi family performances from the likes of Marlee Matlin and Troy Kotsur, CODA is the kind of tender coming-of-age film that’s bound to make someone in your movie-night group cry.

It’s incredibly weird to think that concerts are starting up again. The germs! The closeness! It just doesn’t feel the same when you have to constantly think about masks or the space between you and others, which is why it’s nice to have Billie Eilish’s Happier Than Ever concert film. You can see her perform her new album, from start to finish, without the worry of COVID and can watch from the comfort of your own couch. No standing room here.

To sum up Leos Carax’s latest film: WTF. It’s incredibly more rock opera than musical as Adam Driver and Marion Cotillard mumble and sing-speak their way through this film about two lovers and their talented child. Annette is bold and brash and may not be everyone’s cup of tea, but, oh boy, is it something to behold.

Nikole Beckwith’s soft, intimate film, released only earlier this year, is already on Hulu waiting to be discovered. Together Together stars Patti Harrison and Ed Helms as two loners who come together as Harrison’s character Anna becomes a gestational surrogate for Matt (Helms). It’s a beautiful film that’s perfect for those wanting a nice little emotional release. Plus, it’s a lean 90 minutes, so brava.

If you’ve burned through The White Lotus and wondered, What else has Mike White done that I can consume immediately?, then may we reintroduce you to Ned Schneebly in School of Rock, newly available to stream on Netflix. White wrote the movie but also stars in School of Rock as Jack Black’s friend, whose identity Black steals to teach a class of prep-school kids how to rock. Sure, it’s a different vibe than The White Lotus, but it does teach us how to stick it to the man.

Nothing says “let the fall season begin” more than the Great Hall scenes in Harry Potter. The décor alone has HomeGoods moms everywhere shaking. Some muggles may have dreamed of casting spells or riding a broomstick, but the real ones have always dreamed of eating an unlimited amount of chicken drumsticks like Ron Weasley. And thankfully, you have an entire long weekend to relive the cozy comfort of the Harry Potter films now that they’re all once again on HBO Max.

Who knew that Martin Short, Steve Martin, and Selena Gomez would make for such an enjoyable trio? It’s an odd combo for sure, but the vibe of Only Murders in the Building is enticingly fun, following the three as they try to start a podcast and attempt to unravel the mystery behind a strange death in their apartment building. But if true crime isn’t your vibe, then may we suggest Only Murders solely for the fall fashion? With the sweaters, coats, plaid pants, and scarfs, this show really has us running to our closets.

Read More:What to See, Watch, and Stream Over the Long Weekend