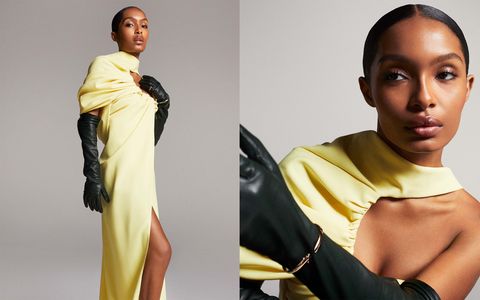 It’s only been three years since Yara Shahidi, 21, officially began “adulting,” but the preternaturally poised actress is already tiring of being responsible for her own life day in and day out. “The worst part is that it’s constant,” Shahidi says jokingly. “This should be a once-a-week activity, friends.” The college senior is tucked away in a minimalist apartment on the East Coast, sounding every bit the grownup as she discusses her final year at Harvard University; 7th Sun Productions, a production outfit she recently launched with her mother; and life after Black-ish, the hit ABC sitcom that made her one of the most sought after young actresses in Hollywood. She does all of this while simultaneously battling a pollen-induced allergy attack that prompts a sneezing fit, several pauses for water, and a lozenge run. It would be a lot for anyone—of any age—but Shahidi remains unflappable and somehow manages to still look luminous despite the all-out attack on her orifices.

“The world,”—cough—”is out to get me,” she deadpans, before taking a deep breath and explaining what motivated her to launch her own company last year. Shahidi was not only eager to see more diverse representation in front of and behind the camera, but she wanted to introduce fresh voices into the Hollywood mix. “Oftentimes with studio systems you get the same list of folks who’ve always had the same opportunities,” she explains. “Breaking [new] people into the studio system, that’s been something that’s been really important to us.”

“Us” is Shahidi and her mother, Keri, co-founder of 7th Sun. The inseparable mother-daughter duo (they Facetime at least 10 times a day) already have a slate of projects on the horizon, including several animated series, an unscripted show dedicated to upliftment, and Smoakland, a comedy about a black female cannabis shop owner in Oakland, California. “Our goal is to really collapse the hierarchy and how power is traditionally disseminated in spaces like this and give people autonomy to have a voice,” says Keri. “That balance of compassion and focus has really moved us forward and it keeps us inspired.” 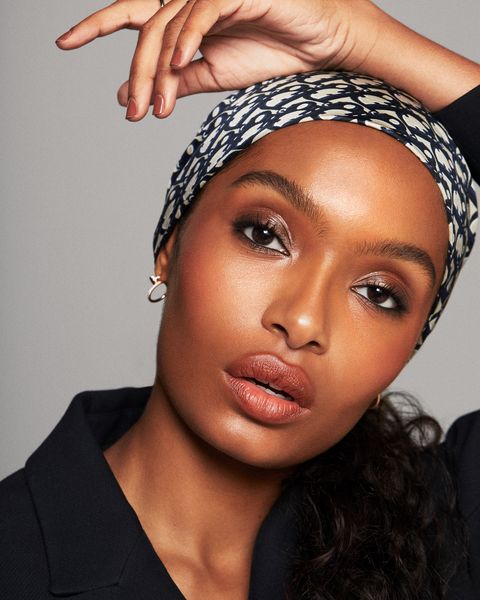 While Shahidi’s character on the coming-of-age comedy Grown-ish, Zoey Johnson, still remains on a madcap quest to find herself, Keri says Yara has been driven since the womb. “I think she was just born an old human,” she shares. “In one space we’re peers, in another space, if you looked at it traditionally, I’m supposed to be the teacher, but teachers come in many shapes and sizes and she’s one of my teachers.” I ask Mama Shahidi about her daughter’s leadership style. “She’s a gentle giant,” Keri proudly states. “She’s really compassionate and I think what balances her compassion is her focus, so nothing is fluff.”

Shahidi’s mission to ensure a more equitable distribution of power, resources and opportunities in her industry—and throughout the world, ultimately—is reflected in the projects she chooses, the products she endorses, the people she hires, and the brands with which she aligns. And over the years there have been no shortage of companies eager to attach themselves to the woke wunderkind. Cartier, Chanel, Adidas, Tory Burch, and Bobbi Brown, just to name a few. Most recently, Dior named Shahidi Global Brand Ambassador for Women’s Fashion and Makeup.

“I never rep products that I don’t actually really like,” Shahidi explains. “I spent all of Grown-ish using [Dior] products and every time you see my face out in the world, even if they’re not tagged, it is a Dior makeup product. And it is the first time in my career in which I can put on a foundation and not end up with a breakout by the end of the day. And we’re working 15-hour days.” Shahidi and her team have brands sign what she calls a “reverse morality clause” as one condition of doing business with her. “You as a company also have to fit within my certain values and if there are moments in which you step outside of that because of something a representative says, then there will be consequences,” she warns.

Shahidi landed her first print ad at six weeks old, started her first corporation, Dharma Driven, at age 8, made her film debut starring opposite Eddie Murphy in Imagine That when she turned 9, and landed Black-ish at 14. She’s won NAACP and Gracie Awards, orchestrated a successful youth voter registration campaign, and made the Forbes 30 Under 30 Hollywood list. Even Oprah has said Shahidi should run for president. First Lady Michelle Obama—who famously wrote one of Shahidi’s Harvard recommendation letters—will be thrilled to know that, despite the demands of starring in and executive producing Grown-ish, double majoring in social studies and African American studies, and advocating for industry-wide inclusivity, she’s also been an ace student. “Straight A semesters,” Shahidi says, humbly flexing. “I’m just a nerd through and through. I remember the first time I had gotten a C on a paper in high school, I literally cried and I was like, ‘This is going to affect my life forever.’” She laughs at the memory. “I’m just built to deeply care about grades.” 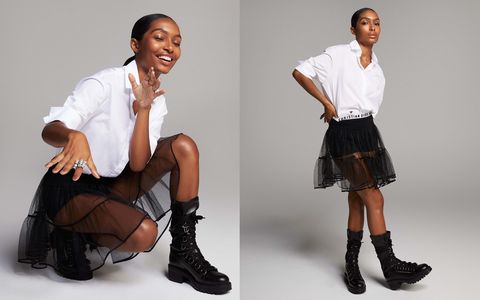 Her success is all that more impressive given that the road from child star to grown celebrity can be a treacherous one filled with scandal, rehab stints, and tragic tales of squandered talent. It helps that she and her two brothers were raised in a family filled with academics and high-achievers. Her mother is a successful commercial actress. Her father, Afshin, an Iranian émigré, is a cinematographer (and Prince’s former photographer). Her cousin is the rapper Nas. There’s even an astronaut in the mix.

Getting off of Twitter has done wonders for me. It’s allowed me the peace of mind to think through what matters to me and why.

What becomes clear within seconds of speaking with Shahidi is that she’s genuinely brilliant, delightfully wry, and seldom at a loss for words. In fact, she has the perfect answer to any question at the ready—that is until I begin to inquire about her love life. When I point out that she has never been publicly linked to anyone romantically, she offers up a sly grin and states, “And I’m not going to be.” After a few more failed attempts to get her to dish about any past or present significant others, our conversation hopscotches across history and contemporary pop culture: Richard Nixon’s war on black youth. Cancel Culture (“Oftentimes Internet culture isn’t necessarily about accountability, which I think is essential, but just about disappearing somebody…”). The pleasures of binge-watching Law & Order SVU (“Stabler’s back!”). And her unabated Frank Ocean obsession (“I think I said two words when we first met,” she confesses. “Everything’s a little more casual now, but I definitely was awkward.”)

If you could have a contemporary artist create a soundtrack for your life, who would it be,” I ask Shahidi, a die-hard music lover and avid record collector.

“Top of mind, I’d have to say André 3000 because I feel like he’d just do a dope job,” she says. “His general versatility constantly astounds me.”

“I’d give him artistic license. I’d be like, ‘do you friend. Whatever you do I’ll be happy with.” 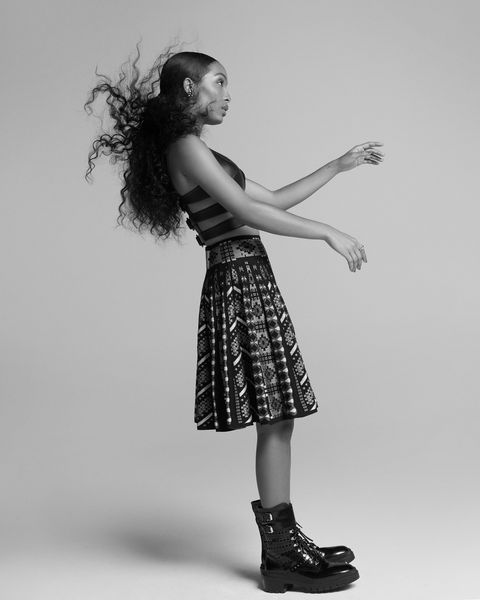 Earlier in the day, Twitter had been ablaze with rumors that Kanye West and Drake…

Read More:Yara Shahidi Is the Voice of a Generation