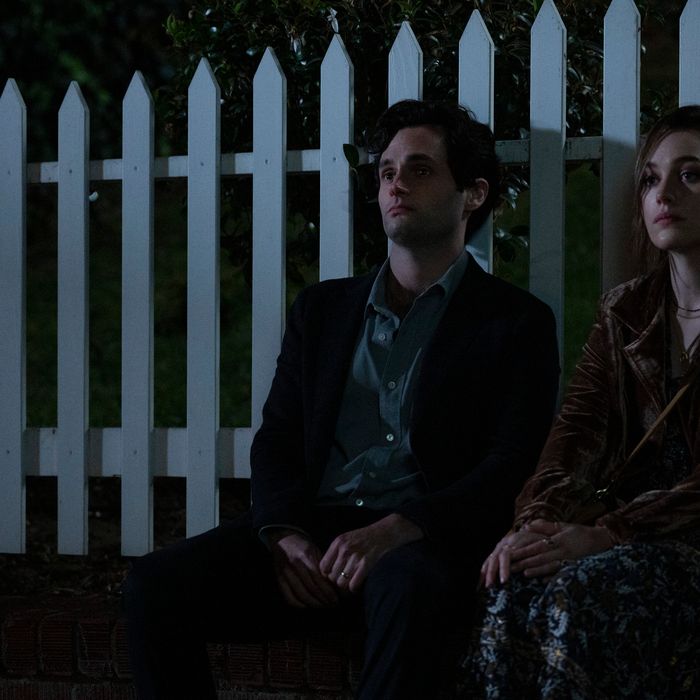 And They Lived Happily Ever After

Los Angeles didn’t work out the way Joe hoped — several homicides, plus he never vibed with the people — and he and Love look to make a fresh start where the grass is green and the public schools are competitive. So the Quinn-Goldberg family settles down in what Joe describes as a “soulless, wealthy suburb outside San Francisco,” Madre Linda. (Of course, this fake place is Spanish for “cute mom,” smh.) It’s a half-hour from a condo owned by grandma (“Glamma,” ew) Dottie.

Nothing in poor Joe’s life is going the way he dreamed it would. He has a dumb son instead of a sacred daughter; his soulmate has killed multiple people with her bare hands (that’s a whole pots-and-kettles situation to unpack another day!); and also, he is realizing now that he never actually gave much thought to what happens after the boy meets the girl. He certainly did not think it would involve having a BOY baby named Henry Forty, as in Forty, the twin who ID’ed Love and Joe as full-on psychopaths and was killed by the cops for his troubles. Also: For someone obsessed with classic literature who feels suffocated by the “white picket fence” purgatory in which he finds himself, you’d think Joe would spend a little less time with Fitzgerald and more time with Cheever, no?

I hope this does not offend the young parents in our readership, but I have to say the first two-thirds of this episode are a real struggle for me. I get that any semi-accurate portrayal of new parenthood has to show how boring and exhausting it is, but depictions of drudgery don’t make for thrilling television. That your once-exciting life is now a constant spray of bodily fluids on top of sleep deprivation is not exactly a shocking or insightful revelation about this stage of life … also I get that the baby wailing every time Joe touches him is supposed to be ~meaningful~, but it’s still a lot of a baby screaming, which, no thank you!! Please skip to the serial killing.

Anyway, Joe can’t connect with Henry. It’s likely because he is reading The Great Gatsby to him instead of The Very Hungry Caterpillar, but Joe thinks it is because this seven-month-old can gaze into his dad’s soul and see the sociopath within. Joe says he only has one part of his old life with him, and I’m like, is it the plexiglass prison for kidnapping and murder??? But it’s just a book press. He sends Ellie the profits from this one-person bookshop which I’m sure really makes a dent in her expenses.

We get more glimpses into Joe’s past, and OF COURSE, it’s that he was left in one of those gothic horror, decrepit stone palaces for wayward boys whose parents didn’t love them — there was a similar setup on Pretty Little Liars which I referred to, affectionately, as Voldemort’s Dickensian Orphanage for the Morally and Mentally Afflicted, but for You, I will update to “Queen’s Gambit Tranquilizer Den for Separating the Weak From the Merely Abandoned.” The “Irving Group Home for Boys” is where Joe was bullied not for any of the likely reasons — his fixation on old hardcover books, having an unusually low voice for a child — but because he insists, against all obvious evidence, that his mother WILL come back for him, she WILL, you guys were all left behind, but Joe definitely wasn’t!!!

Back in Madre Linda, it’s time to meet the new crowd. I, for one, am ecstatic to see Search Party MVP Shalita Grant as Sherry, an insufferable momfluencer who reminds Joe of Peach Salinger (which does not portend well for Sherry!). Sherry mean-girls Love into hanging out with her by saying things like “has your vagina even recovered yet??” and “don’t worry, that class is for people who are really in shape.” Sherry’s married to Cary, who is very hot and also rich but I don’t know how? I feel like they’re all tech douches and/or the children of rich parents and/or both. There’s another couple, Kiki and Brandon, who we don’t know much about yet; later we meet the “unfortunately-named” Andrew and Jackson. And, as fate and the plot demand, the neighbor with whom Joe is totally smitten: Natalie, a realtor married to an older tech entrepreneur, Matthew. I write in my notes: Natalie is pretty, so that’s going to be a problem.

For now, the “you” of the voiceover is Natalie, the object of Joe’s obsession, the green light at the end of his dock (gag). She flirts with him directly (buying him a box of condoms) and indirectly (walking into a library). The librarian (played by Tati Gabrielle, who you may recognize as the coolest of the cool girls from Chilling Adventures of Sabrina) is beautiful because everyone on this show has to be beautiful; it’s a law. Natalie picks out a book for Joe: Tender is the Night, which, as Joe notes, is about marriage and infidelity. (I am choosing to see as an Easter egg for Gossip Girl fans who recall Dan’s vision of himself as a modern-day Fitzgerald chronicling the Upper East Side.)

Natalie uses her techie husband’s powers to get Joe’s phone number — Joe may be outdone in the surveillance department this season — and invites him over for daytime wine. I write in my notes: I’m surprised Joe, who loves classic chivalry and the pursuit, is actually into someone who is pursuing him so aggressively, but then she shatters her wine glass during a toast so her hand gets sliced open and he bandages her up, so all is right in the world. As readers of my recaps know, this all abides by the Inviolable Rules of Television Health and Medicine, which decree that any on-screen injury will not actually be gross but instead will be sexy and require intimate, gentle tending-to by a potential love interest. (Having once sliced my hand open in a kitchen incident, I must say: It is NOT cute! Hands bleed a lot.)

It gets late. They switch to red wine. They both hate Kindles. They’re obviously soulmates. How could Joe have ever loved LOVE when NATALIE was awaiting him all this time?!? Natalie reveals that her husband has cameras in every room in the house and that she disabled them before Joe came over, which will surely raise questions but what else is she to do? Also, she and her husband sleep in separate rooms (which is really not The Thing fiction makes it out to be! ), and she refers to her private nook as a “reading room,” so this evening goes about the way you’d expect. Joe stops himself after an intense kiss to say he only wants to be friends, but this is after he’s swiped a pair of her underwear off the floor, so, ooookay. Also, I assume this wardrobe choice was just so they’d pop on screen, but there’s no way Natalie wears sea-foam green lace panties that look like they’re from the Limited Too.

Joe returns home to report to Love that the neighbor is crazy, but he’s so turned on that he can now kiss and fuck her properly (while clutching Natalie’s underwear in his fist). I will say Love’s whole thing about how “you haven’t had sex with me in months” is a little weird considering she gave birth seven months ago. Like, I know we’re supposed to see that as some sign that Joe is distracted and doesn’t love her anymore but also … she just had a baby! Anyway. Joe thinks Natalie has saved his marriage, lol.

The next night is a big party at Sherry and Cary’s place. I do think it’s funny that Sherry allegedly threw a big party in August 2020 because the über-rich had access to a secret vaccine before everyone else. Joe and Love prepared for this party…